Live Review: Jenny Lewis at The Observatory in Santa Ana (8/25)

An unforgettable night to mark the closing of an era 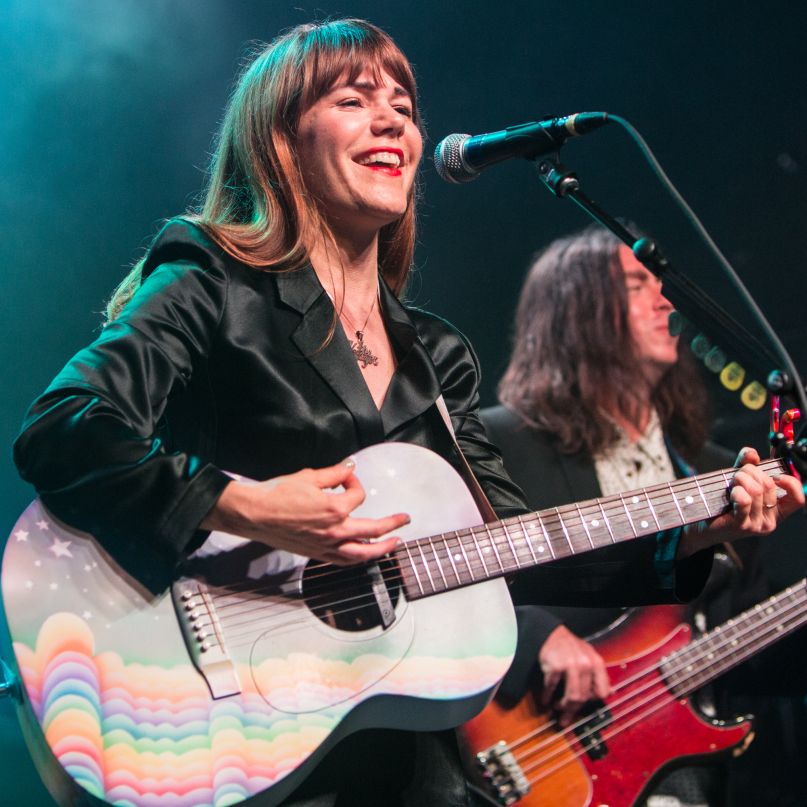 When The Voyager was released in the dog days of summer last year, many wondered exactly what place Jenny Lewis had in the music world. It had been four years since she released her collaboration with boyfriend Johnathan Rice, Jenny and Johnny’s I’m Having Fun Now, and six years since her last solo album, Acid Tongue. Sure, Lewis is never really out of the public spotlight, seemingly always game for a run of tour dates, plus she was a member of the 2013 reunion of the Postal Service. But still, with the waning popularity of aughts indie rock, it was very easy to question whether Lewis and her Voyager would have much of an audience at all.

Now more than a year later, this all seems very silly. By most metrics, the run for The Voyager has been a complete success. It landed in the top 10 on the Billboard 200 upon its debut and has been backed by relentless touring around the globe. These have included standout performances at numerous music festivals, notably Coachella where a mini-Rilo Kiley reunion took place.

The release of The Voyager also coincided with some really fantastic writing about Lewis’ songwriting being highly influential on the listening tastes of a generation of music fans. And it isn’t hard to understand why, as Lewis’ songwriting is characterized by frank, direct, honest, and highly poetic stories about what it is like to be a woman, to be ambitious, to be sexual, to be lonely, and to be, ultimately, triumphant.

Her continued relevance was evident by looking around at the crowd at the Observatory in Santa Ana on Tuesday night. While many of her contemporaries see their crowd grow older as the years pass, Lewis’ still very much defines all-ages, with her songs speaking to the youth of today much as she had with Rilo Kiley more than a decade ago. The generations of young people relating to Lewis’ message have not changed, and while she might not headline the same size venues she did at Rilo Kiley’s peak, the run for The Voyager has to feel like a heartening success.

And this type of success earned Lewis a bit of a celebration, which was what these Santa Ana shows (another is being held today) are billed as. Ending the run of The Voyager, Lewis packed in 20 songs over two hours. The night honored all of her career, with a particular focus on her recent run.

And the festivities were vast, including a mariachi band (with Bright Eyes’ Nate Walcott on trumpet) that set the table with intro music for Lewis and her band. But what came next was even more surprising, when during her opening song, the powerful “Head Underwater”, confetti sprayed on the crowd to coincide with her lyrics proclaiming, “There’s a little bit of magic, everybody has it.”

There was more magic where that came from. Confetti again would rain down during the Rilo Kiley anthem “Portions for Foxes”. Giant balloons were hurled into the audience for “Love U Forever”. Rice made a guest appearance to trade verses with Lewis on “The Next Messiah”. Alone, they were all small gestures at grandeur, but together, they added up to something unforgettable.

Lewis, for her part, was in good spirits throughout the night, despite the emotion clearly present that this portion of her life was coming to a close. She joked about Taylor Swift’s coinciding massive concerts at nearby Staple Center, acknowledged some fans for their dedication to continually attending her concerts, and didn’t flinch when one fan stormed the stage to give her a massive hug, even promising that fan a free comic book after they tried to stage dive and fell hard to the venue’s cement floor.

But the night, the tour, and Lewis’ legacy is always the music, and at this show a couple stood taller than the rest. There was a moment during “A Better Son/Daughter” where only a couple of the balloons were still floating around the audience, and two fans both knew to pop them right at the moment the song explodes. You could see Lewis jump at the sound, but her face grinned in delight, her fans completely in sync with what her band was performing.

And for the night’s final number, it was “Acid Tongue”, played with Lewis’ band gathered around a microphone behind her to perform her backing vocals. This is likely a typical end for a Lewis show, but what might not be as common is the emotion present on her band throughout that song, hugging and touching and sharing glances, completely aware that the tour is winding toward its conclusion. When the song finished, Lewis and her band took a most deserved bow — an unlikely success story from a musician whose future remains as bright as it is unpredictable, with Lewis remaining the voyager in the truest of senses.