Live Review: Incubus, Deftones, Death from Above 1979 at Nikon at Jones Beach Theater (8/5)

Three bands, one amphitheater of people singing in unison 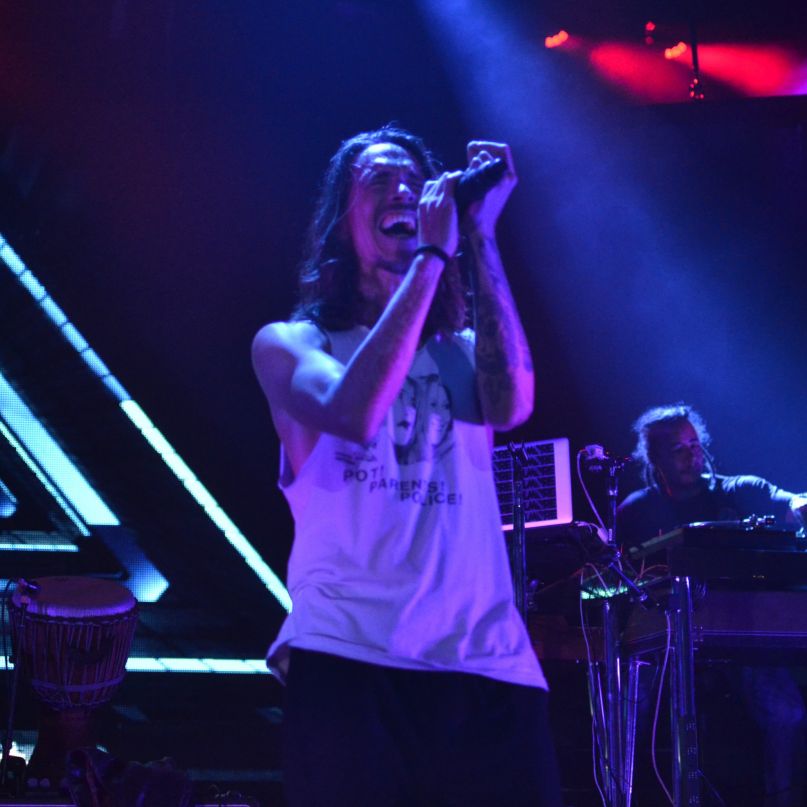 When I was 17, I didn’t drink, smoke, really party, or do anything of particular noteworthiness to have a good time. When you live in a small town, it’s easy to get swallowed up by life without having any particulars to look back at, but I always remember my friend Matt and I driving around the lake and singing at the top of our lungs to Red Hot Chili Peppers and Incubus. Years later, when a friend of ours died too young, it was an unspoken way of sharing the loss. We drove around the lake, a 45- or 50-minute drive in total, and without conversation belted at the top of our lungs albums like Californication, Morning View, and Make Yourself.

It’s easy to cash in on trying to capture that feeling of being 17 and driving around the lake. Tenth anniversary tours, reunions, movie remakes, prequels and sequels: Stripped to their most bare, these things exist as a way to pursue what was, not what is. It was easy to walk into the Nikon at Jones Beach Theater with a bill of Death from Above 1979, Deftones, and Incubus, and think the night would be a run through the motions to empty crowd pockets, more Terminator Genisys than Mad Max: Fury Road.

But from the start, it wasn’t like that. Death from Above 1979 played only three songs from You’re a Woman, I’m a Machine, sounding tight musically, though Sebastien Grainger sounded like he exhausted his stretched-thin voice and needed some rest to recover. Deftones came on and crushed, doing things I never suspected they could do live — like when Chino Moreno performed (and nailed) the first third of the vocal solo to “Knife Prty”, or when they united thousands of people through lifted fists and banging heads on “Change (In the House of Flies)”.

I came to this show to see all the bands, but I took Matt with me for a reason: Incubus. The Island Records rock band quietly released an EP earlier this year that, following 2011’s mediocre-at-best If Not Now, When?, felt like a breath of fresh air, a life preserver grabbed just as the head cut below water. They opened with a quirky but loyal cover of the theme to Christopher Nolan’s Interstellar — composed by Hans Zimmer, whose studio they used to record this year’s EP, Trust Fall (Side A). The details don’t really matter, though.

What matters is when they dropped a four-bar rendition of Rage Against the Machine’s “Bulls on Parade”, over 10,000 were ready to riot. When they threw in a brief version of Nirvana’s “Come as You Are” to the bridge of “Megalomaniac”, that same mass of people sung along. As singer Brandon Boyd sometimes wore a demonic mask or played percussion and the band extended jams over older tunes and flung themselves around on new ones, no moment felt dull. I had my earplugs in from the heavier tunes — and there were plenty, as they did songs off every album from S.C.I.E.N.C.E. to today — but I took them out during “I Miss You”.

The song is about as objectifying as Incubus ever got, or at least as tacky: “I see your picture, I smell your skin on/ The empty pillow next to mine/ You have only been gone 10 days, but already/ I’m wasting away.” But through my earplugs, something felt different, and Matt — the same one I drove around the lake with — tapped my shoulder and said, “Literally everyone is singing.” I pulled out my earplugs and listened.

For a moment in time, an entire amphitheater of people sung in unison. Boyd or someone else calling the shots in the band noticed, and on “I know I’ll see you again, whether far or soon,” all the instruments and vocals stopped, leaving only the fans singing acapella. The “crowd-sings-instead-of-the-vocalist” routine gets stale fast when it is a routine, but this didn’t have that look, that smell, or that feel of being plotted.

It felt like Boyd was sitting next to you, and thought it was amazing that this herd of teenagers and twentysomethings could know all the words to a romantic goodbye from 1999. It felt like slipping on headphones and not thinking about anything other than how beautiful music can sound. It felt like I was driving around the lake with my best friend, saying all we’d ever need to say about love and loss without ever saying a word.