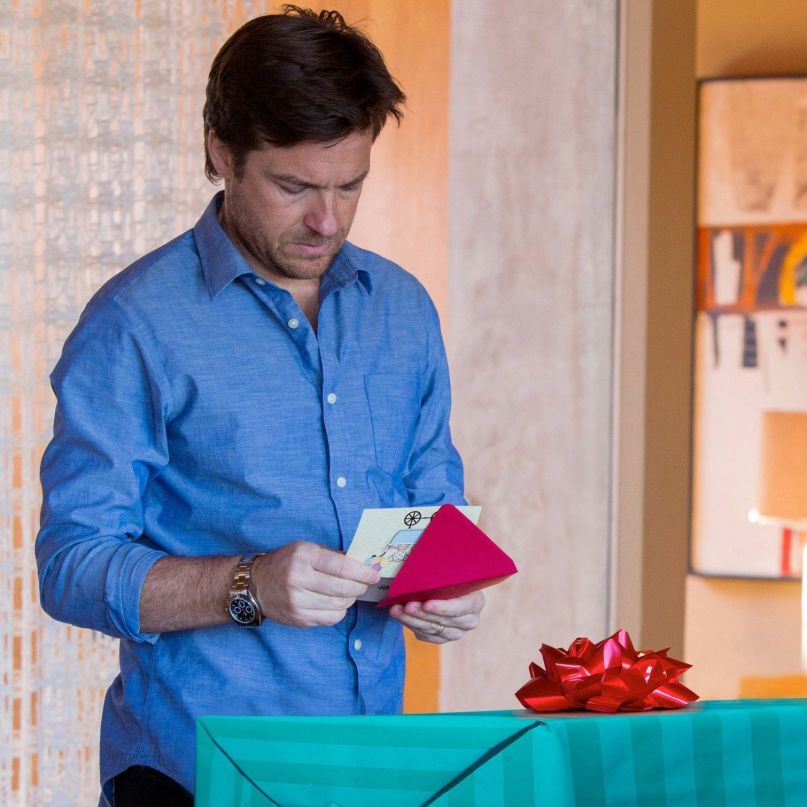 The Gift is a Blumhouse Productions thriller of a different kind. It’s a riveting film, a striking feature-length debut for writer/director/co-star Joel Edgerton that sees him dig into the depths of human cruelty in order to stage a morality play less concerned with jump scares or supernatural vagaries than it is with the vicious things people do to one another, and the often dubious justifications that engender them. The Gift burns slow, far more concerned with character than it is with easy shocks, and it’s because of this that when those do come, they hit all the harder. Novel stuff, huh?

Simon (Jason Bateman) leads an idyllic life. He has the Southern California home with the sleek, modern architecture. He and his wife Robyn (Rebecca Hall) have left Chicago and the woes it visited upon them (woes left unspoken for much of the film). They’re ready to start a new life: Simon has a new job, one cushy enough that it’s no big deal if Robyn doesn’t find a job right away (or at all), they have new friends, they have a new home. It’s a new start — all is well.

That is until a chance encounter at a homewares store reunites Simon with Gordo (Edgerton). Gordo was the “weird kid” in high school, so it’s clear that he and the snake-charming Simon were never the best of friends, but they’re nevertheless pleasant to one another upon crossing paths. And even though Gordo’s social skills really don’t seem to have evolved since then, Robyn encourages Simon to give the awkward but well-meaning man a chance. Soon, Gordo is leaving gifts of increasing quality at their home on a regular basis, inviting himself over, and doing whatever he can to insinuate himself into Simon and Robyn’s lives.

Where Robyn is put off but reticent to push Gordo away, Simon just wants him to leave. And there’s seemingly no reason for this. Or is there? Sure, the gifts are weird. And it’s even weirder when Gordo’s able to recall, in vivid detail, stories from high school that not even Simon can remember. Soon, the visits become more frequent, frequent enough that Robyn and Simon have to stop and really consider who Gordo is, and whether he’s just an odd bird or a threat worth addressing in further detail.

The Gift allows its escalating tensions to unfold at a deliberate pace in a way that’s never grating or unearned. While the film doesn’t reveal its true hand until its very last moments, Edgerton’s screenplay has a masterful command of when to mete out information and when to let you wonder just who the real monsters are. His direction, while simple, allows for atmosphere to rule the day, and eventually cloaks the film in a constant lingering paranoia that perfectly mirrors Hall’s growing terror as she has to wander her too-open house day after day, her past struggles colliding with the fear that maybe Simon’s wrong, Gordo isn’t a threat, and it’s her own frail psyche that’s making every shower a menacing affair.

The film proposes a gender-bent Fatal Attraction scenario up to a point, but what seems to interest Edgerton as a filmmaker the most is the versions of our lives we build up with time and hindsight as our greatest weapons. The lies that become a necessary part of growing older, moving on, and living one’s life. To that effect, if Edgerton’s maladroit Gordo is just a shade unconvincing (his performance is so deliberately bumbling that it’s his least successful pursuit of the three on display here), then Bateman has never been more perfectly cast as the smugly confident Simon. It’s by far the actor’s most assured dramatic performance to date, and it allows Bateman to tap into the condescension and above-it-all attitude played so perfectly for comedy in Arrested Development and elsewhere to play a different kind of joker, the kind who doesn’t know how to tell when some of the jokes hurt.

The Gift is a tense, measured, and ultimately painful film about regret and the lack thereof, and like the best potboilers, it offers no easy answers even when all of its many buried resentments and revelations come to light. To return to where we began, The Gift isn’t a typical thriller. It’s a viciously realistic one, piercing in its candor.