Advance Base – Nephew in the Wild 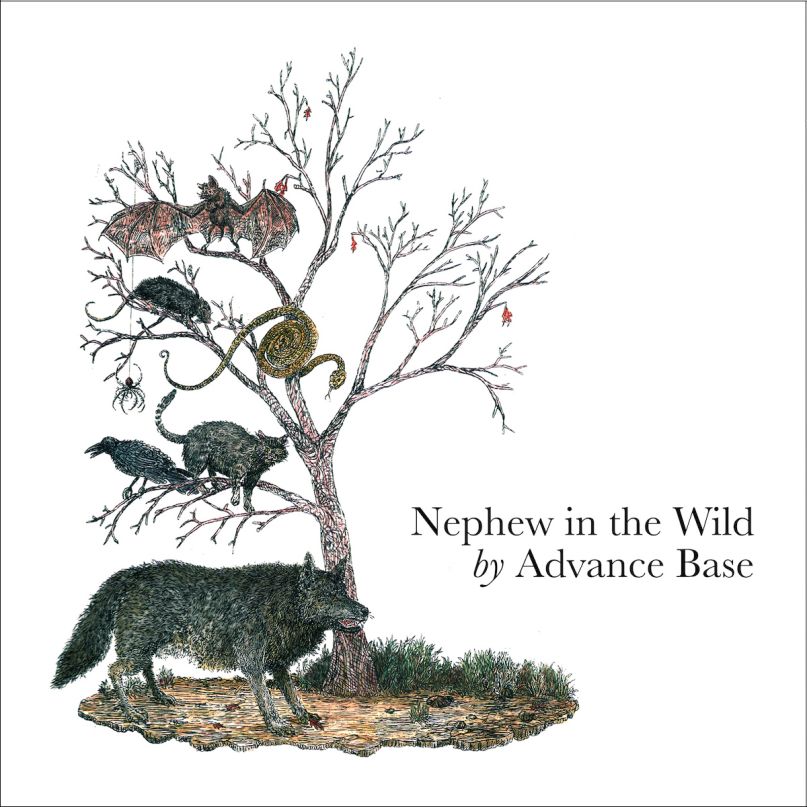 A teacher of mine used to say, “Your name walks into a room before you do.” A Google search suggests this isn’t the platitude I’d assumed it was, but the sentiment remains: People will have a conception and judgment of you before you even interact with them. I don’t think he literally meant “name” — rather, reputation — but in music, a name can certainly make a big difference. So it makes sense that Owen Ashworth was ready to move on from the moniker Casiotone for the Painfully Alone. Before he walked into a room, people could assume they were in for some lo-fi keyboards and sadness. For a good stretch of his career, they weren’t wrong. But things started to change, and Ashworth struck upon a new name: Advance Base, taking on the title of an Antarctic meteorological research station where Admiral Richard E. Byrd spent five months alone, eventually almost dying of carbon monoxide poisoning. A particularly tragic slice of Byrd’s Wikipedia page gives more detail: “Unusual radio transmissions from Byrd finally began to alarm the men at the base camp, who then attempted to go to Advance Base. The first two trips were failures due to darkness, snow, and mechanical troubles.”

Listening to 2012’s A Shut-In’s Prayer and now Nephew in the Wild, the name suits the shift in Ashworth’s music. He’s still singing dark, isolated tales; these are the unusual transmissions from his head. But they’re no longer completely cut off. There are people trying to reach him, and though he might sometimes sound like the darkness and snow might keep them at bay, there are also clear signs that life has rescued him. In an interview with the Chicago Reader, Ashworth details his new life as a husband, father, and homeowner in the suburbs of Chicago. That said, he’s not singing about mowing the lawn on Sundays and taking the kids to swim class — in fact, there are plenty of sad stories of broken humans, even references to Satan. But his settled life gives his songs a root. Listening to Nephew, you’re less likely to think Ashworth himself will collapse under the weight of these emotions; he sings about all of the busted up lower-middle-class reality of a Raymond Carver collection or a set from Mark Kozelek, but with a resigned shrug or hopeful, pained half-smile in place of the aggression, exasperation, and vitriol.

Part of that resilience and sense of stability comes with the musical change from CTFPA to Advance Base. Maybe Ashworth switched from Casio keyboards to electric organs because he can fit them in that new basement, but they also fit the graceful, fragile Americana of his new songs. While he sang his CTFPA melodies in a flat sigh, here he opens up to fill the space. There are still drum machine beats and apologies, but the mix burns softly with a honey-brown tone.

Lyrically, some of the songs read more like short stories than diary entries. In that Reader profile, Ashworth also explained his wife’s obsession with horror films during her pregnancy, and how they often feature fear of children (Rosemary’s Baby, The Omen), and how he’s now powered by a fear for his children. The haunting “Pamela” carries this anxiety beautifully. “She worked at Dairy Queen,” he begins in describing a girl born to teenage parents, then an unexpected twist: “No matter how she cleaned/ She still had the smell of death in her hair.” It gets worse from there. “You are the devil’s kin/ Sign of the beast on your skin,” he adds, a real sense of concern and care in his voice. On “Summon Satan”, he details an errant attempt to contact dark forces, leaving a portal to hell on the kitchen wall of the protagonist’s parents’ home. “The demons you released that day/ Stayed with you along your way/ Screaming in your ear, ‘Kill them all,'” he sings. The rest of the song makes it clear this curse could be a metaphor for mental illness and the dark feelings those afflictions harbor: “You can worry about the future, you can worry about the past, you can worry about how long this loneliness will last.”

Ashworth also includes a pair of songs with Christmas in the title (“Christmas in Dearborn”, “Christmas in Milwaukee”), the Antarctic snow of his name reinforced in approachable yet still potentially painful and isolating Midwestern winter, and with appropriately Midwestern heartache and exquisite detail. With guest vocals from previous Ashworth collaborator Jody Weinmann, “My Love for You Is Like a Puppy Underfoot” echoes Stephen Merritt in its quirky, broken devotion (“My love for you is like a puppy underfoot/ Better watch my step, you know I could trample it”). Next, “The Only Other Girl from Back Home” tells a first-person story of teens escaping home in favor of Lansing, Michigan, taking home coworkers at a restaurant job, and a burnt-down high school. Nephew in the Wild isn’t Ashworth’s most consistent or tightest album, but it shows an ambitious songwriter with a plethora of ideas and a new confidence. That comes through most clearly in closer “Kitty Winn”, the song that seems to come straight through the singer, rather than telling someone else’s story. “I’m not out looking for something I haven’t found/ You won’t see me around, I’ve got a family now,” he sings over simple, insistent electronic chords, not exactly beaming, but smiling subtly, like a true Midwestern suburban dad — one who happens to be an excellent songwriter.