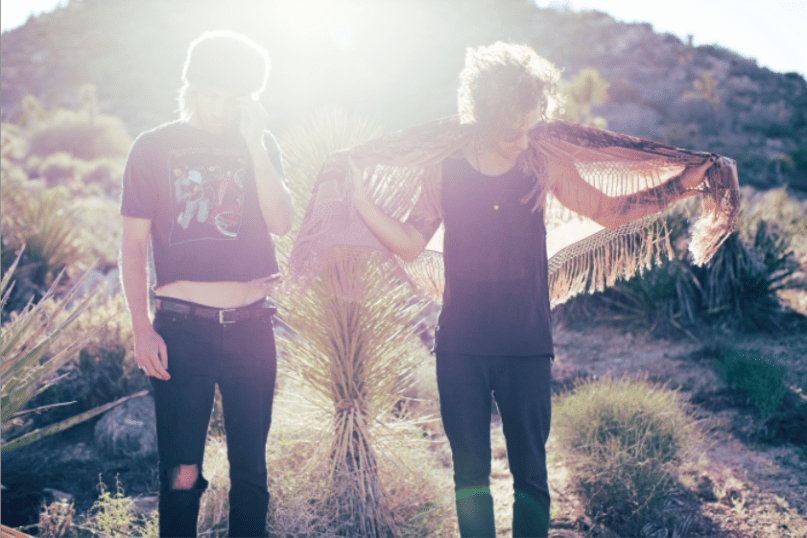 SWIMM founders Chris Hess and Adam Winn have been together from the very start, through the thick and the thin. Even as the indie pop outfit relocated from its modest Space Coast, Florida hometown to the bright lights of Los Angeles, they embraced the transition with the help of one another’s support. It’s no surprise, then, that one of the group’s earliest and most passionate tracks is also one that happens to shine a light on Hess and Winn’s creative chemistry.

“All the Time”, the second single off SWIMM’s forthcoming Beverly Hells EP, couples a gorgeous mix of sunny guitars and beachy breeziness with more pensive lyrics centered on the band’s internal workings. “‘All the Time’ is mostly about Adam and I,” Hess explains to Consequence of Sound. “He and I have been working on music together for years. I could probably count on one hand the number of weeks we’ve been apart in the last five years. We basically feel like extensions of each other at this point.  But we are total opposites in some big ways and that’s what ‘All the Time’ is about. The chorus is, ‘I want it all the time’ and ‘you worry all the time.’  Basically I tend to want more, and Adam tends to worry more.”

The track also captures the doubt that most groups face early in their career. Hess continues, noting that the song “is about how a couple people in a band can have stars in their eyes, feel as though every little decision they make could be life-changing, and that what they’re doing is super important, they are on the edge of everything… But maybe there is a lingering thought in the back of the mind that maybe it’s nothing?”

If the latest song is any indication of SWIMM’s future, I think it’s safe to say Winn and Hess needn’t worry so much. Listen in below.

“All the Time” will be available for purchase beginning Friday; pre-order it here. Meanwhile, SWIMM’s sophomore EP, which features the previously released title track “Beverly Hells”, is slated for a fall release through 24west Records.