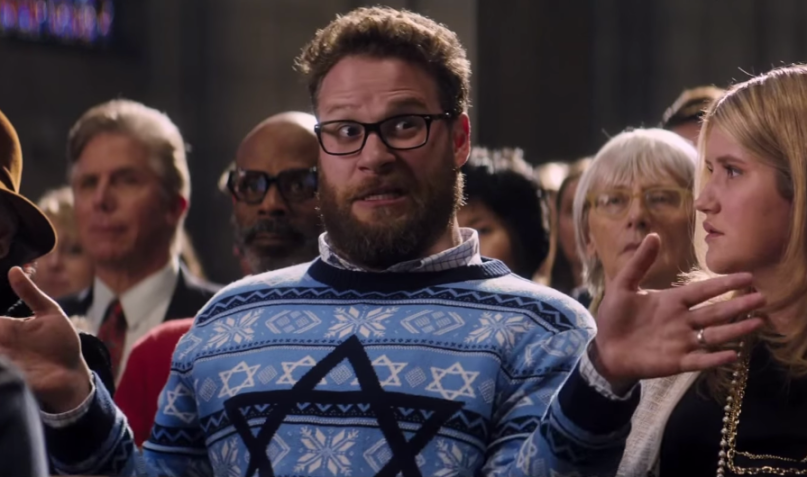 I’ve said it before and I’ll say it again; Christmas doesn’t have enough hallucinogenic drugs associated with it. That may be about to change though, as Seth Rogen’s new yuletide comedy The Night Before finds him tripping on mushrooms and puking at Christmas mass.

Rogen stars alongside Joseph Gordon-Levitt and Anthony Mackie in the film, with the three playing longtime friends who have a tradition of reuniting every Christmas Eve to celebrate together in unusual fashion. Watch the trailer below.

The premise of this film has already carved out a special niche for it among other Christmas films and it hasn’t even been released yet. It’s A Wonderful Life doesn’t have anyone shouting Wu-Tang lyrics at an unborn child. There’s no cocaine gifts in White Christmas, despite the name. And for whatever reason, no one pours a 40 out for the dearly departed in Love, Actually. I’m eager to see how else The Night Before plays with Christmas movie tropes, as well as the usual Rogen fare of cultural satire. The Kanye West-Big crossover reference is a trailer highlight for sure, as is Rogen’s conversation with a plastic wise man in a nativity scene.

The Night Before was directed by Jonathan Levine (50/50) and also stars Mindy Kaling, Lizzy Caplan, Jillian Bell, and is rumored to feature a cameo from Kanye West. It’s due out in theaters November 25th, so start stocking up on eggnog now.