Pee-wee’s Big Adventure Turns 30: An ‘80s Action Flick for the Rest of Us 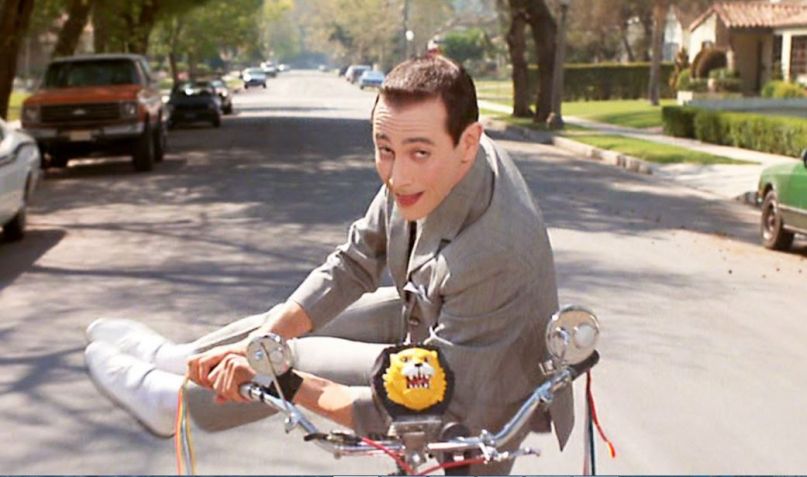 At the end of 1985’s Rambo: First Blood Part II, after single-handedly rebooting the Vietnam War and rescuing a bunch of POWs, Sylvester Stallone returns to his base and tells his commander that he, like fellow ‘80s hero Bono, still hasn’t found what he’s looking for.

“I want, what they want, and every other guy who came over here and spilled his guts and gave everything he had wants,” grunts Stallone, as only he can. “For our country to love us as much as we love it!”

The stakes are lower in Pee-wee’s Big Adventure, which hit theaters 30 years ago next month, on August 9, 1985 — three months after the Rambo sequel. Portrayed by his creator, comic mastermind Paul Reubens, Pee-wee just wants his nifty red bike back, though he sees its theft as a matter of global importance.

“What leads you to believe the Soviets were involved?” a female police officer asks Pee-wee early in the film, right after his prized possession has been plucked off the street.

He never answers the question — it’s just one of the many tossed-off jokes in director Tim Burton’s timeless feature-length debut — but even without delving into Cold War politics, Pee-wee emerges as an alternative ‘80s action star, an unlikely hero in a decade of testosterone-fueled shoot-‘em-ups.

He’s the anti-Stallone/Schwarzenegger/Norris: a giggly 98-pound man-child who uses his keen mechanical skills not to affix bombs to the ends of arrows, but to rig up elaborate Rube Goldberg machines to prepare simple meals.

Stallone eats guys like Mr. T for breakfast. (See: Rocky III) Pee-wee literally eats Mr. T cereal for breakfast. Rambo wears a red headband; Pee-wee rocks a red bowtie. And so on and so forth.

In a weird way, though, Pee-wee was the perfect hero for the ‘80s. He arrived at a time when commie-fearing politicians like Ronald Reagan were evoking America’s good-old days, and films like Back to the Future were playing on the nation’s collective longing for the simpler times of the ‘50s and early ‘60s. Pee-wee’s Big Adventure is set in the ‘80s, but Reubens’ iconic character is a throwback to another era — that supposedly wholesome time when people were decent to one another and kids didn’t even need to lock up their bikes.

Of course, that’s all bullshit, and the implications of those lies are right there in Pee-wee’s subversive persona. He’s a good-natured and charming until he’s not — and then he’s kind of a dick. Witness the kick he gets from taunting arch nemesis Francis in the beginning of the movie or the way he turns tyrannical when mobilizing his friends to help him find the missing bike.

There’s something creepy about Pee-wee’s shit-eating grin and nonstop laughing, and when he dons a dress to help Mickey the escaped convict evade the police or ignores the amorous advances of Dottie the pet-shop clerk, he’s not simply revealing his boyish innocence. The Pee-wee character is a grown-ass man, not a prepubescent kid, and it’s hard to believe there’s not some sexual subtext — a slight suggestion that the goofy guy down the street might be dabbling in things society finds deviant.

Pee-wee isn’t merely riffing on nostalgia. With his faux-rebel posturing — “You don’t wanna get mixed up with a guy like me” — he’s toying with Regan-era notions of masculinity, presenting a Great American Hero for kids raised on Saturday Night Live and MTV. His words are funny because he’s not a rebel, and yet also because he is. He doesn’t dress or act like everyone else, and once he’s on a mission, nothing — not ghost truckers, jealous boyfriends, biker gangs, or Warner Bros. security guards — will stop him.

Curiously, in 1985, both Rambo and Pee-wee had to revisit scenes of crushing American military defeats to complete their quests. Tellingly, Pee-wee’s tour of the Alamo — where a phony psychic tells him he’ll find his bike — ends with Tina the tour guide completely glossing over the bloodshed that occurred there. The only things anyone stands to learn from her lecture: tortillas are made from corn, and there’s no basement on the premises. Then, everyone but Pee-wee already knew that last part.

Tina’s smiley whitewashing of Texas history is a reminder of how presentation trumps truth — a key takeaway of the Reagan years. Burton and Reubens further make that point in the film-within-a-film finale, as Pee-wee’s story gets retold in the form of an exaggerated Hollywood blockbuster called, you guessed it, Pee-wee’s Big Adventure. Featuring the dashing James Brolin as P.W. Herman — the antithesis of Pee-wee in every way possible — the meta-movie is meant to spoof James Bond, not Rambo, but the message is the same.

Brolin’s bearded, blow-dried secret agent is masculine to the point of ridiculousness, a symbol of American virility and virtue as laughable as the shifty-eyed bellhop Pee-wee gets to play. At least Pee-wee’s in on the joke.