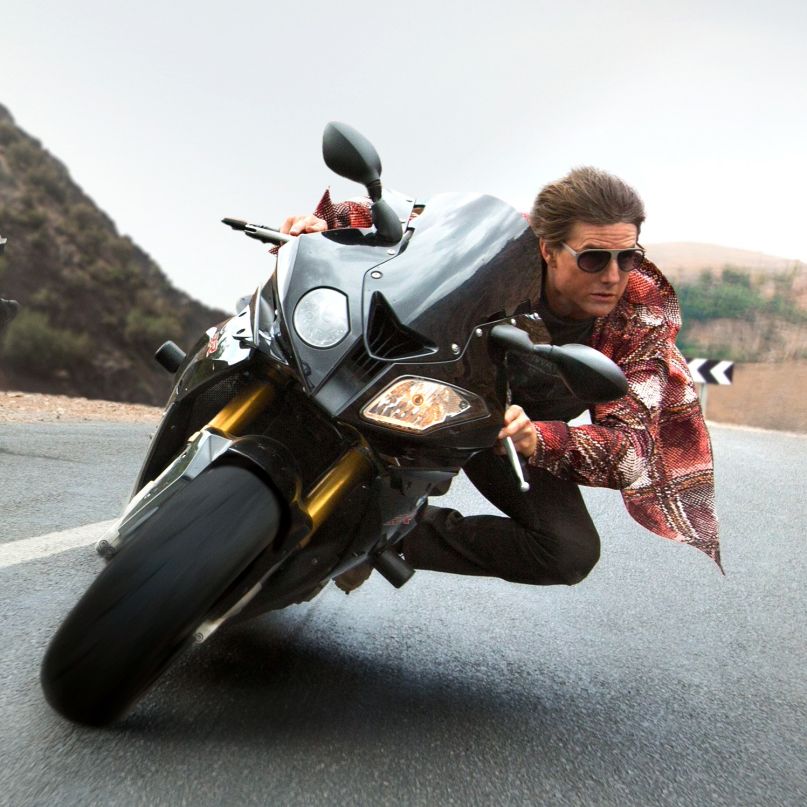 Tom Cruise is willing to hang off the door of an airplane as it takes off for your entertainment. What more do you want from him? How about speeding around on a motorcycle through the twists and turns of a Moroccan highway? Holding his breath underwater for more than five minutes do anything for you? Cruise always goes above and beyond in his Mission: Impossible series, and his work in Rogue Nation is no exception.

Ethan Hunt (Cruise) returns, this time on the hunt for The Syndicate, a group of disavowed spies led by Solomon Lane (an against-type, clean-cut, soft-spoken Sean Harris) who are hell-bent on changing the world one dead leader at a time. Normally this would be an ideal case for Hunt’s IMF teammates, but that program has been shut down by another initialed government agency: the CIA. Undeterred, Hunt sets off on missions that seem impossible, but thanks to the aid of Luther (Ving Rhames, returning full-time), by-the-books-ish Brandt (Ghost Protocol’s Jeremy Renner), and computer whiz Benji (Simon Pegg), mission success rates end up looking rather possible. Benji is to M:I what Chloe was to 24 – you couldn’t imagine them in their respective series to begin with, but now you can’t imagine their series without them.

A new addition to the team (kind of) is Rebecca Ferguson’s Ilsa, a spy in Lane’s organization (or is she?). She’s a mystery in an enigma wrapped up in an enigma inside of a mystery, but her storyline never becomes too complicated. Rogue Nation keeps it simple in the plot department, but never comes off simplistic. As for her action, she matches Hunt stunt for stunt, even going so far as saving the day on more than one occasion. She even finds time to take off her heels before each beat down. What a thought!

Rogue Nation is the perfect antidote to a summer full of disappointing sequels, reboots, and retreads (Fury Road being the obvious exception). Re-teaming with Christopher McQuarrie (Jack Reacher), Cruise takes his team on another globetrotting adventure from Austria to Morocco to London, never afraid to up the ante when it comes to action set pieces, but most importantly, bookending every scene with a wink and a smile. Over the past decade, the Mission: Impossible series has become the new old James Bond series.

Not that there’s anything wrong with new Bond. The Daniel Craig films are fantastic (for the most part) in their own right, but there is an element of fun missing. There are more laughs in the first half hour of Rogue Nation than there are in the entirety of the Craig era thanks to the great interplay between CIA chief Hunley (Alec Baldwin) and Brandt and the dependable comedic stylings of Pegg. Cruise himself provides comic relief during a fight high in the rafters of an opera house, annoyed at how bad things are going for him. Another moment takes place just before a car chase that I don’t dare spoil here.

The most surprising aspect of Rogue Nation is how contained it feels by the time its finale rolls around. We live in an era where no less than a dozen buildings must come crumbling down during an action climax, usually joined together with double-that-number in explosions. How refreshing it is that McQuarrie chose to keep it cool. While he doesn’t leave his “style” on the film in a way that de Palma, Abrams, Bird, or even Woo were able to do, it’s to his benefit. The impression he leaves behind is how and when to dial it back. The amount of restraint shown in the film’s final 20 minutes is positively shocking. That it was a post-production decision proves that sometimes it’s okay to go back and tinker on something thought complete. Just make it count.

Mission: Impossible – Rogue Nation is the best action movie to hit theaters since Mad Max Rockatansky answered our cries back in May, making it the best action movie this summer by far. Enough can’t be said about the aforementioned action sequences; they truly have to be seen to be believed. It’s a testament to the tireless Tom Cruise, who refuses to rest on his laurels when it comes to a franchise that is basically his. One can only imagine what he’s got up his sleeves for the next M:I entry, and I for one can’t wait to find out.