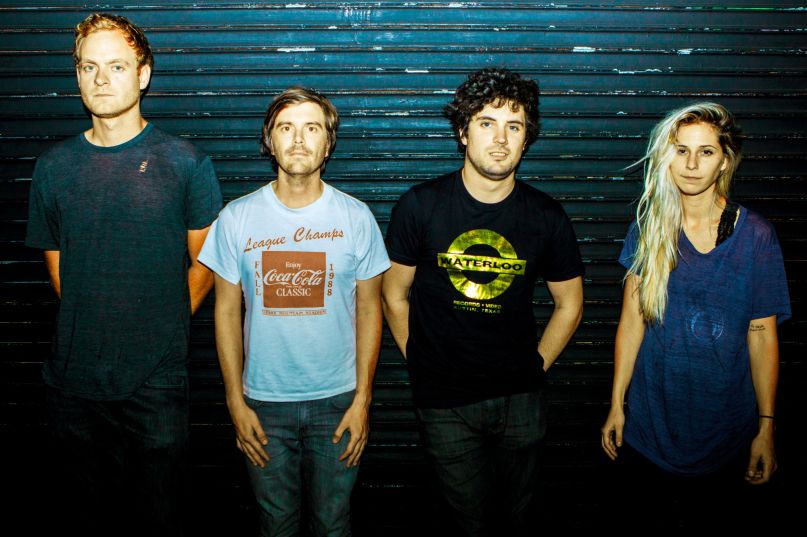 A couple days after Bully wraps their tour opening for Best Coast at substantially sized theaters across America, the band punctuates the trek with an industry-crowd performance at a nameless high-end bar in Los Angeles. The Nashville four-piece is easy to spot before their set, as they are some of the few T-shirt and jeans types among the well-dressed attendees. In small talk, they all seem as down to earth as their get-ups suggest.

Ahead of the set, bassist Reece Lazarus worries that, given the setting, this show might be the worst first impression of their live act, but it’s not. The music translates to the space and the audience is respectful and attentive. The band plays well even if the room, or the 9 p.m. start time, doesn’t necessarily cater to a traditional rock show atmosphere. Most of all, there is a looseness to the group, rounded out by guitarist and singer Alicia Bognanno, drummer Stewart Copeland, and guitarist Clayton Parker, bolstered by the fact their debut album, Feels Like, has just been released to a remarkably positive response from both critics and fans.

Bully’s fans at this event range from Best Coast’s Bobb Bruno, who’s sitting front and center, to Foster the People’s Mark Foster, mingling in the back. Though the band chit-chats ahead of their performance, there is a sense that they are not completely comfortable in this scene. Their music adds to that impression: Loud and scruffy, its attitude comes not just from the sonics but from Bognanno’s honest and direct lyrics.

A couple weeks earlier, speaking by phone from where she grew up after a tour stop in Minneapolis, Bognanno expands on the words to her songs.

“A lot of times I’ll be writing lyrics down, then when I go back to them I realize that they just don’t make sense,” she says. “And in terms of the goals of honesty and clarity in the lyrics, when I was writing, I always want to write a song that makes sense. That sounds really basic, but I want to avoid contradicting myself lyrically, and it is easier for me to work through songs by making sure I know what I am meaning to say at all times. I like honesty in songwriting, and sometimes it can come off as more abrasive than teetering around what you are trying to say, and I like that, too.”

Bognanno cites the bravery in Liz Phair’s Fuck and Run as an inspiration, and also the artistry of Paul Westerberg. “It seems like Westerberg isn’t even trying,” she says, “but all of his lyrics are so good to me. They are so pretty, and it seems unintentional. Someone told me once that if you called the Replacements poetic to their face, they’d probably spit on the floor.”

“Eventually I’d like to become a little more poetic, because my lyrics can be a little cut and dry,” she adds. “This has all been just a way to get better at writing songs.”

But lyrics are only part of Bognanno’s role in Bully. She handles some logistics for the band, claiming to have bombed the merch order for the tour, running out of many items after just a few shows. And it’s been well documented that Bognanno also produced the Bully record, having a background in audio engineering from studying under Steve Albini. In an interview with NME, Albini raved about Bognanno, saying, “Alicia is maybe the top student intern we’ve ever had. Her work ethic was tireless and constant. She was a fucking joy to have in the studio. If everybody in the studio worked as hard as Alicia then everybody’s records would be Number One hits.”

When I read this quote to Bognanno, she can’t help but laugh hearing one of the titans in music production say the nicest things about her.

“When I was first introduced to Electrical Audio in college, I was drawn in because of the tape machines,” she says. “I’d done my research about the technical aspects of it, but on the music side, I wasn’t as informed. I was going there more because of the way they did things and not because of the actual records that had been tracked there. But I look up to Steve [Albini] and all the engineers there so much. They are so smart and so professional and it is a really great place to be. It’s hard to not work really hard when you are surrounded by people that are so fucking talented.”

Though her education is in the technical aspect of music making, Bognanno considers herself equally invested in the songwriting element of Bully. Being on tour, Bognanno notes a worry that her production chops might not be kept up as much as she’d like. “It is so hard to find good books or videos about analog recording,” she says. “And not just what it’s like and what tape sounds like, but about the process and about the mechanics of the machines. I’ve tried so hard to find ways to keep up and keep studying and get better, but I get so stressed out being on the road that we are going to record the second record and I’m not going to be able to do it because we’ve been gone touring so much.”

Not that her pursuit of becoming a music engineer was ever completely easy or welcoming. Bognanno recalls her first courses when she was either the only woman or one of two or three in the class, but sees the positive in the experience. “Obviously, it was intimidating at the time, but in hindsight, it pushed me to do a better job,” she says. “I remember my senior year, we had to partner up to do studio time, and I thought, ‘There is no way I’m going to partner up with one of these guys, because they are totally going to take over.’ And it was an odd number of students, so I asked my teacher if I could work alone and she let me do that. That taught me to overcome so many problems in the studio that, if I’d had a partner, I could have leaned on.”

Still, Bognanno has noticed more female live sound engineers as her band tours the country, noting that it is no longer a rarity. “If someone if going to give you shit for being a female engineer, they need to get real,” she says. “It’s 2015. Get your shit together.”

From Bognanno’s engineering courses to Bully’s rise in the Nashville scene, self-reliance has now become a way of being for the band. It isn’t just fancy LA bars that the band doesn’t quite fit in; it’s almost anywhere, and that seems to be the way they want it.