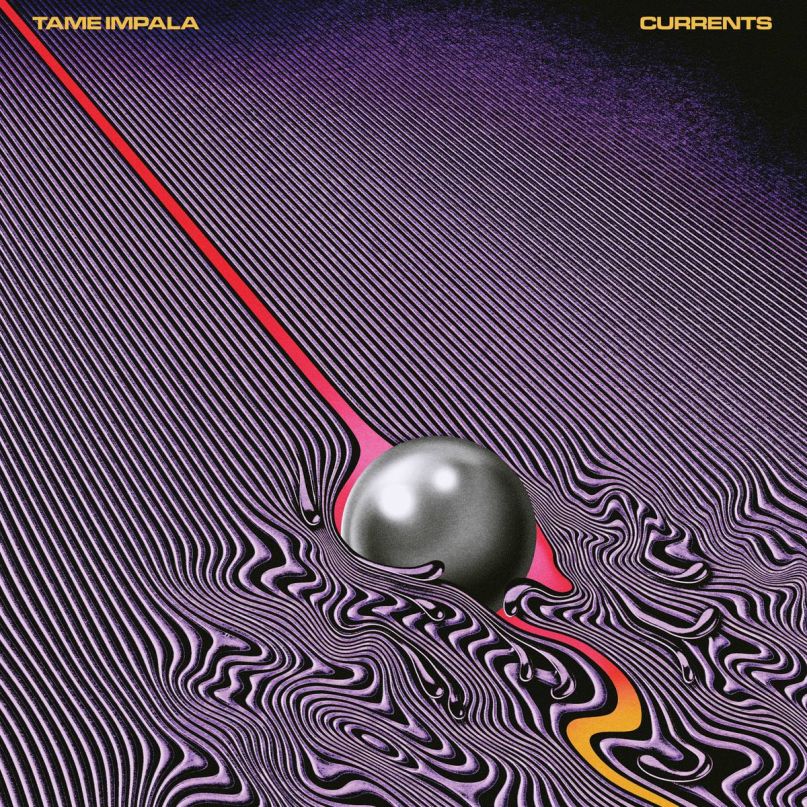 Lonerism set Tame Impala up to disappoint. The 2012 album garnered universal praise, launching Kevin Parker’s group into the upper tier of festival lineups and cultish fan followings. The Australian band was left with two routes: Rehash more psych rock, but face the blame of taking the easy route; or do something entirely new, but lose fans in the process. Parker isn’t one to turn down a challenge, especially when arranged by none other than himself, so he dropped “Let It Happen” and everyone scrambled. Tame Impala takes a conscious risk on Currents. To them, taking that risk is more fate than choice, and when the ambitious Currents pulls you into Parker’s mindset, the switch from guitars to synths makes perfect sense.

It’s fitting that “Let It Happen” opens the record. The dance jam is just shy of eight minutes, roping disco-tinged beats around basic guitars fed through crunchy pedals and cracking midway for a dizzying loop of electronic fade. It’s Parker’s most production-heavy piece, alternating between styles, volumes, and focus points, directly addressing change both sonically and lyrically. This was a long time coming. The last two years of Tame Impala’s live shows indicated a push towards electronics and repetition. By beginning with the clearest transition from past to present self, Currents sets itself up as a self-aware saunter into the downtown club.

The rest of the album comes at a significantly slower pace. “Nangs” fades in with a heavy plunge, drifting off with rewinds as if they’re tugging the record backwards at a DJ set. Reverberated handclaps echo throughout “Moment”, and “Yes I’m Changing” chugs along through crystallized synths. The songs begin to fade together. There is no real start and no real end. Throughout it all, the bass backs into a corner for two-step dancing, creating the ideal space for shy folk to emerge from the edges of the club. This is an album for Michael Jackson dance moves and Discovery-era Daft Punk. Still, Parker can’t fully escape his psych pop roots. Most of Currents‘ songs are dance music for closed eyes, opium over ecstasy, slow moves rather than sweaty motions.

It’s easy to call out Tame Impala for leaning back. In some ways, Currents sounds like Lonerism’s perpetually lazy older brother, more tame than impala. But the heavily effected guitars in “Eventually” punch with weighted force, and “Reality in Motion” rides the interplay between bass drum, shaker, and Jay “Gumby” Watson’s beautifully echoing synth. Even that takes second place to the irrefutably catchy “The Less I Know the Better” and its chunky bass. Things get velvety when Parker begins singing, hitting more falsettos than his usual John Lennon style taps into. Emotion tends to guide him more than the actual words he’s singing, and the result is a stream of ’70s funk and passionate delivery — the very thing that gives the record its deceptively lazy, long drawl.

Production has grown increasingly important in Tame Impala’s sound. Slow R&B influences and hip-hop skittering flow freely from their amps thanks to Parker’s precise, albeit nit-picky, tinkering. “Does it really fucking matter?” he calls out on “Love/Paranoia” before it drops to a shivering trap beat — two things that would never before scream “Tame Impala” before, yet they work. Parker straps the beat with angelic xylophone plinks, making a late-night anthem somehow psychedelic despite all its layered strings, pumped bass, and apologies to his “girl.”

Parker crafts a huge rap beat on “Past Life” to capture the shaky fuzz of blown-out speakers between finger snaps and cymbal ticks, yet he cuts it short, opting for campy voicemail love letters instead of finishing his groove. Meanwhile, “Disciples” rounds itself out in nearly half the time. Hesitation is any artist’s enemy, and that’s a weakness Parker is very well aware of. “Second guessing and hesitation and doubt are such inhibitors,” he said during his Reddit AMA, noting how Kanye West in particular inspires him in moments of self-doubt. Parker took the plunge on Currents, but his reservations in places like “Past Life” keep the album from realizing its fullest potential.

There’s a new world to play in on Currents, a fantastical vision that cranks up the saturation and weakens the laws of physics. Do we fault Tame Impala for changing? Do we chastise Parker for trying to be Prince? No — that’s just the fluctuation of life represented in sound. Tame Impala has departed to new territory, even through the seemingly basic, heady repetition of guitars and synths on “New Person, Same Old Mistakes”. Currents is all about the wide lens. It’s not the landscape worth falling in love with, but the way Parker gives us a tour. Let it happen, and it will carry you off somewhere much further away than you realized was worth visiting.

Essential Tracks: “Let It Happen”, “The Less I Know the Better”, and “Eventually”