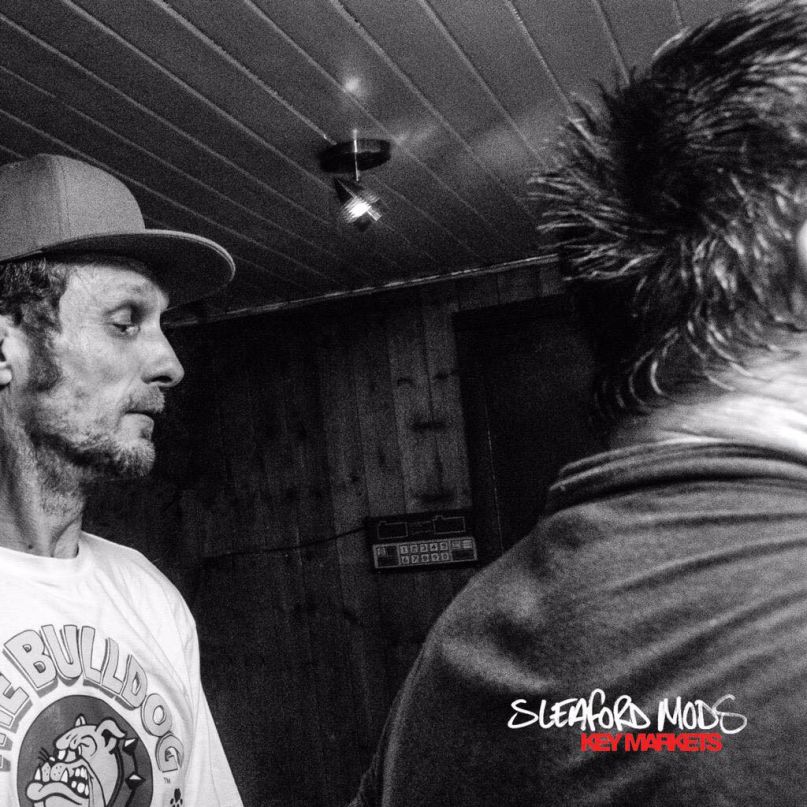 Key Markets, the latest album from Sleaford Mods, is an impressive show of force from a duo with the chemistry that comes from having worked together for years but none of the complacency. Combining elements of hip-hop, punk, and noise, the English duo specialize in irreverent, driving songs full of palpable anger, like a bastardized midpoint between The Fall and The Streets. Vocalist Jason Williamson alternates between barely in-tune singing and full-on shouting, while producer Andrew Fearn matches his intensity with sparse yet forceful backing music, providing just enough to fill the spaces in his partner’s polemics. The album doesn’t veer wildly from Austerity Dogs or Divide and Exit, but fleshes out Sleaford Mods’ sound in new ways.

While the duo have been making albums since 2007 at a prolific pace, it wasn’t until 2014’s Divide and Exit that they began to earn international acclaim. In the year since, the duo have recorded tracks with The Prodigy, played their first series of highly anticipated US performances, and were the subject of an article in the Guardian bemoaning the fact that they weren’t nominated for a Mercury Prize. Sleaford Mods are well past the point of being able to come out of nowhere and take the music world by storm, but they refuse to let the pressure affect their sound and style.

If anything, Key Markets contains some of the angriest, least accessible moments of their discography so far. From the dissonance that accents “Rupert Trousers” to the winding, Eastern melodies of “Arabia”, Key Markets undermines the notion that Sleaford Mods are only capable of mainlined aggression. Single “No One’s Bothered” holds a fuller, pulsating rhythm, sounding more like a traditional song without sacrificing the group’s energy.

A defining aspect of the project’s sound is the hyper-specificity to their lyrics. Not only is there a heavy use of regional vernacular, but there are also plenty of references to places and figures that may get lost in translation across the pond. While it helps to know who former Deputy Prime Minster Nick Clegg to get a better understanding of “Face to Faces”, you don’t need to be familiar with British politics to connect with lyrics like “Is it right to analyze in a general sense the capital machine, its workings and what they mean?/ Passive articles on political debate, its implications are fucking meaningless, mate.” In fact, between the recording and release of the track, many of its specific political targets were voted out of office. In a statement, Williamson insisted that it doesn’t lessen the relevance of the song, as the central target of the rich taking advantage of the poor hasn’t changed just because a few leaders lost their power.

By expounding upon the plights of people from, say, Nottingham or Grantham, Sleaford Mods are able to tap into something more resonant than vague platitudes levered against a faceless “man.” They are able to better capture that fiery sentiment by drilling down, which makes them, in turn, more relatable to people of the working class going through the same struggles across the world. On “In Quiet Streets”, over minimalist, driving, almost psychedelic instrumentation, Williamson exclaims, “The seizure isn’t actually a physical crack/ It’s your body trying to take itself back from rules.” Like the best punk singers, Williamson advocates reclamation of the self against the powers that seek to oppress, offering no reprieve for the targets of his many attacks.

Both in their 40s, Williamson and Fearn exude a certain world-weariness that only comes with having seen a lot of shit. While there’s a “sick of it all” cynicism throughout the album, it never takes away from the frantic energy on display. Sleaford Mods refused to make any concessions as they moved from relative obscurity to riding a wave of expectations leading up to Key Markets. By doubling down on their brand of frenzied political aggression, they show how consistency can co-exist with growth. Since there will probably never be a shortage of political grievances for Williamson to shout about, he and Fearn could continue this streak for years to come.