Cradle of Filth – Hammer of the Witches 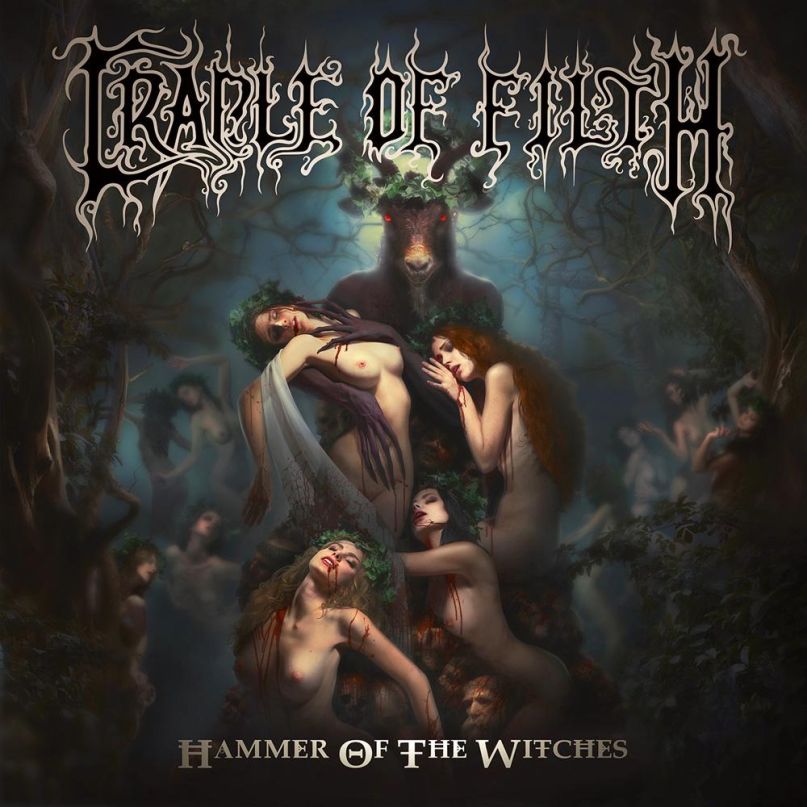 When guitarists Paul Allender and James McIlroy quit Cradle of Filth in 2014, they left a void in their wake. But this is a band that’s seen over half a dozen lineups since forming almost 25 years ago, and recovery was swift and productive. Guitarists Ashok (of Root) and Rich Shaw (of Emperor Chung) came on for live performances last year. Eventually, the newly assembled group, as led by founding member and lyricist Dani Filth, were ready to record a new album together. The result, Hammer of the Witches, is a promising start for what’s hopefully the final form of one of England’s best metal bands.

For a group of musicians that hasn’t been working together long, there’s a remarkable cohesion to the album. Ashok and Shaw work in tandem, crafting some of the catchiest and most melodious riffs in the band’s history. Keyboardist Lindsay Schoolcraft enchants as Filth’s Wiccan muse whenever the two sing opposite each other, and her synth work is essential in giving the album Cradle of Filth’s trademark gothic feel. Bassist Daniel Firth, now a permanent member of the band after being featured on 2012’s The Manticore and Other Horrors, is pleasantly confident with the spotlight he’s often given, and drummer Marthus shows expertise and brutal precision throughout. Filth leads them all valiantly with some of the most dynamic vocal work he’s ever done. His gravelly and rasping growls are often uprooted by the very next verse, screeching with impending vengeance.

With its name taken from the Malleus Maleficarum, a medieval document that details the persecution of those in league with the devil, Hammer of the Witches turns that very concept on its head by imagining retaliation instead. The album begins with an instrumental titled “Walpurgis Eve” after the Pagan folk holiday Walpurgisnacht, during which it is believed a grand meeting of witches convenes atop the highest peak in the Harz Mountains to welcome the coming spring. But in context of the story being told here, something much more malicious is afoot.

Hammer comes in as Cradle’s fifth concept album, following others inspired by the lives and indulgences of legendary and salacious villains. Where those albums focused on individuals, as Godspeed on the Devil’s Thunder succeeded wonderfully with presumed serial killer of children Gilles de Rais, Hammer of the Witches focuses rather loosely on what seems to be a coven seeking vengeance for humanity’s torturous ways against their kind and their mother Earth throughout the ages. “Deflowering the Maidenhead, Displeasuring the Goddess” forewarns of retribution from much greater natural powers with chants of “this judgment has come from on high,” to which Filth adds, “Poisoners choke on the smoke-ridden sty/ Forewarnings ignored, faith in a Lord/ Life’s blessings uncared for.” Mother Nature is pissed, and those who are truly devoted to her will bring about her violent vindication.

Any environmentalist messages, though, are deeply buried beneath layers of cobwebbed gothic lyricism. If Hammer bears any aspects of the Cradle of Filth from the past, it’s the strength and unchanging style of Filth’s guidance and songwriting. The band has called the album a “real return to the classic Cradle of yore,” and that’s mostly valid: Cradle has consistently seen a correlation between concept albums and good albums. Their best records have arguably been those that take a macabre tale from history and flesh it out in album format. 1998’s Cruelty of the Beast was their first foray into concept territory, romanticizing the story of Elizabeth Báthory, the Hungarian countess who murdered young women and bathed in their blood to preserve her youth, and it resulted in a fantastic work of symphonic black metal. Hammer, while dealing with more of an overarching theme and aesthetic, proves true in its dedication and quality. And this is all the more impressive with such a new version of the band. Filth’s vision is clearly still strong and allows his bandmates to flourish. Every member excels here, contributing to one of Cradle of Filth’s best and most fun records in almost a decade.

Essential Tracks: “Enshrined in Crematoria”, “Blackest Magick in Practice”, and “Right Wing of the Garden Triptych”