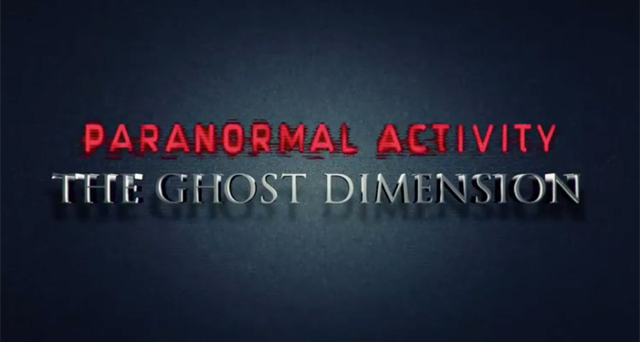 There are franchises that deserve multiple sequels, such as James Bond and Fast & Furious. Then there are those that (un)remarkably find their way into a half dozen installments that no one was really clamoring for, like Police Academy and Saw. The Paranormal Activity franchise falls into the latter category, with its upcoming sixth film being touted as the final one. Watch the trailer for Paranormal Activity: The Ghost Dimension below, once you’ve finished laughing at the film’s title.

This time the ghosts are reeeally pissed off. Or, something like that — who knows what’s going on with these movies anymore. If you find a bunch of old VHS tapes in your new house, throw them out immediately and call your realtor. Also maybe don’t become an amateur ghost hunter if you have children around. Like, send them to an aunt or get a hotel room for a few nights.

Unless this film ends with the implosion of our solar system, I’d bet my bottom dollar this isn’t actually the last we’ll hear of the Paranormal Activity franchise. Maybe this one does well and the studio reverses the kill order, maybe in 15 years we’ve run out of horror film ideas and some new Paranormal Activity doesn’t sound too bad. Whatever the case may be, I don’t expect this series to stay dead.

Paranormal Activity: The Ghost Dimension will bring back Katie Featherston, who starred in the first installment and subsequently appeared in every sequel. The film also stars Chris J. Murray, Brit Shaw, and Ivy George. PA:TGD is directed by Gregory Plotkin, who edited the first five films in the series. The film hits theaters October 23rd.