What has Hollywood been missing? Naked space vampires! 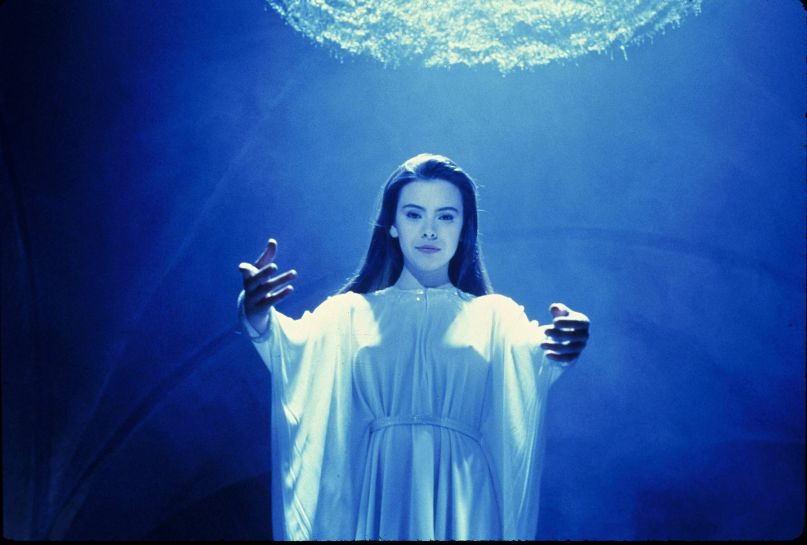 Welcome to Remake This!, a series where we look at past movies and not only propose they be remade but suggest how to remake them. Whether a movie tanked, had a good concept hidden within a weak film, or we just want to give something another chance, Remake This! is a cinematic “What If?” wish list. Our last installment argued for a new take on The Punisher (before Netflix ruined it), and this time, we dig into Tobe Hooper’s filmography for the right kind of remake.

Last month, Tobe Hooper’s work was rummaged for the second time. Fox and MGM and Sam Raimi remade Poltergeist, and oh boy, what a snooze. At the risk of sounding like some drunken rant, the original was perfect the way it was! Hooper played nice for the studios, while Steven Spielberg ghosted the whole thing as a writer and uncredited director, likely sneaking in all those familial tropes and ILM-infused awes and wonders. And yet, Hooper managed to slay audiences with his visceral scare tactics. What about that moment when the giant skull comes out of the closet and screams at Coach Hayden Fox? The cameraman with the literal face-melter? Poor little Carol Ann?

Poltergeist is a movie that absolutely should not have been remade, for a lot of reasons. It was a nifty family thriller that made its way into the horror canon with its catchphrases, innovative effects, and extremity. It’s singular. Just look at the sequels and their naïve dependence on effects, and only that, as a means of topping the original.

Poltergeist took the well-worn concept of haunted houses and updated it for the nuclear family in the suburban ‘80s. So what did Raimi and his hired gun Gil Kenan (of the far superior haunted house flick Monster House) come up with? They used the exact same structure, but with iPads! GPS! HDTVs! They’re the modern home of horror, people! Digital distractions are our new nightmares! Okay, there’s a point to be made there, but the remake couldn’t be bothered to do much with that prescient theme. Raimi literalized what we had to freak out over-imagining in the original, with the exception of one nightmare-inducing power drill scare.

It got me thinking. Tobe Hooper is no stranger to remakes. His blunt horror beauty The Texas Chainsaw Massacre was remade into a slick Michael Bay production from the director of various Sega commercials, and the onetime emphasis on shocks gave way to excessive gore. Sign of the stupid, stupid times, I suppose.

But they taught us a valuable lesson about remakes: stop remaking the brand-name hits that everybody already likes, if not loves. Texas Chainsaw and Poltergeist are jewels in Hooper’s odd crown, and their remakes exist solely to cash in on the property, not out of a sense of respect, one-upsmanship, or even love. No, it’s just business. Even Hooper knew better. His Invaders from Mars remake in 1986 may have been forgotten, but he knew that if you’re going to take an original idea, do it your way and do it up. He raised the stakes with insane 1980’s practical effects. It’s something! Hooper vaporized Bud Cort!

But curiously enough, Hooper knew what was worth remaking: trashy originals. And ironically enough, Hooper’s filmography is splattered with ‘em. He was behind The Funhouse, Eaten Alive, and even Venom, a movie about a killer snake from which he was removed. They’d all make for awesome redos. But one film, one spectacularly trashy and expensive Cannon production, would make for a brilliant remake. And it just happens to be celebrating its 30th anniversary this week.

You guys ever see Lifeforce?

Oh, it’s terrible! Yet, it’s a blast! It’s a terriblast! Tobe Hooper’s trashy Cannon production is a bloody, booby, bizarre sci-fi thriller about space vampires. Naked space vampires, to be exact. They don’t necessarily suck blood, but instead, Lifeforce. It should absolutely be remade.

Based on Colin Wilson’s beautifully titled 1976 novel The Space Vampires, it’s the story of a manned space expedition to a derelict craft with deadly cargo. (Oh, like Alien? Quiet!) The Space Vampires features a spaceship with exactly that. Space vampires. Seemingly long-dead bat monsters that astronauts discover. But in addition to that, the team discovers three perfectly preserved, seemingly human bodies. So, naturally, and maybe for science (?) the astronauts rip those humanoids right out of the ship, bring them to Earth, and damned near destroy humanity because, again, space vampires.

The book is a 21st century story, with pseudo-spiritualism and a reflective attitude regarding its “deadly kiss” story. Hooper’s Lifeforce is louder and far more abrasive than the novel. Lifeforce is set in modern-day 1986, features Haley’s Comet as a plot device, and revolves around an international chase to recapture the naked lady space vampire.

Writing these things make me feel like a guffawing teen, but it’s a legitimate B-movie for the ‘80s, a treasure trove of bad effects of the era. Hooper went to town with gore and eroticism and shocked-looking actors. The original cut was something like 130 minutes, but Tristar cut the crap (extreme violence and tawdry nakedness) down to an 118-minute film for the US. Despite a then-ample budget ($25 million), the thing looks terrible today. The Henry Mancini theme, while catchy, is a laughably overblown space war trumpet theme. The leading lady and galactic vampire (Mathilda May) is naked for roughly half the movie, and it elicits feelings of shame and shock and well, bafflement. And speaking of May, that sexy space vampire is vomited by Captain Picard himself, Patrick Stewart, as a stream of blood that forms into a human body, and it looks over-edited into oblivion: quick effect shot, another quick effect shot, and then many terrified reaction faces. Lifeforce repeats this often, whether with light effects or rubber monsters.

It’s junk for sure, but as a concept, it kind of holds up. A question: when is something called “Space Vampires” ever unfashionable? It’s an objectively dopey idea that’s sellable on the name alone. It would make for an exceptionally unhinged European horror film about the terrors of outer space that could work off tropes in an absurdist way. But it needs to be made with lasting qualities, like focused effects, but without a total dependence on them. We might be in the age of metatext, but wouldn’t Lifeforce make for a comically scary farce if done right?

Hooper was most certainly directing Lifeforce with genre nerve and his standard intensity, but with a dead straight face as well. That last part is the problem. There’s a world-decimating final invasion and viciously violent attacks, but nobody ever stops to say, “Space vampires?!”

And why not just go with the original novel’s title? Lifeforce stinks of something that thinks it’s better than it is. This movie is primed for cheap seat, lowest-brow viewing. Lifeforce remade would jockey for position as a great work of trash art if it taps into its Coliseum complex and just goes bonkers. Hooper took the original book and got it halfway there, and now is the time for a fresh and insane effects horror film. No false pretenses would be a blessing for this remake. Just do it big, and be upfront about it.

The taglines alone on a remake are a marketer’s dream.

“They’ve traveled millions of miles to Earth, and they’re just looking for a blood bank.”

Remake Lifeforce not as screwball, parody, or straight horror, but as a gonzo effects spectacle. Make it an outlandish schlock film, with camp and creepiness to spare. Dan O’Bannon, who co-wrote Lifeforce, more or less figured out the formula with his creepy, funny Return of the Living Dead in 1985. So remake Lifeforce like that! Make a film about idiots in space that come across vampires and do dumb things! Like Prometheus, but self-aware!

It would be more fun than another PG-13 horror remake with no teeth or thrills. Sorry, Poltergeist.

What’s Drew Goddard up to? Is he still in all sorts of development hells with comic properties?

With The Cabin in the Woods, he proved himself as the closest thing we’ve had in recent years to a legitimate cross-genre auteur who can specialize in the humorous and scary. His debut, while admittedly all over the place, had the wit and will to try a lot of things, and he came out with a cult classic for better or worse. He could make a modern movie called The Space Vampires in a way that might actually be watchable, or better yet, enjoyable.

If he’s not around, what about that guy Fede Alvarez? His Evil Dead remake made me queasy, and he wasn’t afraid to mess around in the remake arena.

The cast is kind of immaterial. We’re talking about visual effects, and um, naked vampire people casually trouncing around Europe. There should be many crazed, naked space vampires in the Lifeforce remake. But if the production goes for Penthouse pets, it’ll look sexist, or T&A-prone, so here’s how you do it. Remember that up-the-ante idea about remakes?

Brag about the record set for the most naked people in a single film in the press kits! Make it freaky and so over-the-top it’ll be beyond comprehension (and criticism). Think of the witches’ coven in Polanksi’s Macbeth. It would easily be the wildest thing on screen of late and the film’s hard-R calling card.

No, I am not Bob Guccione.

WHO ELSE SHOULD WORK ON THIS?

Maybe this is a sentimental wish, but did you hear that Rick Baker is retiring from make-up in movies? What if this remake could be his farewell magnum opus? Could you imagine his rubbery, bloody space creatures made on an unlimited budget?

Or better yet, Rob Bottin! Remember his work on The Thing and The Howling and other great effects films with unsightly body horrors? Where’d he go? IMDB says one episode of Game of Thrones recently?

We have to get these two together. For The Space Vampires!