Plus, watch another one of his fans rap over "m.A.A.d city" at Sweetlife Festival this past weekend 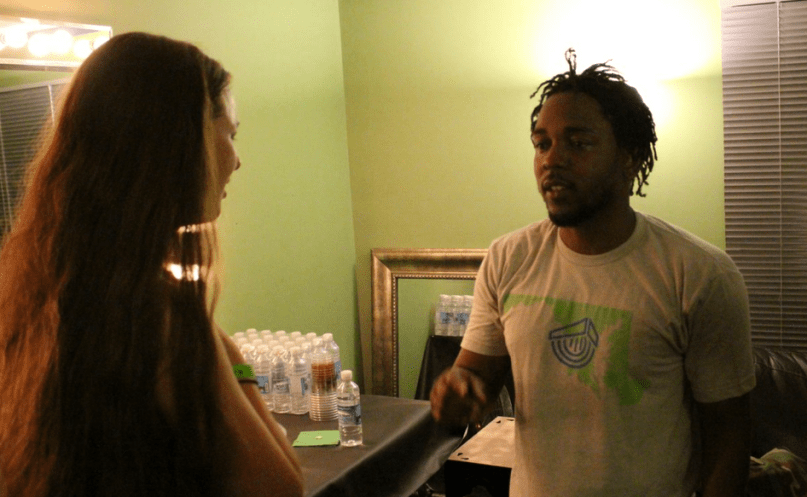 Kendrick Lamar has said that his masterful new album, To Pimp A Butterfly, served as a form of self-therapy when he was struggling with depression. The Compton MC’s also expressed hope that his music can be a powerful force for his fans in much the same way.

“How can I use it [my leadership]? For better or for worse?” he said in April shortly after TPAB’s release. “Money or celebrity, how can I use it? How can I pimp it? Can I pimp it negatively, or can I pimp it in a positive way? Positive for me is showing what I go through, what I’ve been through … but that I still love myself at the end of the day.”

Turns out that K-Dot’s words have touched someone in a very positive way. During his set at this past weekend’s Sweetlife Festival, Kendrick met a fan who says she was saved by his music. “I’m at the end of the show, and I see this young lady crying, and I’m thinking, She must be really going through something right now,” he explained to MTV News.

“Then I start hearing her murmur with her lips, ‘You saved my life.’ So I’m like, Damn. This is serious. This is not for play, why she’s out here right now,” Kendrick continued. “Then she said, ’I was gonna kill myself last year.’ So I said, at that point, I gotta bring her up onstage and show her some love and let her know this is real.” The 16-year-old, identified only as Claire, was then brought on-stage where the two shared an emotional hug.

“When I was 15, I was diagnosed with severe depression, and Kendrick got me through it,” Claire later told MTV. “And I couldn’t have done it without him. I listened to his music over and over and there were nights where I thought I was going to end it all, and I didn’t, and I think that’s because his words impacted me in a way that no other artist has ever done. I can’t thank him enough. I can’t thank the people behind him enough for making him come to the earbuds that I listen to. I feel inseparable from his music.”

Claire and Kendrick, who was recently presented with the Generational Icon award for being an exemplary role model, then spoke backstage after his set to speak on a more personal level. “[I wanted to] bring her backstage and let her tell her story. Let her know, it’s more than just me bringing you onstage — I actually feel you. Because that’s why I do my music. And every time I see something like that, it reminds me why I do what I do.”

For the full story, along with pictures of both Kendrick and Claire, head to MTV.

Also during the set, the “King Kunta” MC invited a fan to join him on-stage to rap over good kid, m.A.A.d city track “m.A.A.d city”. Check out the footage below.