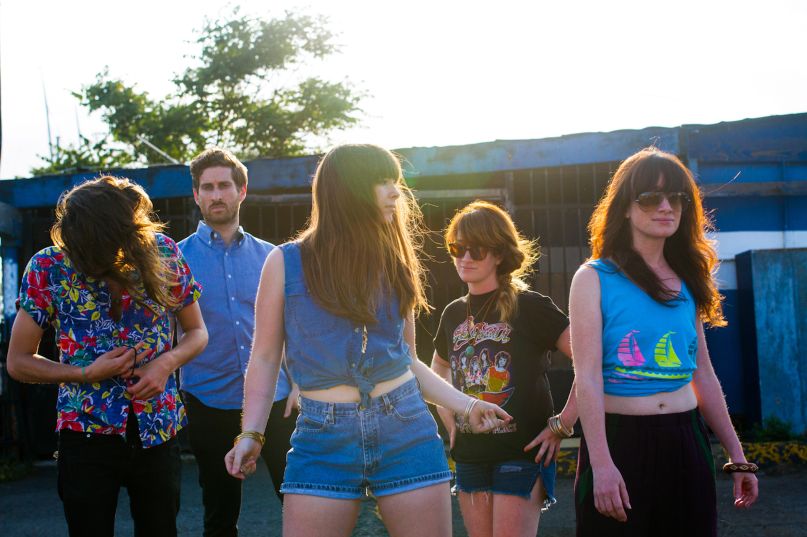 There’s often an indescribable energy that exists between siblings. Sometimes it vents itself out in the form of wrestling in the living room and stealing each other’s Pokémon cards. Other times it manifests into a Carter Family scenario, where familial traits merge into a unique and expressive creative outlet. New York indie rock outfit Hey Anna leans more toward the latter, but keeps that don’t-tell-mom-or-I’ll-kill-you tenacity in their music.

Formed by the three Rauch-Sasseen sisters alongside drummer Matthew Langner and guitarist Jamie DiTringo, the quintet have two EPs to their name and are now readying their full-length debut. Run Koko is due out on July 7th and is inspired by sisters’ coastal upbringing. Their latest single, the self-aware “Don’t Talk Stop”, comments on the way in which society makes us view nostalgia.

“It’s about the pageantry of modern times and the struggle to seek the whole truth within a society that packages nostalgia as the antidote to contemporary disenchantment — a universal call to defy that world for a prismatic dream-reality we create for ourselves,” bassist Katie Rauch-Sasseen tells Consequence of Sound. “What can we be absolutely sure of but own dizzying experience and emotions?….and in the end, can we even be sure of them? Does anything make sense?”

Existentialism aside, the track highlights Hey Anna’s tasteful blending of heavy guitars with whimsical vocal melodies. The three sisters complement one another effortlessly, singing around the lead line with harmonies and swirling call-and-responses. The chugging guitars feel like the relentless push and pull of the ocean, as well as the tug-of-war between past/present and dream/reality. Listen in below.