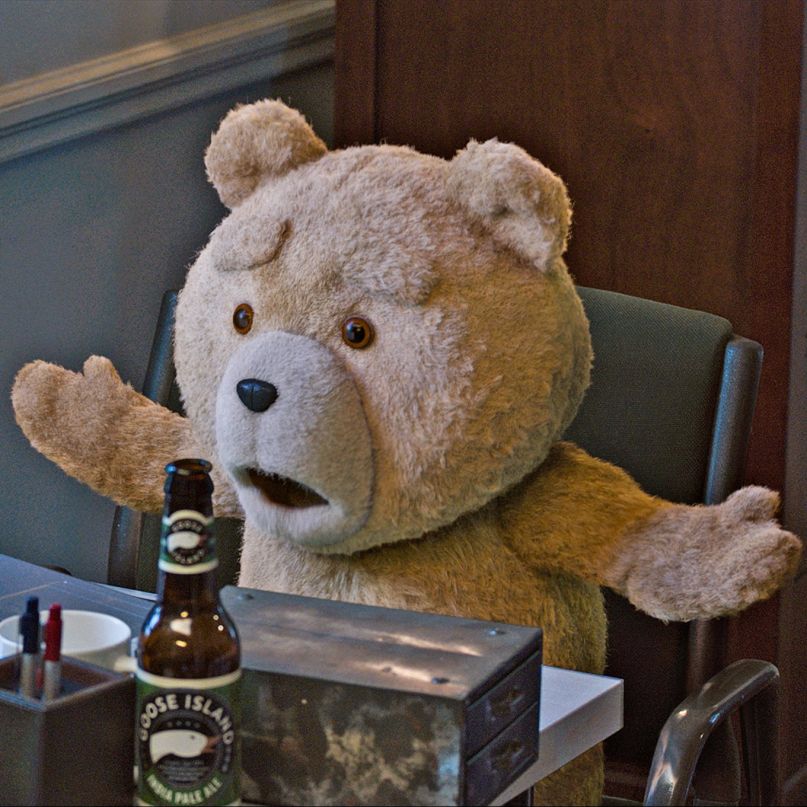 Lost amid the fervor surrounding Seth MacFarlane’s ill-fated trip to the Oscars and iller-fated trip out West is the truth that his directorial debut, Ted, really wasn’t half bad. The surprise smash hit highlighted MacFarlane’s best and worst attributes as a creative force in one overlong but frequently gut-busting film. Its sequel, Ted 2, improves on both of MacFarlane’s previous feature-length directorial outings, and even some of his more vicious habits as a writer. Sure, the pleasures of Ted 2 are heavily predicated on one’s tolerance for the outrageous behavior of a pair of Bostonian delinquents and/or a relentless stream of absolute filth, but if neither of these things are a barrier to entry, then let’s put it more simply: Ted 2 is often funnier than hell.

After the first film’s seeming happily-ever after, Ted (MacFarlane, doing a much better job of distinguishing him from Peter Griffin this time around) has married his beloved Tami-Lynn (Jessica Barth), but barely a year later Ted’s cranking numbers in a sweaty kitchen and hollering back and forth with his new bride about finances/their marriage/everything. His best friend John (Mark Wahlberg) got divorced from Mila Kunis’ stuffy girlfriend sometime offscreen between the two films; that MacFarlane simply writes Kunis out instead of turning her into the punching bag she’s been on Family Guy for many years feels like a small miracle. They’re both struggling, until Ted decides to do what every responsible adult does when their relationship is on the rocks: have a baby.

Except Ted can’t. Setting aside the whole “he’s a plush bear with no sex appendages” situation, there’s also the matter of both Tami-Lynn’s infertility and the revelation, upon attempting to adopt, that Ted isn’t actually considered a person, or able to enjoy any of the rights granted to one. From there Ted 2 picks up stories at a rapid pace: Ted’s attempt to legally prove his personhood, John’s flirtations with Sam (Amanda Seyfried), the pro bono lawyer assigned to their case, Ted and John’s ongoing bromance, and the Hasbro executive (John Carroll Lynch) who wants to abduct Ted, now legally considered “property” by the state, to figure out exactly what brought him to life and manufacture it for the masses.

For a director who’s often shown a bit of an unsure hand where pacing is concerned, here MacFarlane manages to keep the jokes coming and the story fleet-footed. It’s every bit as digressive and conversational as any of his work; some of the film’s best bits emerge from Seyfried, Wahlberg, and MacFarlane riffing off one another while sitting around in a living room. There’s even a bit more gloss on the production; a library montage/Breakfast Club homage has charm and appeal and a few eye-catching visuals to spare, the Ted animation moves even closer to seamlessness, and the elaborate dance number that opens the film is MacFarlane in a nutshell. It’s at once joyous, dryly sarcastic, a little bit too long-winded, and a total fetishization of all things Old Hollywood.

But even though the film’s structural sensibilities may harken back to the hyper-wordy screwball comedies of old, Ted 2 is decidedly modern in its brazen punchlines. As the film moves from Ted’s initial struggles with artificial insemination to the court case to an eventual cross-country journey (featuring a stop on a middle-of-nowhere farm that yields a phenomenal use of John Williams’ main theme from Jurassic Park), the film improves on its predecessor by focusing on that film’s strongest attributes: the stoner-literate rapport between Ted and John. At this point, either MacFarlane’s reference-heavy, digressive comedy either works for audiences or doesn’t to a certain point, but Wahlberg and MacFarlane have an undeniable chemistry that makes even some of the film’s more tired gags (a sequence involving a trip to a sperm bank makes explicit what was already once done offscreen in a Family Guy bit) pop out.

While Tami-Lynn is actually a character and not just a punchline this time around, the real meat of Ted 2, even beyond the Mr. Smith Goes To Washington-gone-wild premise, is found in the relationships formed between the film’s core trio. While Seyfried’s Sam is very much the “cool girl,” there’s still a lot more life to her than the shrewish, controlling girlfriend tropes found in the first installment. MacFarlane’s screenplay (co-written with regular collaborators Alec Sulkin and Wellesley Wild) allows for the three to rotate the responsibilities of straight man and foil, which leads to a number of great bits, particularly a runner involving Seyfried’s lack of pop cultural literacy that stays on the right side of the line between goofy and patronizing. She’s a natural fit for the laid-back, conversational tone much of the movie takes.

Ted 2, when it stumbles, does so less because of its game cast than because of another hallmark of its director’s approach: a general lack of handle on the desired tone, leading to the employment of a great many of them. The film takes some surprisingly somber turns, particularly in its third act, when the inevitable burst of over-the-top action turns dark. Likewise, the allegories about personhood offered up in between jokes aim to impart some sort of larger lesson about the fluid nature of what it is to be human, but are pretty unconvincing when book-ended by jokes concerning a penis-shaped bong. Whenever the film has to slow down from its volley of gags and one-liners, it’s a lot less convincing; frequently, the plot feels like a chore the cast is forced to undertake until the next burst of laughs comes along.

But in all, the film works, not only because of the laughs on hand, but because the odd streak of sweetness that characterized the first film and even some of MacFarlane’s (much) earlier TV work settles in here, and the relationships between Ted and his human companions feel genuine enough that the sentiment feels earned, rather than shoehorned in. Like its hard-living protagonists, Ted 2 is an acquired taste, the kind of thing that’ll either pull you in with manic camaraderie or push you away with its gleefully poor tastes. Sometimes, though, you just need to guffaw, and Ted 2 is consistently good for that.