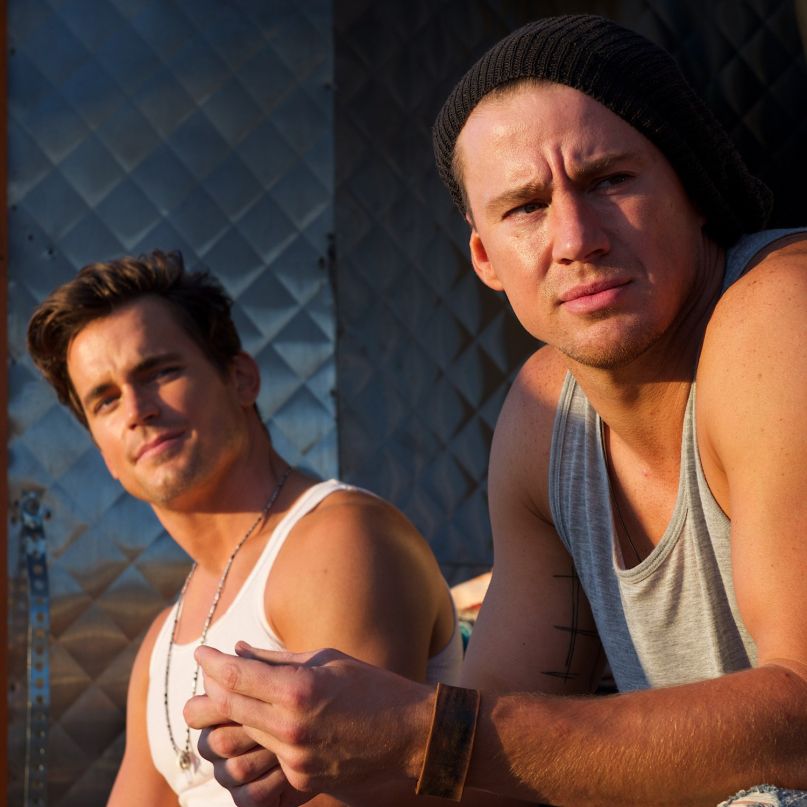 Curse his meathead charms! Okay, Channing Tatum may don bro-ish necklaces and backward caps, and he might be incapable of spelling “Adonis” or “unpretentious,” and he could very well be limited in the kinds of roles he can take (C-Tate’s King Lear? No way). Yet, his fancy dancing skills, mixed with his complete and total lack of shame — no, total self-confidence — easily makes him one of our most relaxed and affable modern movie stars. And Magic Mike XXL might be Tatum’s greatest show of muscle yet.

Magic Mike XXL embodies its label. In the spirit of Donald O’Connor just makin’ ‘em laugh, this film wants to give ‘em more, and then even more. It’s an outrageous, frivolous, overblown gathering of himbo strippers just looking for a good time. Whereas Steven Soderbergh’s original film was a terrifically weird working man sizzle reel in the vein of Flashdance or Saturday Night Fever, XXL is completely comfortable just hunkin’ it up and playing to its (very obvious) audience. Mike just wants those dollar bills, y’all, and he won’t stop until everybody laughs, smiles, and has a fun time.

And when you gaze long into the Tatum, the Tatum also gazes back. Gazing with his piercing blue eyes, hearty arms and pecs, and sharp yet undulating mid-section … man, how do you do that? A spiel about weak dialogue, aversion to plot, and commercial pandering was being prepared for this review, but those thoughts seem to evade me now. Dude, Tatum just half-assed a stripper musical and it was nuts and bananas! These strippers dance their bronzed butts off in what could only be described as some of the finest action sequences of this year. That’s amazing! Magic Mike XXL’s not very deep, no, but at least the film is ready for show time, and Mike’s all about that center stage.

Set a few years after the first, XXL sees Mike Lane (Tatum, obviously) finally having made that break from being a “male entertainer.” He’s now making custom furniture in Tampa — a hard, not too fun, nowhere-near-as-satisfying-as-Mike-imagined kind of life. When the old gang calls with devastating news that his former promoter Dallas (Matthew McConaughey) has died, Mike is ready for a visit to see his old stripper pals. Okay, they lied. Yeah, Tarzan (Kevin Nash), Big Dick Richie (Joe Manganiello), Ken (Matt Bomer), and Tito (Adam Rodriguez) just made that up to get Mike out for a party. Not cool, bros. The four of them are on their way to Myrtle Beach for a wild-and-crazy male stripper convention, known as “The 2015 Annual Stripper Convention.” Mike resists, assuring the boys he’s on the straight and narrow.

Yet all it takes is one fateful night, as a Spotify ‘90s R&B classics network shuffles out My Pony while Mike’s working hard in his garage, and pow, he’s back. Mike grinds his table. He uses a power drill for the euphemism it is. He even breaks the fourth wall with a cheeky little “oh no” face to the camera. It’s a feat of choreographed physicality that will probably elicit both howls and snickers, and Tatum’s full-body grind works either way. From there, Mike hops aboard with the boys on an ice cream truck for what could only be described an escalating series of dares, tests of masculinity, and, frankly, boneability in the name of a road musical.

Ritchie nails the shrugging-dude mantra of the whole film; when Mike asks him if the trip is a good idea, Ritchie casually assures him, “This is a terrible idea. But you can’t take it back now.” Magic Mike XXL, for the most part, falls into every single situation, like hanging with a loveable galoot. Drag shows, beach parties, convenience mart performances. In one scene there’s a mansion filled with a variety of naked black entertainers. In another, a mansion filled with what could only be described as the Georgian mayors of Cougar Town. And the gang rocks them all, what with their low-brow charm and their giddy dancing. Tatum, a former stripper himself, is clearly playing to his strengths. It’s a bummer to see the story give up on the earnest ambitions of the original, and it exchanges all that working-man stuff for a sort of spring break flick on whey, but that’s Magic Mike XXL’s thing. Be honest. We just wanted the dancing, and for Tatum to bring the goods.

One last thing: without ruining the ending, the last act of Magic Mike XXL, is such a force of kinetic choreography, goofy staging, committed music selection, and all-around joie de vivre that you’ll be hard-pressed to find a more entertaining mainstream movie moment this year. What exactly happens? Pay the cover, and Tatum would love to show you.