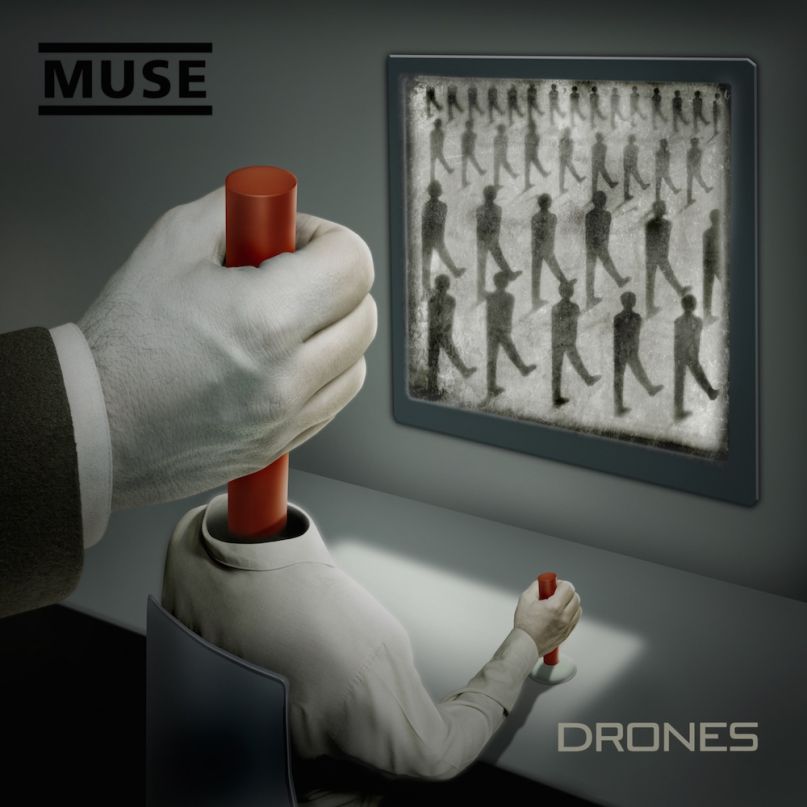 The general agreement among Muse faithful, a particularly fervent (and particularly British) subset of rock fans, is that Matthew Bellamy and co. own the greatest live concert experience of the 21st century. A simple mention of Glastonbury ‘04, Wembley Stadium ‘07, or any number of bootlegged gigs is all you’ll need to send them into fits of prog-inspired rapture. But don’t take the fans’ word for it — judging from the two live albums they released within a five-year span (2008’s HAARP and 2013’s Live at Rome Olympic Stadium), Muse also seems to know that the stage is where their theatrical brand of stadium rock finds its readiest soapbox. Albums are almost a secondary concern, their chief purpose being to generate some fresh reinforcements to add to the band’s monolithic live show.

It feels almost unfair to judge a band like Muse on the quality of their studio albums, especially in an era when the traditional album format is looking increasingly like an artifact from some ancient, analog time. When John Lennon declared The Beatles bigger than Jesus, he was referring not to a religious experience but to a feeling of total ubiquity, which no single band or performer can hope to achieve in today’s Balkanized cultural landscape. Bellamy has never called himself bigger than Jesus, but witnessing his heroic rock god act is as close to church as a lot of folks will get. That’s really the best a band can do in 2015: Make ‘em sweat, make ‘em sing along, make ‘em believe in something bigger than themselves, then send ‘em home with a smile and a $60 hoodie.

Early signs hinted that Drones, Muse’s seventh studio album, would aim to capture the boundless energy of the band’s live show. “It’s gonna get heavy,” Bellamy promised on a Twitter Q&A in July 2014; that was welcome news to anyone who bemoaned The 2nd Law’s tendency to whiz, bang, and dubstep its head straight up its own ass. The most promising development came when Muse dropped “Psycho”, a bluesy banger that’s likely to induce déjà vu for Wembley concertgoers. Of course, “Psycho” also came with its share of warning signs. That audio sample of a drill sergeant berating his recruit with lines like “Are you a human drone?” and “Show me your war face!”? So cutting, man. And let’s not even get started on Bellamy’s own lyrics, which feature some of the most hamfisted political commentary this side of Warped Tour.

Lyrics have always been a chink in the almighty Muse’s armor, and that chink has grown into a full-on crisis on Drones. Try as he might to obscure them with his flexible tenor, there’s no hiding the undiluted awfulness of lines like “On the outside I’m the greatest guy/ But now I’m dead inside.” Bellamy may play guitar like a cross between Tom Morello, Jonny Greenwood, and the flame-throwing Doof Warrior from Mad Max, but he writes like a disaffected high-schooler who just read 1984 and won’t shut up about it. (Dude was once a 9/11 truther, for what that’s worth.) This problem is felt more acutely on Drones than anywhere else in Muse’s catalog, if only because the album adheres so rigidly to its chosen theme: an all-out attack on militarization, political brainwashing, and other unfortunate byproducts of “the system.” The most concrete image we get is that of the actual drones, whose hovering bodies appear in some form or another on nearly all of the album’s songs. By the time closer “Drones” rolls around, the very word feels more oppressive than the actual surveillance state. All of this is not to say that these are unimportant themes; only that a British prog-metal band that writes theme songs for the Olympics should probably reconsider what it is they do best.

What Muse does best, of course, is crank the bombast to 11 and let their supercharged musical ambitions take it from there. Thankfully, there’s plenty of that on Drones, an album whose sonic ambitions keep things interesting despite the failed concept. “Dead Inside” is a bit silly with its robot voices and dubstep-inspired percussion, but it’s also commendable for its cross-genre playfulness. Listening to this song and this album, it’s almost incredible to think that Muse was once dismissed as a light-beer version of Radiohead. More than 20 years into their career, what they really sound like is a Frankensteined patchwork of, say, a dozen seminal British rock bands. There’s the pummelling synthpop of Depeche Mode on “Dead Inside”, which bears more than a passing resemblance to “Personal Jesus”. Elsewhere, there’s the overblown theatrics of Queen (“Revolt”, “The Globalist”)”, the dirty riffage of Black Sabbath (“The Handler”), and the bluesy heavy metal of Led Zeppelin and Deep Purple (“Psycho”, “Reapers”), all executed with a rhinestone-studded swagger reminiscent of Bowie and T. Rex.

For better or for worse, the band Muse most resembles on Drones is a latter-day U2, whom they supported on the 360° Tour in 2009 and 2011. “Mercy” is the kind of middlebrow anthem Bono has been farting out for years now, its supposedly trenchant political commentary negated by its almost palpable yearning to be played on commercial rock radio. Like “Revolt”, it’s a catchy, occasionally rousing song with a couple of neat tricks up its sleeve, but a convincing call to action it is not. It makes one wonder what Drones might have been if Bellamy was just a teensy bit more aware of his own band’s ethos. He writes about rising above oppression in the voice of the Everyman, not seeming to grasp that Muse’s entire appeal lies in the unchecked excesses and ambitions of the Übermensch. There’s something transcendent about Muse when they’re firing on all cylinders — something that’s designed to lift the listener out of the muck of life and launch them into outer space. Drones stumbles when it strays from Muse’s self-created universe and tries to be topical; it’s like watching Superman stuck in the guise of a floundering (albeit well-intentioned) Clark Kent.

Still, flashes of that blue spandex suit poke through enough to make this album a decent addition to Muse’s catalog. It will be nice to see some of these songs emancipated from their rigid context and incorporated into the band’s live show, when nobody will really care what Bellamy’s falsettoing about so long as he delivers the sound and the spectacle. And maybe the jaded adult in me is being a bit harsh on Muse’s political aspirations. What they lack in nuance they make up for in enthusiasm, and that’s probably exactly what a 15-year-old kid needs to start giving a shit about the world around him. There’s something to be said for the band that acts as gateway drug, especially when that drug feels like MDMA when taken as directed: inside a stadium filled with thousands of screaming fans.

Essential Tracks: “Dead Inside”, “Psycho”, and “The Globalist”