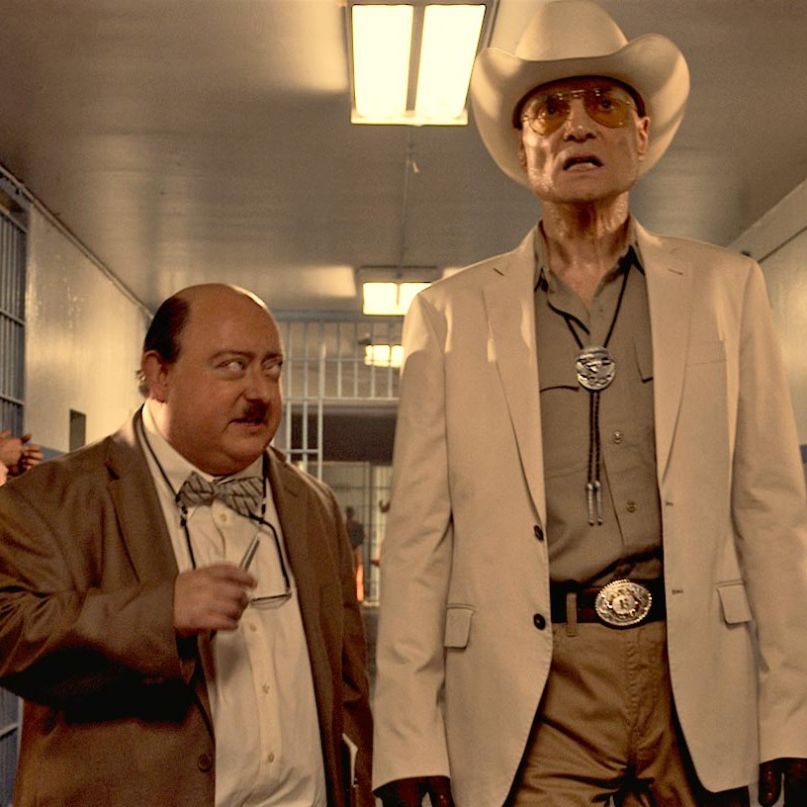 One of the few strengths of The Human Centipede franchise has been writer/director Tom Six’s willingness to experiment with genre. The first installment was a competently made body horror film, part two was full-on exploitation, and with part three, we get an unabashed satire.

Just look at the plot details. Dieter Laser plays Bill Boss, the warden of George H.W. Bush Prison, a maximum-security joint suffering from a punishing desert heatwave and severe overcrowding. Boss’ increasingly sadistic methods of torture (fractured limbs, boiling hot waterboarding, then castration) aren’t enough to deter his inmates from misbehaving, so he eventually takes the advice of his accountant (and fan of the first two Human Centipede films), Dwight (Laurence R. Harvey), and has the prisoners sewn anus-to-mouth in a giant 500-person chain. Besides freeing up space in the prison, the punishment will hopefully scare would-be criminals across America from ever committing a crime.

To its credit, Final Sequence has a lot of comedic potential. For one, the script posits that the first two films exist only as films (like part two, it opens with Harvey watching some of Six’s footage), with each of their respective villains once again playing the lead roles here. Six even pops up as himself at one point to give Bill and Dwight his blessing for using his idea. All of these metafictional devices point to a thesis that, for all their grossness, the Human Centipede movies are just movies — nothing more. Anyone who gets offended by their ludicrous plots, as so many people have, may be taking themselves too seriously.

The problem? The shit (both metaphorical and literal) just isn’t funny, although it certainly could be. In the right hands, Final Sequence could be a seriously twisted take on Hogan’s Heroes. You’ve got the fascist (and German) prison overlord, his portly (and mustachioed) right-hand man, and even the buxom blonde secretary (Bree Olson). Harvey and Olson both have a grasp on the speed and mugging required to mine the darkest of laughs from such a cruel scenario, but Laser — so magnetic as Dr. Josef Heiter in the first film — never finds the right balance of pace, stoicism, and mania to make Bill Boss even remotely watchable. Instead, he screams every line with a slow awkwardness that would put Tommy Wiseau to shame, never chewing up the scenery as much as rolling it around in his mouth until it’s cold and flavorless.

In addition to its sluggish failure at comedy, Final Sequence doesn’t even work as a gore fest. Love ’em or hate ’em, the first two films at least succeeded as torture porn (if that’s your thing), but the third doesn’t get to the centipede business until the last 15 minutes of its 102-minute runtime. That’s because, for some reason, Bill Boss disregards Dwight’s suggestions of creating the eponymous nightmare creature for the first three-fourths of the story. But why? Boss is exaggeratedly sadistic from the get-go — sexually abusing Daisy, keeping a jar of dried African clitorises on his desk as snacks, and constantly abusing his prisoners with the aforementioned punishments. Why does he need convincing to subject them to more torture and coprophagia?

Even when we do get to that money shot from the poster, we don’t see much else. A doctor creates the centipede, Bill Boss shows it to Six and the visiting Governor Hughes (Eric Roberts), everyone reacts to it in predictable ways, and that’s about it. Human Centipede 3 isn’t offensive because it’s shocking — it’s offensive because it’s boring.