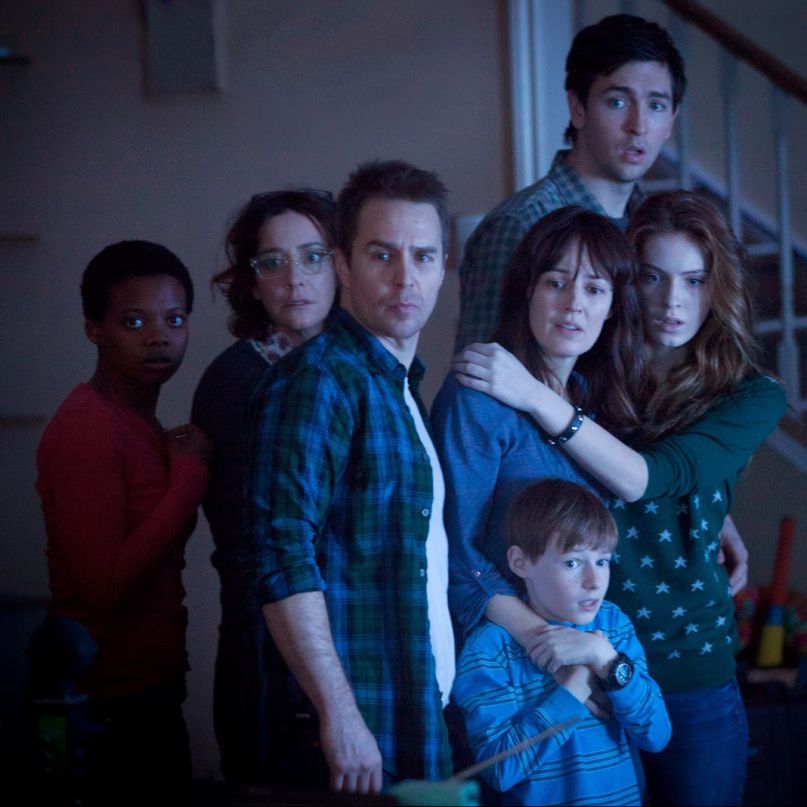 Ghosts in the ‘80s had it so much easier. If you’re a malevolent spirit trying to get by in 2015, you might wax nostalgic for the days when a dash of TV static was all it took to scare people out of their wits. I almost feel sorry for the poltergeists in Poltergeist, a reboot of the iconic Tobe Hooper film that first brought ghosts into the suburban tract home. When they’re not trying to find a way to make the iPhone 5 terrifying, they’re staring quizzically at a drone-mounted camera and wondering how in the hell it got into their netherworld. But technology waits for no one, least of all the dead.

If you came to this review with one burning question, it was probably, “Did the world really need another Poltergeist?” As you might have suspected, the answer is, “No, it most certainly did not.” The original film struck a nerve with the American public because it brought supernatural horror into a recognizable space. It convinced people that hauntings were not confined to castles and creaky old mansions—that nowhere, not even your own boring housing development, was safe. Three decades later, those housing developments remain just as boring and just as recognizable, which is partly why Hooper’s (and, yes, Steven Spielberg’s) vision has held up so well.

The new film contains a decent amount of scares, sure, but it’s mostly afraid of itself. It knows that it has no good reason to exist, and so it attempts to justify its existence with an orgy of technology that unmistakably belongs to the 21st century. The very first shot we see is a close-up of a zombie video game, and much of the film’s narrative exposition seems aimed at exploring the question of, “Hey, what would it look like if the original Poltergeist had drones and Macbooks and other kinds of cool new gadgets?” It’s an innately superficial question that doesn’t need answering, especially when there are films out there (Blumhouse’s Unfriended, for one) better equipped to tackle the thorny nest of techno-anxiety.

Even so, I’m tempted to look past all those annoying gizmos and give Poltergeist 2.0 the benefit of the doubt. After all, Sam Raimi’s behind this thing, and the last franchise reboot he produced was the wickedly fun, maybe-even-borderline-great Evil Dead in 2013. Here, Raimi has entrusted the directorial reins to relative newcomer Gil Kenan, but his sly humor still peeks through cracks in the script. Early in the film, parents Eric and Amy Bowen (Sam Rockwell and Rosemarie DeWitt) get a brief moment alone while touring their prospective house. “You have to try to like this,” Amy tells her husband. “Okay, I’ll try,” he sighs in resignation. I could almost feel the filmmakers reaching out to me, attempting to squash my cynicism before it sent me sprinting for the exit. “Okay,” I whispered under my breath, “I’ll try.”

But try as one might, it’s hard not to succumb to the fatigue of repetition here. The plot of Poltergeist is largely a rehash of the first film, with enough minor details changed to justify the “revisionist” tag. Pint-sized ghost whisperer Carol Anne has been swapped out for six-year-old Maddy (Kennedi Clements), a gregarious child to whom the dead are equally attracted. Clements strikes just the right balance between cute and creepy, and one could argue that she’s a slight improvement over predecessor Heather O’Rourke. The same can’t be said for her older siblings. The teenaged Kendra (Saxon Sharbino) is alternately reduced to screams and smart-ass remarks, while younger brother Griffin (Kyle Catlett) is a stiff, awkward kid who’s afraid of everything and thus destined to play the role of reluctant hero. The most welcome newcomer may well be Jared Harris as Corrigan Burke, a ghost hunter with an Irish brogue and his own reality show. Harris seems to understand the general ridiculousness of the plot, and he has fun skewering the legions of fake “ghost hunters” that have haunted late-night cable in recent years.

Remakes—or, excuse me, “revisionist reboots”—are only worth as much as the new ideas they bring to the table. We saw the good side of this a couple of years ago with Evil Dead, which smartly subverted gender roles and found some glorious new ways to kill off its cast. What the new Poltergeist lacks, aside from any real sense of purpose, is an iconic scene to call its own. There are plenty of callbacks to the first film, but nothing to rival the timeless terror of that evil tree scene, which remains the strongest piece of propaganda in favor of Amazonian deforestation. Even the clowns feel lazy and perfunctory here, though one scene involving a drill bit generates a good amount of tension before succumbing to 3D gimmickry.

Poltergeist’s obsession with such gimmicks, of course, stems from its near-pathological desire to feel “new.” It doesn’t feel new, and the sad irony is that, 30 years from now, this film will likely feel hopelessly dated. At that point, some cynical studio executive will probably order yet another remake, because why the hell not? I just can’t help but sympathize with the ghosts, doomed to stay the same kind of dead even as the world of the living evolves. Maybe we could learn a thing or two from them. Everything dies, after all, but not everything is needlessly brought back to life.