Coming to terms with the filmmaker's strangely satisfying notions of justice 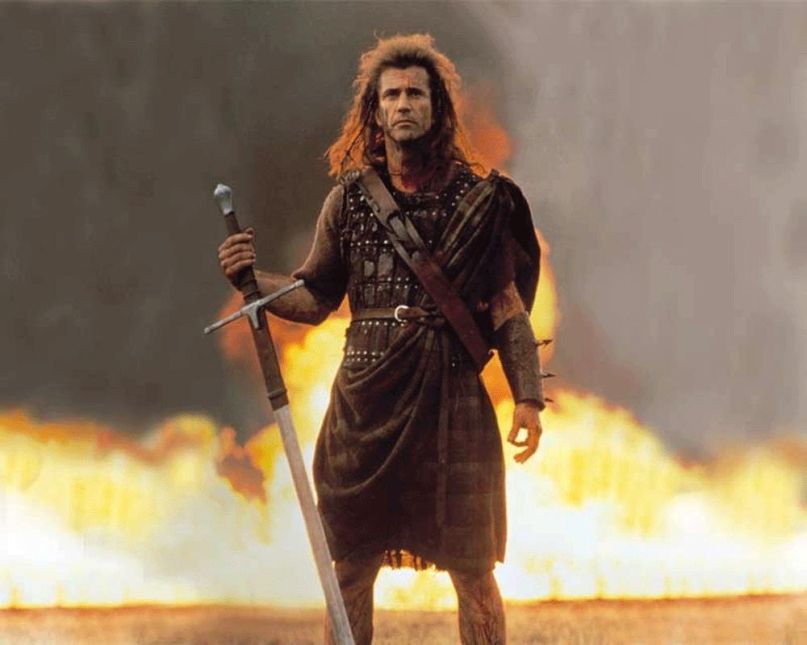 The following article was originally published in May 2015. We revisit it today as Braveheart turns 25 years old.

There’s something about heft that communicates moral righteousness. A case in point: I wasn’t raised in a particularly religious household, but throughout my childhood I maintained an unwavering reverence for the Bible. My own version sat mostly untouched on the shelf, 2,000 years of worship reduced to a glorified bookend for my comics and dog-eared Jules Verne novels. Still, I knew — never doubted, really — that its tissue-thin pages contained everything good worth knowing in the universe. I knew this because, well, look at how big it was! If I had ever actually sat down and read it cover to cover, I would have believed every word — such was the influence of size on my moral education.

The other “big” text from my youth was not a text at all. It was the 1996 widescreen edition of Mel Gibson’s Braveheart, the only film in my parents’ home collection that necessitated two VHS tapes. This brick-like artifact immediately captured my eight-year-old imagination, and I knew even before popping it into the VCR that it would teach me something important about life. I felt the same deep reverence toward Braveheart that I did toward the Bible, but the movie’s R rating and promise of bloody sword fights made it even more tempting to my young mind.

I didn’t know much about Mel Gibson at the time, and back then there wasn’t quite as much to know. Sure, he had incited some outrage with the comments he made in a July 1995 interview with Playboy, during which he had elaborated on his ultra-Catholic religious views, but this was still years ahead of two career-defining events: the release of The Passion of the Christ in 2004 and his well-publicized meltdown shortly thereafter. I came to Braveheart with no biases other than my own, which I based on nothing more profound than the physical heft of its packaging. I was rewarded with all the blood and sword fights I could handle, but also with something more: a glorious vision of morality that made sense to my young mind and one that I have since come to see as vital to the understanding and enjoyment of a Mel Gibson motion picture.

A brief primer for those uninitiated with Braveheart: The nearly three-hour film follows the exploits of William Wallace, a 13th century Scottish warrior who led the Scots against King Edward “Longshanks” of English in the First War of Scottish Independence. In the film’s version of history, Wallace begins his crusade against the English as retribution for the brutal execution of his family — first his father and brother, and years later, his wife. Not much is known about the actual Wallace, and the facts can be difficult to distinguish from the legend. This allowed Gibson, along with screenwriter Randall Wallace, to more or less create a hero in his own image. Viewing Braveheart as a history lesson is problematic; viewing it as a window into Gibson’s moral psyche is, however, fascinating, and it helps me to understand why I’ve always found his films so viscerally satisfying.

Everything you need to know about the rules of the Braveheart’s universe can be found in the film’s first truly great scene, in which Wallace earns swift retribution against the English soldier who slits his wife’s throat. After a bloody fight that sees Wallace leading his clansmen into battle for the first time, he corners his wife’s murderer and proceeds to slit his throat in a swift and merciless redistribution of justice. The smarmy asshole gets exactly what he deserves, and I can’t help but shudder with delight at his ultra-violent death.

When I was watching Braveheart for the first time as a kid, I probably thought nothing of this scene and its implications. It was simply another obvious chapter in the battle of good versus evil. I was ready to accept Wallace and his Scotsmen as “good” and the English soldiers as “evil” and simply move on from there. Revisiting the film nearly 20 years later, I’m struck by how forcibly it imposes this black-and-white view.

Gibson omits or actively distorts any historical detail that might sully Wallace’s moral high ground, including documented facts about his relatively privileged upbringing and his willingness to hang those who would not follow him. Meanwhile, he goes out of his way to make nearly every Englishman in the film severely unlikeable, to the extent that many of them come across as caricatures of evil. He would later perform the same ignoble service on the Jewish priests in The Passion of the Christ; one look at their yellow teeth and huge, gnarled noses is enough to confirm that the cries of antisemitism were at least partly warranted.

A Gibson villain is one of the truly detestable characters in all of film. But that’s only the half of it, because a Gibson villain always (always) gets what he deserves. This isn’t to say that the good guys never die, only that they’re allowed to die nobly, and more or less on their own terms. The bad guys in Braveheart must bear all the weight of their misdeeds, and the general rule of thumb is that the worse they behave, the more grisly their demise.

A microcosm of this can be found in the film’s depiction of the Scottish victory at the Battle of Stirling, one of the bloodiest depictions of war ever set to film. The Englishmen, already gloating about their imminent victory, are caught off-guard by Wallace’s army and suffer a humiliating defeat. Before the battle, one leading officer attempts to bribe Wallace and then scoffs at his rejection. He pays for this sin of hubris in true Gibson fashion: with a swift and satisfying decapitation.

Gibson gets plenty of flak for his gratuitous use of violence, but this violence is not randomly dispersed, nor is it inconsistent with the system of morality his movies present and implicitly endorse. Sure, it probably helps sell some tickets to the gorehounds out there, but its deeper purpose is to marry the superego to the id, to find the most primitively satisfying way to appease one’s internalized notions of justice. Quentin Tarantino has adopted this same style of violence in some of his more recent films, namely Inglorious Basterds and Django Unchained, each of which exacts bloody revenge on an historically unsavory group (Nazis and slaveowners, respectively). The difference between those films and Braveheart is that the former are essentially presented as fantasy while the latter wears the righteous mask of historical drama. Tarantino seems gleefully self-aware about the moral ground he’s staking, while Gibson gives off the impression that this is actually how he sees the world.

Maybe that’s why I tend to find solace in a film like Braveheart, as divorced from reality as it is. Reality is a cruel and complicated place in which the true criminals who run governments and large corporations rarely get their bloody comeuppance. I’d much rather live in — or at least retreat to — a world in which the assholes aren’t impervious to the flames licking at their heels.

Recently, I revisited Braveheart in honor of its 20-year anniversary and this very article, which I think I’ve been wanting to write for a long time. My roommate came in from his late-night bartending shift and sat down on the couch with me during the film’s final scene, during which Wallace is tied to a literal cross and wheeled out to be publicly executed. A lapsed Catholic who still harbors the fear of God, he was quick to notice how the scene is a near mirror-image of the Christian crucifixion. Something about this disgusted and offended him, and I could sort of see why. To portray Wallace as a messianic figure is one thing, but to draw a direct line from him to Christ is another. Then again, it also feels kind of perfect. Braveheart is a moral universe unto itself, and it’s only fitting that its most morally irreproachable character gets to die in the most sacred manner possible. My roommate left the room with a dismissive wave of the hand, but I stayed and sat through the credits, dreaming of a world different from my own.