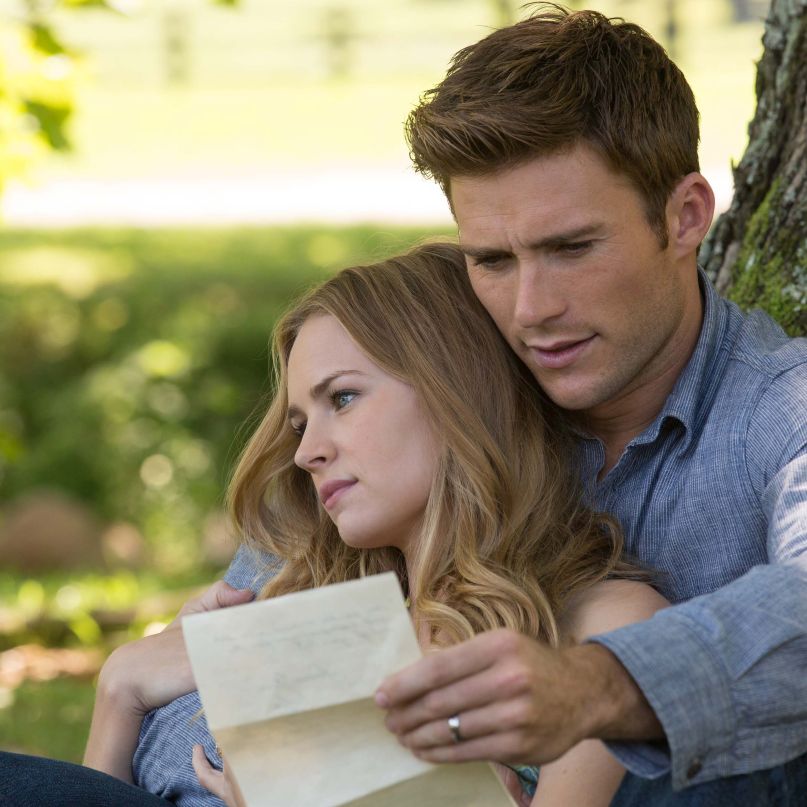 This past January, Mandi Bearley of Entertainment Weekly posted a snarky top 10 of “ways to spot a Nicholas Sparks movie.” That’s cute, and possibly helpful for the non-initiated in the world of Sparks Cinemania (this writer right here). Maybe it’ll help evaluate The Longest Ride’s familiarities, or clichés as we’d less kindly call them.

Bearley mentions a poster with two leads, on the verge of kissing. That’s here. “A wet kiss.” Sure, there’s love in the rain, plus the shower. “A memorable sunset,” well, if there was one, it’s not coming to mind. There is a “dance scene,” yes. In fact, two characters dance so hard in the middle of a room that it’s amazing no one gives them a second thought when they steal the floor. “A body of water,” that’s here – it’s a prelude to making sex. Because characters are wet. It’s a euphemism, you know? Anyway, there’s also a “romantic outdoor date,” if you count bull-riding practice in the rain and hunkering up against a tree. Hand-written letters, “that may or may not be read in a timely manner.” Oh yeah. “An awkward five minutes when the two main characters want absolutely nothing to do with each other.”

You know what? We’ll stop this madness, and just say that The Longest Ride gives us yet another Nicholas Sparks “romance” about young people loving, in the most poorly-spoken, convoluted way possible.

We’ve got two cute kids with, like, sooo many problems. Sophia Danko (Britt Roberston) is a Wake Forest senior that’s studying art. To her, art is like everything, and stuff, and she’s gunning for that big city internship at a gallery after she graduates. She’s the least cigarette-addled, most well-slept, and least edgy art major you’ll ever meet. She has a meet-cute with Luke Collins (Clint Eastwood’s son Scott), a rootin’ tootin’ North Carolina cowboy! He likes to ride bulls in spite of severe injuries, and just wants to be the best in the world! And that world is something like 25 insane, sponsored hillbillies. She’s too sophisticated! He’s just a meathead! But their love is hot, baby.

(Read: A Guide to the Insanity of Nicholas Sparks)

From there, it’s a whole lot of Sparksian will-they, won’t-they, but come on, they probably will. But wait, there’s just a little more. Sophia and Luke find a burning car on the side of the road, with an older man (Alan Alda, just so much better than this) trapped inside. Luke and Sophia rescue the man and his precious letters, which create a dueling narrative structure. And listen, the letters are written by something resembling a 7th grader. It’s all too much, yet never enough.

The Longest Ride is reasonably plain and inoffensive, but those are huge problems at this point. It’s just not very sexy, or challenging, or different. Plainspoken prose about bull-riding and art are turn-ons? That’s all you’ve got? Even when you want to get mad at retrograde gender politics, or class warfare, or the banality of the leads, it feels so pointless to bother. The Longest Ride knows exactly what it is, and seems to care very little. The movie’s so easy to measure by Sparks’ other works that maybe it might be worth seeking out other writers to adapt. You think that’s harsh? Okay, spoiler alert: The Longest Ride is a metaphor for life. Yes, life. Somewhere, Larry McMurtry and Jane Austen are having a laugh at this guy.

Needless to say, we deserve superior novelists from which to adapt our melodramas than Nicholas Sparks. We need more big romance movies, but not from some geek using the same teetering-on-illiterate outline.