Alabama Shakes: The Color of Sound 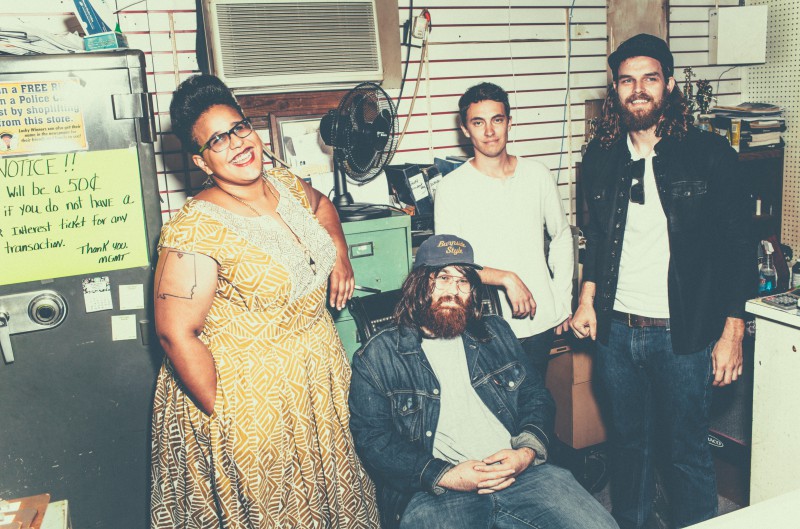 Few artists have announced their arrival quite like Alabama Shakes did with their debut album, Boys & Girls. One of 2012’s best releases, the record was bathed in a bluesy Southern rock, with sharp songwriting as immediate as it was immersive. Listening to that record felt like meeting a new person and realising you couldn’t possibly get through one more day without them. The type of person who isn’t afraid to trip you off your feet and slap you right in the gut with a difficult conversation. The type who forces your heart to work as a valve freeing all those frightening thoughts up to the surface.

So when I received their follow-up, Sound & Color, I was knocked for a loop. On Boys & Girls, Brittany Howard sounded self-assured while her voice toggled fluidly between stories she created from her own experience. But the new one? A plunge outward with the Shakes springing off from an emotional diving board into an inner depth only they could reach. It just won’t sit still, a modern-day genre-hop that owes almost nothing to those genres’ worn-out conventions, jumping from ’90s-era Prince to swelling vocal peaks and psychedelic soul thrashers.

Hearing a band overflowing with ideas is massively enjoyable, especially at a time when young bands arrive on the scene prepared with only one sound. Guitarist Heath Fogg’s walking baselines of electrified guitar rock, together with bassist Zac Cockrell and drummer Steve Johnson, are the brushes to the musical landscape of Howard’s vocal colorations. They dig from the inside, letting plenty of spirit ooze out, but Howard’s ideas are approached with such wrought emotional resonance that she manages to untangle relationships with every word she punches out.

I recently spoke with Howard just before a live show in Arizona, a night when the band’s striking songs yet again found a perfect match with their audience, radiating a skillful harmonious hue. Best you see them live, too, as they’ll be joined by the insatiably gifted Strand of Oaks, revelatory Father John Misty, and the charming Courtney Barnett.

Are the live shows you’ve been playing before the release of the new album different?

Oh, yeah. Every night we’ve been playing the entire new album so people get to see what the new music is like.

I totally get how some people have certain expectations for live shows, but how does it feel to play this particular set of new songs?

It’s great! They’re really excited to hear anything new. They’ve been waiting for so long, so it’s really refreshing. We play the old songs, of course. They love to hear those, but all in all, it’s going pretty great considering they don’t know the songs.

Your band’s story is pretty remarkable, arriving on the scene sound a-blazing with Grammy nominations and world tours. Was your debut, Girls & Boys, a road into understanding yourselves a little better and what kind of music you wanted to make?

I feel like that question is exactly why we took some time off to think about what was interesting to us and how we could continue inspiring each other in this group. One way to do that is through the music.

But do band dynamics not play a key role here, too? Do you feel like you complement each other well?

Oh, yeah. Of course. We’re a family, and when we play together, it reflects that.

Has it always been this way?

I think everybody in the group has been quality controlled! Every time anyone comes up with anything, I wouldn’t say the process is always easy. I’d say the process is democratic. We don’t get angry with one another about a guitar part that’s ridiculous. We all contribute, and we listen. We’re all just trying to make the best songs we can.

Your lyrical themes are often introspective, but certainly universal. Do you ever find you need to sit down and explain yourself to your bandmates?

No, they never ask, and sometimes they don’t even know what the song’s about [Laughs]. Our relationship is really quite musically driven.

And this particular album reflects that musical focus, but you’ve also done so much together in the last three years. Is there something that sticks out like, “Holy crap, I’ve just done that”?

There’s several moments that were surreal. We got to play for the President of the United States – “Man, we met the President?” We’re from a small town in Alabama, and that doesn’t happen. One of the most surreal things, though, for me was just driving across our own country. America is so huge, and we’re from one side of it, so seeing the mountains and desert for the first time, all the things I’d never thought I’d get to see was really beautiful. None of us had seen real mountains before? The desert?

Considering where you come from, I’ve really admired your no-nonsense attitude when it comes to talking about your work. Has dealing with the music business gotten easier for you?

Definitely, because I put the music first, but understand why interviews and radio performances are necessary. I understand the business better, and it’s become a great relationship to have if you want people to hear your music, but you have to make good music first.

So, you’d let that speak a little louder than your words?

Absolutely, and I wouldn’t say I’m a personality. I’d say I’m in a band.

Considering how much Alabama Shakes’ reputation coincides with your voice, it’s fitting to ask when you started singing?

It’s always been this way; I can’t remember the start. It was something that was just for fun in our household — you sing all you want, and nobody’s gonna slap you.

You drive your voice even further here, which during some points doesn’t even feel possible.

All of these things that we’re into we’ve always been into. You know, Sound & Color is just an extension of our sound. On Boys & Girls, we didn’t have the time and money to make the kind of record we wanted to make. I loved the record we made. It will always be a memory of us working hard, determined and driven to get something done because we loved it. In this situation, it was like, “Okay, let’s see if I could do everything I’ve always wanted to do.” I just didn’t want to do anything that was standard.

Some bands who get caught up in the dreaded “sophomore slump” end up restraining or changing their sound. Did you intentionally decide that you needed to just let loose and see what comes from it?

I think that having restraint is tasteful, and I do think we exhibited restraint on this record, because that’s just who we are as songwriters. I enjoy having space in a song instead of battering people. We could have hired an orchestra, but that’s not who we are – just because you can do it doesn’t mean you should. It wasn’t that we wrote this record to prove a point to anyone. We had to find a way to keep ourselves interested in what we do so we can progress.

Thinking about it now, “Gimme all your love” has a lot of great spaces in it. I can imagine that song is particularly fun to play live.

I was actually thinking about that song now. Always looking forward to that one.

Did you come up with the album title first or with the concepts that then led to the title?

I had a demo that was called “Sound & Color” and brought it to the studio. Everybody liked it, so we started working, and it got to a point where we realised this is a really great opening song. We just thought that this record said that verse — there’s so many different landscapes, and that was the one thing I was really proud of. I like the fact that it’s not one congruent thing because I get bored really easy, so it’s nice to jump from one thing to the next.

You mention how you’re bored quite often during the album. There’s that line in “Miss You” about saying certain things out of boredom and doubt. It’s such a good message. I think we’re consuming to avoid boredom.

I know! That’s the thing about people today. There’s so much input all the time, and when there’s none, we’re super bored. It’s just all pretty crazy.

But I agree that you jump across a lot of different landscapes on this album. Is there one specific theme?

You know how within everybody there are two people in one? That sense of duality is definitely a theme.

Is there a specific song from the album that really resonated with you personally above the rest?

Yeah, “Over My Head” is my favourite song on the record.

Ugh, you’ve got a lyric in there that burnt through my soul: “Loving so deeply I feel it through all my past lives.” Was that an easy place for you to go?

It definitely came naturally and from nowhere and everywhere all at once. When I say a line like that, I don’t really have to think about it.

Do you feel like touring so much in support of your debut album triggered that confidence?

Life is really strange. Taking time off from the road gave us a chance to assess our situation, like, if this is gonna happen to me, then I think it’s gonna happen to anybody. I was really in my head writing this record, and I think that’s what inspired a lot of these songs.

And when you see people singing your deeply personal songs right back at you, I can imagine that experience feels full circle as well.