by Dominick Suzanne-Mayer and Kristin Grandberry 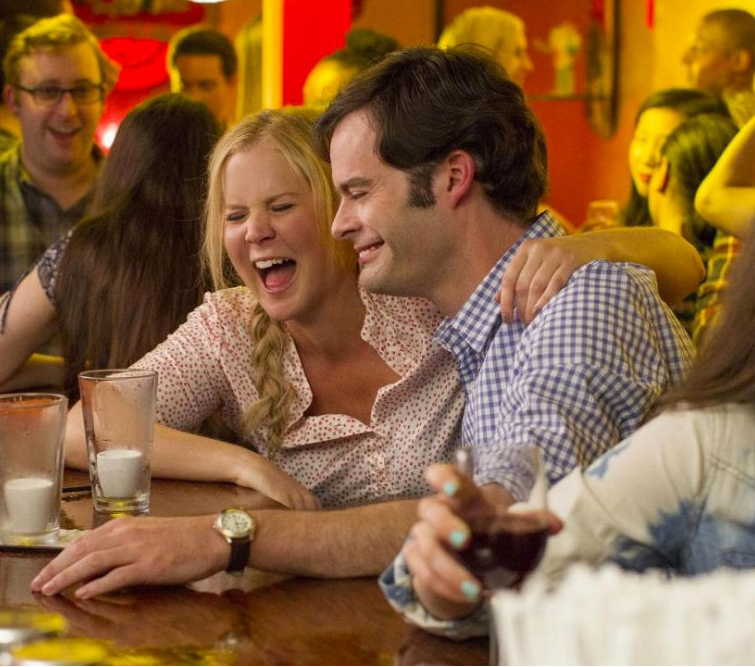 (Note: The screening of Trainwreck we attended at SXSW was named a “work in progress” screening, suggesting that the film may or may not be the version that comes out in wide release on July 17th. Accordingly, while we’ll be talking about what worked and didn’t with the film, we’ll be withholding our formal review and letter grade until that time.)

Dominick Suzanne-Mayer (DS): For the latest film by a director who’s had his hand in a number of the best comedies of the past decade, Judd Apatow’s Trainwreck definitely has no shortage of expectations to meet. After the lukewarm-at-best reception (both critically and financially) of This Is 40 three years ago, coupled with the previous collapse of the underrated but still low-grossing Funny People, some started to wonder if Apatow was nearing the end of his halcyon phase. Luckily, Trainwreck suggests that he’s found his mojo again, and a big part of that is owed to his latest lead, Amy Schumer. Not only does Apatow give over the screenplay reins to Schumer (it’s his first film he didn’t write), but she’s an utterly charming, perfect match for Apatow’s characteristically loose, conversational approach.

Set in New York City, Trainwreck at times plays like the filthiest imaginable take on the Meg Ryan romantic comedies of yore. Amy (Schumer) is a magazine writer and staunch anti-monogamist, a stance taught to her at a very young age by her embittered father (Colin Quinn). In her early thirties, she’s enjoying a liberated life of rotating sexual partners and general irresponsibility and can’t understand why her sister Kim (Brie Larson) would choose a life of marital bliss with her geeky husband (Mike Birbiglia) over the freedom she enjoys. But when she gets assigned to interview Dr. Aaron Connors (Bill Hader), a notable sports surgeon, she’s forced to question her way of living and how much longer she can keep at it. Jokes at alarming speeds and a parade of cameos ensue.

Kristin Grandberry: Without question, Schumer gets the best jokes and the most deep-down, guttural laughs, but she’s surrounded by a cast of characters that can keep up with her over-the-top banter. There’s Steven (John Cena), one of the few men lucky enough to reach the next level with Amy (where ‘the next level’ means going out on dates on more than one occasion), the man with the perfectly chiseled body and the unparalleled sex drive. Cena, the epitome of masculinity and self-seriousness, lets loose and pokes fun at himself in a way that’s rarely seen publicly except for those few fortunate enough to spend an afternoon binge watching Total Divas. It’s refreshing to see him out of the kid-friendly, WWE-manufactured persona and so committed to R-rated humor.

Another extended cameo that works surprisingly well is Aaron’s patient/rom-com ‘male best friend,’ LeBron James (playing himself), who follows the same self-deprecating route as Cena. He talks incessantly about himself when unwarranted and doesn’t quite know when to turn off his domineering basketball skills. He’s also an odd sort who gets indignant about watching Downton Abbey before it’s spoiled by his teammates and talks about sex like a preteen. But at the same time, he clearly cares about Aaron’s relationship with Amy and inserts himself where he can to make sure it flourishes. It’s a perfectly adept comic performance.

Either man’s placement in the movie could be read as a way to pull in Apatow’s typically male audience, who might otherwise dismiss the film as a stereotypical chick flick, but to mostly strip away their more masculine characteristics for more sensitive ones suggests that there’s much more to being a “man” beside lifting weights and playing basketball. Under all the humor in the film, and there’s a lot of it, Trainwreck slyly comments on modern gender roles and the ways in which they’ve broken down and been reshaped.

DS: The film offers a lot of commentary about modern dating and the needs prioritized by more and more people in a time where hookups are easier to come by than ever before and meaningful relationships come with all manner of new anxieties and terrors. In Aaron, Amy finds a partner who’s not only the consummate “catch,” a sports doctor with a sweet side who’s genuinely into her and wants to work through whatever problems might exist. (Hader is perfect for this, the exact kind of unassuming “perfect man” a woman like Amy could slowly get into.) But for Amy, who’s been raised to bolt at the first sign of trouble, Aaron’s not only a problem, but a weird aberration that she doesn’t know how to deal with. (There’s something both funny and kind of heartbreaking about her constant inability to believe that Aaron would want to share a bed with her post-coitus.)

Schumer’s screenplay is packed to the brim with an endless barrage of hysterical interplay and one-liners, but if there’s anything about Trainwreck that falls a bit short, it’s the film’s lack of commitment to some of its more emotional paces. In particular, the fraught relationships between Amy and Kim, and either with their ornery father, feel like they belong in a different and less sharp film than this one. The film is also so all-in on the romantic comedy revival that its final third teeters on the line between homage and self-parody; an exchange between Aaron and LeBron on a basketball court is exactly the kind of sequence that last year’s They Came Together skewered.

But where bits of Trainwreck may falter, the whole is supremely funny and works as a showcase for Schumer, who in a just world will be a comic star as the result of her performance here. There’s a sincere, appealing vulnerability to Amy, and Schumer isn’t afraid to push herself to some occasionally unlikable places for laughs or pathos or both. Trainwreck is refreshingly free of judgment in its tale of a highly amorous woman, but it recognizes well the difference between enjoying yourself and selfishness and moves back and forth between those modes with increasing frequency as it goes on. Like any of Apatow’s other films, Trainwreck is a little long and a lot meandering, but like his best works, it’s full of so much affection for everybody in it that you could easily spend even more time with these people. That’s especially true for Amy, who gets high too often and starts arguments even she knows are foolish and is more often than not her own worst enemy. But she’s also just a person, with flaws and needs and neuroses, and it feels strangely radical for a movie that’s so deeply rooted in the familiar.