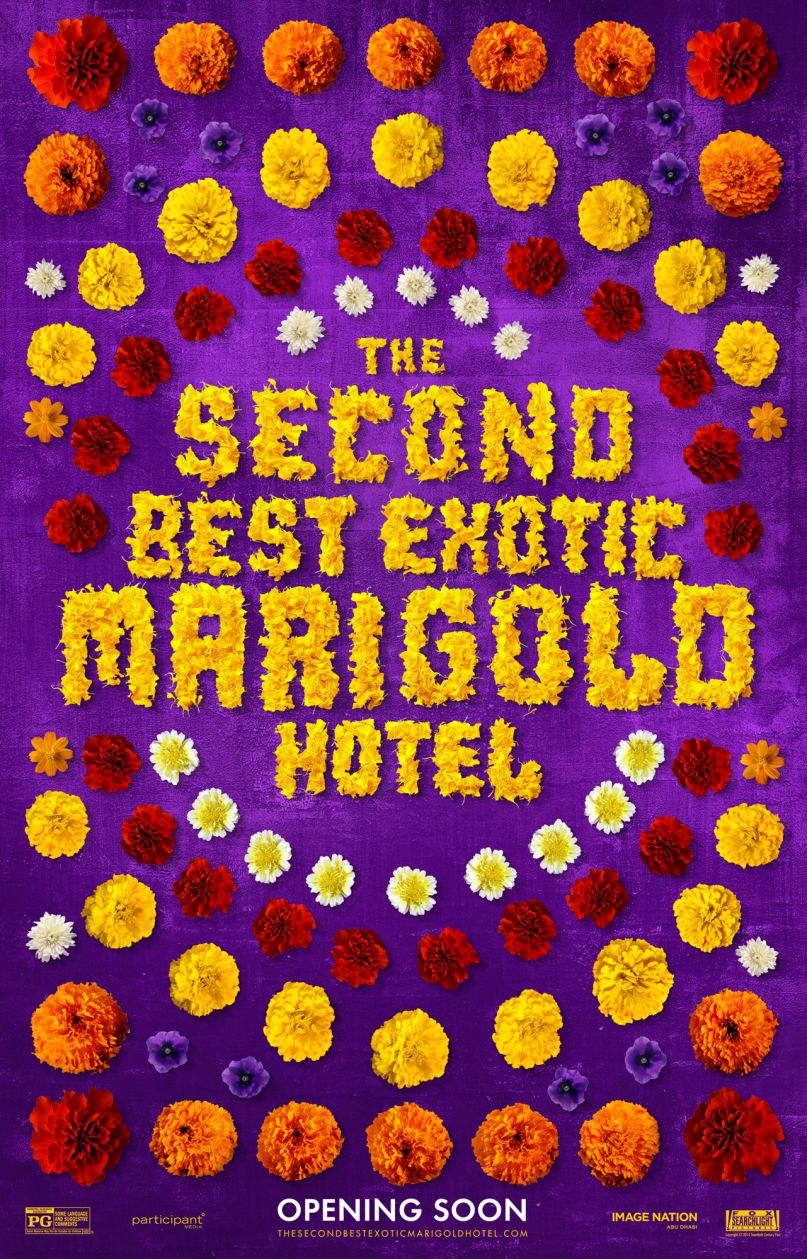 If you’re coming to The Second Best Exotic Marigold Hotel with cynicism, quash it. Better yet, let Judi Dench’s Evelyn Greenslade do that for you: “How many new lives can we have? As many as we like,” answering herself with a calm buoyant tone. The line comes late in the film, but its core is established early (and carried on from the first outing). They have lived, they continue to; they aren’t asking for permission, just trying to enjoy the rest of it.

The structure is laid fast. Sonny (Dev Patel) and Muriel (Maggie Smith) have travelled to San Diego for a pitch meeting with a retirement home conglomerate in the hopes of fiscal backing for expansion and franchising. Patel is wholly committed to the mania and fumbling compassion of Sonny, which almost reads as caricature if it weren’t so endearing and there weren’t genuine moments of self-doubt later. Smith unlearned her racist streak from the previous installment and adopted lighthearted misanthropy; her language is described as “salty,” marked by “economy and pith.” We can look to Smith as the emotional center of the film, and she relishes her quiet status as the lynchpin personality in the corps of geriatrics.

With the need to impress these investors and their forthcoming disguised inspector, the film finds its narrative push. Tension is created by managing the impending inspection, hotel maintenance, and Sonny’s wedding to Sunaina (Tena Desai, who gets shuffled into the background a bit). That’s all without mentioning the other hurdle involving the imagined business and romantic threat of newcomer Kushalb — a family friend of sorts. Before even getting to the personal dramas of tenants, this is our first sight of what may be too much on the Second Marigold’s plate. A miniseries might have suited it better.

Quickly, Second Best moves through its reintroductions: Evelyn (Dench) now works in fabrics, buying for a company looking to expand with her on board. She still hasn’t made any advances (we are reminded, often) with Douglas (Bill Nighy), still one given to compromise and loveably befuddled in both romance and the temple tours he gives. Madge (Celia Imrie) is still a tart, in the best way /for the movie’s levity, with two suitors; she’s at the impasse, though, of the moment before you decide what you want, often reflecting on this with her driver Babul (Rajesh Tailing). Anxieties about settling in and staying together are encroaching on Norman (Ronald Pickup) and Carol (Diana Hardcastle), with an off-putting storyline about potentially putting a hit on your partner while drunk in a Tuk-Tuk (a fast and omnipresent open-air cab). The devilishly high-strung Jean (Penelope Wilton) pops in after leaving at the end of Marigold to poke at characters, catalyze feelings, and ask Douglas for a divorce.

Much of the film is made of character interactions, and scenes are generally set for two. Smith and Patel have the greatest balance and are the most fun to watch, followed by the few times we see Smith and Dench quip about assumptions that the other was dead, easing themselves into the emotional truths they uncover. Dench and Nighy together take on much of the tonal burden. Their affection for each other comes with trepidation, eventually languishing and missing each other rather than having the hard talk they need, and it’s disengaging.

The film signposts each act: The Engagement Party, The Family Party, and The Wedding. Though the story focuses on Evelyn and Douglas’ will-they-or-won’t-they, this is its attempt to reorient audiences with the intended center of the story, Sonny and Sunaina’s nuptials. Though they work hard, the best of Ol Parker’s writing goes to the elderly tenants; that one plot point is relationship strife based off Sonny’s preoccupations with expansion and his guests feels like a sad omen.

Despite the basic narrative drive being conversational, several come out lopsided. Delivered with great tone and often the right amount of import, they are punctuated by the listener offering a play on “What? I didn’t catch that” for comic relief. It gives the impression that these conversations are more soliloquies than anything else. While this is interesting as a technique, and squarely in the wheelhouses of the theatre-trained ensemble, its frequency mutes the method.

Second Best has the makings of a farce, of paths crossing and truths uncovered almost incidentally. What it ends up feeling like, however, is that toddler toy with wooden beads on twisted metal rods. Compelled to focus on one, perhaps because of relatability or want for their fruition, you push along with it, losing sight of the whole set until it crashes into its mildly cathartic ending.

It’s commendable that the franchise continues and adds to discussions on relationship boundaries, maintaining communication in the midst of personal introspection, and polyamory. We see the navigation of a burgeoning career and its possible cost or complement to personal growth. There are explorations of self-worth while alone, coupled, or in new professional pursuits. That all of these are focused on the elderly resonates as well, suggesting to audiences of many ages that these are conversations that continue to happen through life.

Second Best has charm and exuberance to blend many of its misfires, and yet it’s hard not to glare beyond structure, namely the act of placing affluent British people in India. The movie (like its predecessor) went by without a breath of occupation. That’s not to expect a “big talk,” lest it pull the narrative in another direction, but the fact that the only acknowledgement of colonial power is a club named the Viceroy* is wrong.

Still, the film makes its passes at inclusion of the locals. Kushal and Sunaina’s parents step in; Evelyn takes on a business partner she used to haggle with in the markets, they converse regularly and as equals; Madge’s two suitors are wealthy Indian men and finds a confidant in her driver Babul; Muriel furthers her friendship with the hotel’s maid, bonding as a former housekeeper and giving sleeves and sleeves of biscuits to her for her family. Yet in listing these moments there’s the unshakable feeling of grasping at justifications. Nearly a century of colonization, and its still-felt ramifications, is shrugged off. That these characters were alive during the Raj makes it worse.

* Viceroy is the shortening of Governer General, or head of the British administration in India during occupation (and shortly after). It’s also on the veranda of a deck where Richard Gere stages a small seduction though description of his novel’s plot, about a man coming alive because of the new place he’s found in India. It’s another irksome narrative – India isn’t new to Indians, and it’s not just meant for your reawakening.