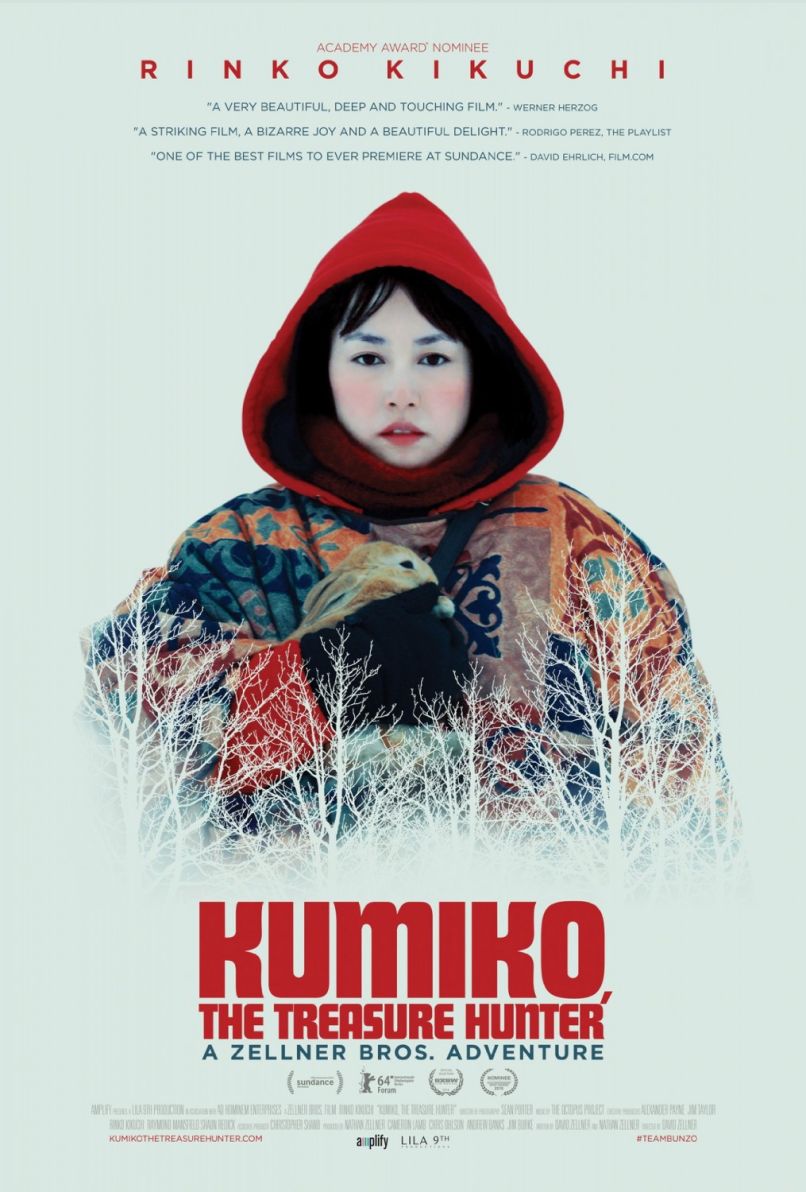 By any reasonable standards, Kumiko (Rinko Kikuchi) is a painfully withdrawn, shy young woman. She’s so deep within herself and lacking in human interaction that it’s no wonder she spends her days fervently re-watching a battered VHS of the Coens’ frosted opus, Fargo. Kumiko watches it over and over like it’s the Zapruder film, dissecting it and trying to discover where Steve Buscemi hid all that money in a briefcase on that Minnesota highway. Or was it North Dakota? It’s like an American myth at this point. It’s anywhere, U.S.A. and Kumiko really wants to know where the money is. Like, for real. The actual money.

She thinks Fargo is gospel. She desperately wants to seek out the money, or the “treasure” as she insists. When life is already ridiculous, what’s the harm in going all in and getting at your own personal pop cultural windmill?

But there’s a reason this film is called Kumiko, the Treasure Hunter, and not Kumiko’s Mystical Journey, Kumiko Comes to America, or just Kumiko: it teeters on dark exemplum, while consciously winking at its own preposterousness. Kumiko, the Treasure Hunter pretty much succeeds as a work of magical realism. This trip to Minnesota, her fantasies of a big briefcase, it’s a strange world that Kumiko has retreated into and it might just be her salvation.

Her boss is demeaning, her co-workers are conniving, her mother’s overbearing. Kumiko is pummeled by the anxieties brought on by trying to get by. She can barely stand to look a person in the eye, let alone get up to work every day. For all the silence and navel-gazing, it’s a confidently constructed performance by the enigmatic Kikuchi. Kumiko is the physical approximation of when the mind wanders so far from home that the body can barely cope. She emotes volumes with minimal action, and yet it evokes all sorts of feelings, from sympathy to sadness to crippling optimism. Kikuchi not only makes you worry, but hope for the best.

She lives a life of solitude with her rabbit Bunzo, eating ramen, in near darkness, quietly watching Fargo and taking notes. She even cross-stitches a map of a movie still to help her find the film’s “treasure.” She tries to steal a map of Minnesota from the library because the thought of having to check out a book, or get a card, or even talk to a clerk petrifies her. To her, Fargo’s not about the money, but something more meaningful. It’s an escape. The briefcase is hers to claim as an adventurer.

Without cracking the fragile story’s pleasures and disappointments, Kumiko eventually heads to Minnesota. It’s a slow, arduous experience, but it intrigues until the very end.

For a movie utilizing scary American obstacles like tourist endangerment, fear of exploitation, and the murderous winters of the Midwest, Kumiko uses them shrewdly and works to maintain a sense of mundane wonderment via small notes like the bedspread that Kumiko uses as a protective shroud. The film’s little realities, like the horror of having no money or not knowing the language, take on tragic qualities.

Deadpan humor around cultural differences or anti-social behavior doesn’t always fly. If you can’t buy in to the belief that this woman might be entranced by movie, and that seems reasonable, Kumiko could easily be confusing or just bizarre. Go with Kumiko, and she’ll keep you with her. The film finds its balance, and turns allegorical, as it considers the bittersweet folly of dreams. Kumiko is special and legitimate in that way; she’s just naïve enough to take on the burdens of hope and adventure.

At the risk of turning sophomoric, there’s a great discussion about interpretation and how individuals see art at play in the film. John Berger’s Ways of Seeing vaguely springs to mind, and he’d probably clap his hands in glee over this movie, overjoyed at how far beyond the norm one woman carries her interpretation of a landmark work of art. It’s funny how the smallest things, like a busted tape, can take on titanic qualities in the eyes of an individual.