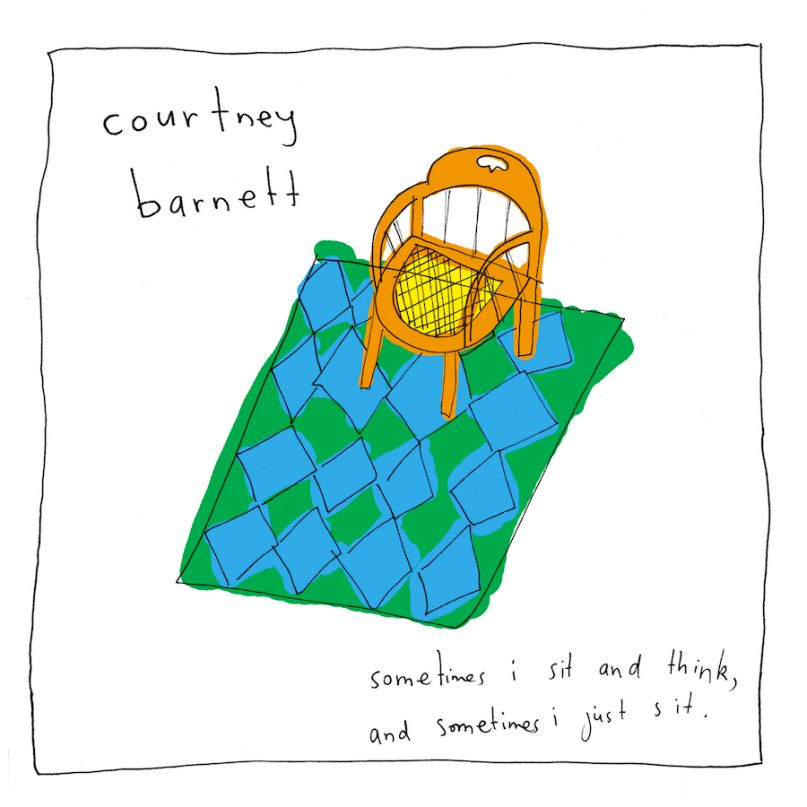 “Take what you want from me,” Courtney Barnett repeats near the end of “Kim’s Caravan”, a highlight from her new album, Sometimes I Sit and Think, and Sometimes I Just Sit. That bit of exasperation is surrounded by some clever observational lines and a fiery guitar solo, but it sits at the song’s core, a reminder that Barnett is more than a Seinfeld-ian joker pointing out life’s little quirks. Like Stephen Malkmus or Kurt Vonnegut, Barnett looks at the mundane with a skewed perspective, turning it over in her mind and transmogrifying it into something extraordinary.

But back to that key moment from “Kim’s Caravan”. After letting out an instrumental sigh of empty-set bass and astral harmonies, the lyricist so notable for her real world observations gets a little surreal: “Satellites on the ceiling/ I can see Jesus and she’s smiling at me/ All I wanna say is.” And the song ends there. Barnett says a lot over the course of Sometimes I Sit…, but at this emotional climax, she leaves a thought to linger. Though her output to date has been uniformly strong, her formula could be seen as predictable: talk-sung eccentric looks at the real world over slouchy indie rock tracks. But this moment without language acts as a charming moment of raw honesty, a look behind the curtain of her witty turns of phrase.

That’s not to say that Barnett has been projecting herself as an infallible social commentator, always ready with a quip. On the excellent lead single “Pedestrian at Best”, she warns us not to think too highly of her: “Put me on a pedestal and I’ll only disappoint you,” she groans. “Tell me I’m exceptional, I promise to exploit you.” Unsurprisingly, the track is also one of the album’s scruffier moments, the guitar distortion and burnt edges around her vocals matching her forceful delivery. She doubles down on “Debbie Downer”, noting that she’s “not fishing for your compliments” before calling herself boring and neurotic. But her summary of life (“We had some lows, we had some mids, we had some highs”) is the sort of “no shit” understanding of the world that largely gets passed over for the extremes of all lows or mostly highs.

Barnett clearly doesn’t always take herself or her surroundings seriously, but that doesn’t mean she doesn’t have serious things to say about both. The beautiful “Depreston” ostensibly details the singer’s search for a home in the suburbs of Melbourne, but it unlocks deep feelings about aging, mortality, and memory. There’s something telling in the switch from living near coffee shops to having her own percolator; the transition into adulthood can be seen in the art of homemade lattes as well as the suburban move itself. The house she tours has a two-car garage and pressed metal ceilings, but the things she latches onto (“the handrail in the shower,” a photo of a young man in Vietnam) are the remnants of an older person who left the place “a deceased estate.” Though the world often boils value down to property itself, she focuses on how property represents individual people. It’s with a wink and a tear, then, that Barnett repeats a line about how those memories can be burned away by a cruel world: “If you’ve got a spare half a million/ You could knock it down and start rebuilding.”

Some of the tracks revel in their simplicity. After spending the majority of the twanging “Aqua Profunda!” describing an attempt at impressing a fellow swimmer in the lap pool, Barnett describes how her lack of athleticism caused her to sink “like a stone/ Like a first owner’s home loan.” Later, “Nobody Really Cares If You Don’t Go to the Party” finds her brain circling a decision that many struggle with on Friday nights: “I wanna go out but I wanna stay home.” She details a crumbling hotel room on “An Illustration of Loneliness (Sleepless in New York)” in the way that only an insomniac longing for their significant other halfway across the world could.

Barnett doesn’t want to be put on a pedestal, but the beautifully rendered, poetic observations on Sometimes I Sit… might just put one under her anyway. Luckily, she doesn’t seem like the type of person that would be changed by that sort of experience. If anything, it’ll just give her a fresh set of strange situations with which to draw out new realizations of the world’s absurd depth.