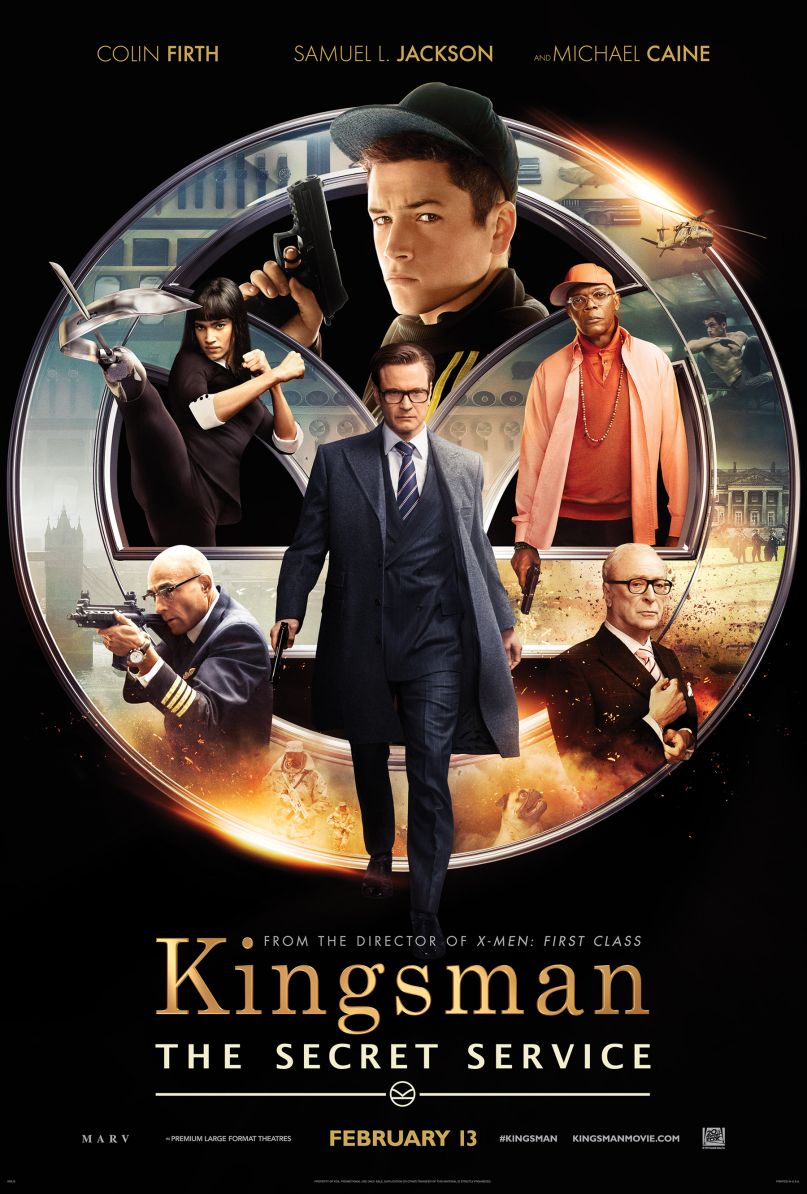 Director Matthew Vaughn’s latest film, Kingsman: The Secret Service, is an attempt at finding a balance somewhere between Austin Powers and James Bond that doesn’t quite succeed. It’s an R-rated movie designed for 15-year-old boys who will no doubt be enthralled by its excessive violence and equally strong language. I’m by no means against either appearing in any form of entertainment, but too often in Kingsman, the cursing and blood spills seem forced, as though anything less than an R just wouldn’t do. There’s one particularly crude exchange near the end of the film that goes against what the protagonist now stands for, all in the name of a cheap laugh. It’s a pity since there are plenty of laughs and applause to be mined from its strong, veteran cast.

The Kingsmen are a group of underground spies in need of a replacement for a fallen member. Headed by “Arthur” (Michael Caine), “Merlin” (Mark Strong), and “Galahad” a.k.a. Harry Hart (Colin Firth), they must find a new spy to join their ranks while at the same time dealing with Richmond Valentine (Samuel L. Jackson) — a billionaire whose latest sales pitch could mean the end of the world as we know it. Oh, and he has an assistant with blades for legs (Sofia Boutella). Watch out!

A leading candidate to become the new “Lancelot” is Eggsy, played by newcomer Taron Egerton. He’s led a tough life which includes petty crime, but is given an opportunity by Harry to turn his life around by trying out for a role in his organization. Egerton takes the role and owns it, despite some of the lackluster characters surrounding him. The usually reliable Caine sleepwalks his way through the film as the spy ring’s leader “Arthur”, while another recruit and pseudo love interest, Roxy (Sophie Cookson), merely fulfills the role of someone Eggsy can root for. Jackson plays Valentine as a villain with an exaggerated lisp, as well as a love of McDonald’s during dinner meetings. His performance is amusing at first, but soon falls into next-generation Pacino territory with a dependence on shouting to convey any emotion. Django Unchained was apparently a latter-day anomaly.

Despite its flaws, the movie isn’t a lost cause by any means. Vaughn has proved his action mettle in earlier fare such as Layer Cake, which coincidentally begat the new Bond era, as well as X-Men: First Class, which managed to remove the bad taste of Brett Ratner’s series-threatening X-Men: The Last Stand. I feel that another Mark Millar comic Vaughn adapted, Kick Ass, missed the mark due to the aforementioned problems that plague Kingsman. However, Vaughn has a strong eye for action that is best showcased during Harry’s man-on-multiple-men-and-women fights — the first of which takes place at a pub while the second goes down at a white supremacist church. The church sequence is hard to root for…until you remember that he’s taking down a bunch of bigots under plot-twist circumstances. Suddenly, the violence becomes more palatable.

And Firth’s performance as well-dressed and good-mannered superspy Harry Hart is the best part of Kingsman. He adds class to the whole affair, exuding charm whether he’s enjoying a stiff drink or beating up a gang of hooligans in a pub. Hart’s a spy cut from the same sophisticated cloth as Sean Connery’s or even Roger Moore’s Bond (down fan boys), leagues away from the likes of today’s sourpuss spies. The role is a change of pace for an actor who’s proven his mettle in Oscar bait (The King’s Speech), BBC breakthroughs (Pride & Prejudice), and romantic comedies of years gone by (Bridget Jones’ Diary). For the first time, Firth is playing the part of someone who kicks ass without taking names, albeit politely. He is consistent, even when the rest of Kingsman starts flying off the rails.

Leaps of logic aside (Harry flies from the UK to Kentucky in what appears to be 30 minutes), there are moments that take Kingsman from its predictable boy-becomes-spy motif to places where not only comic book movies fear to tread, but most movies. I’m amazed one such death sequence of a real-life, well-known figure hasn’t been overanalyzed to death via other reviews, but I have no doubt said sequence will be discussed ad nauseum after the film’s release. My jaw dropped at the gutsy decision to leave it in the film.

Vaughn brings back levity to the spy genre that is now mostly bereft of it, with several references to remind you of his intent. Unfortunately, despite moments of inspired creativity, Kingsman proves frustrating. For every moment you enjoy, there’s a moment creeping up from behind to dislike. Vaughn’s action sequences are technical achievements; that is, until he starts relying on the worn-out slow-to-real-time motion shots. Eggsy is a likeable, tough lad although he’s also a little bit of a jerk. Harry Hart is great …well, he’s great through and through. Maybe the next mission will have a little more focus.

Oh, and keep an eye out for one of the most inspired “fireworks” sequences in recent memory.