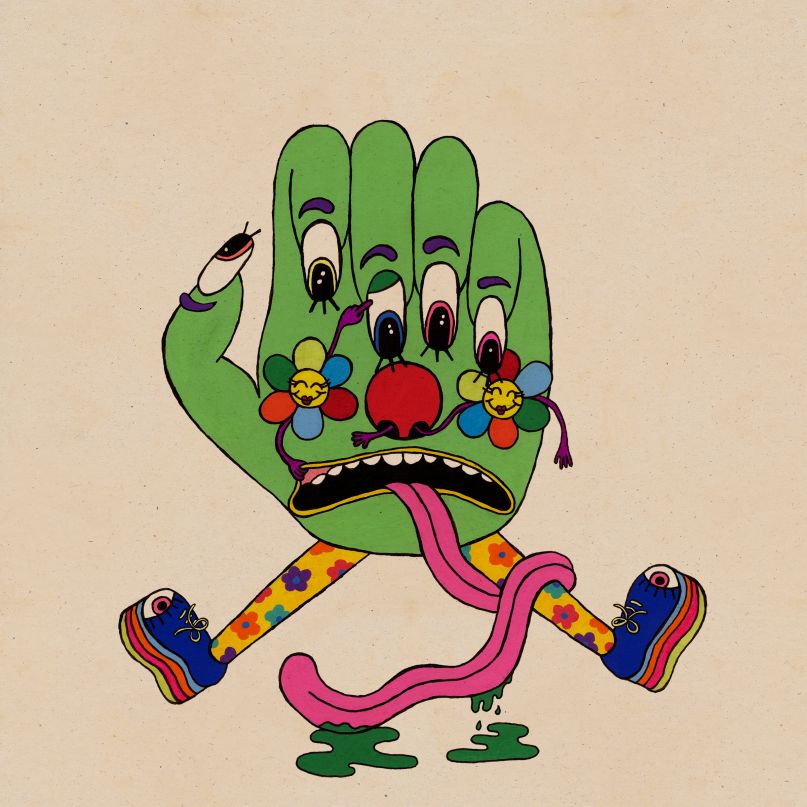 What comes across as effortless whimsy often circulates through the inner workings of Dan Deacon’s brain for hours. During a recent interview, the iconic Baltimore-based producer opened up about a stress addiction where he “liked to do the most logistically impractical things, like adding 20 people to my band and touring on a bus that runs on garbage, just to create situations that were impossible. I was addicted to the stress and the adrenaline and not even appreciating what I get to do, and that resulted in a lot of anxiety and confusion about my work.” Gliss Riffer is a reaction to that realization. In order to achieve new artistic freedoms, the process had to be simplified. Composed almost entirely of solo sessions, his newest eight-track offering is a return to the form of 2007’s Spiderman of the Rings, an era before Deacon became fascinated with the evolution of the classic orchestral ensemble. But both Bromst and America (the 2012 precursor to Gliss Riffer) left an indelible mark on the producer’s psyche. The universal motifs of his discography are now refracted through a more personal lens.

As with the majority of Deacon’s recorded efforts, the album’s title illuminates both theme and context. In musical terminology, glissando (“gliss”) is a term for a slide from one pitch to another. “Gliss riffer” cleverly describes Deacon’s own proficiency in flipping a tone innumerable times before exploring the next frequency. The term also identifies an intrinsic ease in this ability — a riff is just the soul of the guitarist that pours through the fingertips. That image might be wishful thinking, because it’s easier to envision Deacon shuffling around his hotel room (most of the album was recorded on the road between his Arcade Fire support performances in 2014) trying to pull just a few more twisted moments from the loops that line the emotive electro-bounce of “Meme Generator”.

On record or in concert, Deacon offers escapism at its finest. As he explained before the release of America, Deacon uses music as a means to make sense of his surroundings. At the most basic level, he excites an unbridled dance party — even if only attended by one. Bodies react to “Sheathed Wings”, “Mind on Fire”, and “Learning to Relax” before minds can wrap themselves around the narratives contained within. That is the technique that Deacon has been so mindful of since he began instigating collective performances in clubs back in 2002. He understands that attention spans can be short, and if you want to get a message across, you’d better make the beat infectious.

No matter the upper-register nuances, Deacon’s percussive lines are solid enough for even the most easily distracted listeners to grasp. Often, his arrangements develop along a deep, bodily rhythm. Also explored during Bromst’s “Of the Mountains”, this tribal vibe pulses through the extended noise of “Take It to the Max”, surfaces as a dreamlike interlude during closing track “Steely Blues”, and is elevated during the chants of “When I Was Done Dying”, a reflection on what might actually happen upon the final breath. Whereas Deacon of 2003 was intent on scrambling minds with Meetle Mice, in 2015, he aims for togetherness and awareness.

When you’re running in place as fast as possible or creating a human tunnel at one of his interactive shows, it might be difficult to appreciate Deacon’s new lyrical depth. Following a battle with laryngitis, he sought to inject his dense instrumental textures with fleeting vocal releases. The duet within lead cut “Feel the Lightning” suggests otherwise, but Deacon actually provides all the vocals on Gliss Riffer. The vocal distortion does more than provide yet another tone for Deacon to contort (sometimes into a striking Ian Curtis timbre); it represents another aspect of Deacon’s character that might have formerly been too consumed by stress to shine through.

While Deacon has always shied away from a title track, “Learning to Relax” could have been the one opportunity. Sure, the track must have lent itself nicely to that Arcade Fire tour (as does “Mind on Fire”), but the celebratory groove, stuttering sample, and “just take me out of my mind” hook capture the spark behind the album’s creation. As his shows are a unique opportunity in and of themselves, these albums are meant to be enjoyed as long-term experiences. To choose one song to share a title with the album, no matter how fitting, would place it above the rest … and that just isn’t Dan Deacon.

Deacon has mentioned planning for the “long game.” Nearing his mid-30s, he understands his time on the road is limited, and he would rather not spend it hustling to arrange, transport, and feed 20 other individuals. Deacon might also say the return of his larger ensemble projects are years ahead, but it is so easy to envision an eight-piece outfit rounding out songs like “Take It to the Max”. In 2015, Deacon is one of the few veteran artists who faces the dilemma of whether to strike out solo or take the band on the road. After spending Valentine’s Day weekend being courted by this gliss riffer, the only clear decision is to make it  dancing-room only.

Essential Tracks: “Learning How to Relax”, “Sheathed Wings”, and “When I Was Done Dying”