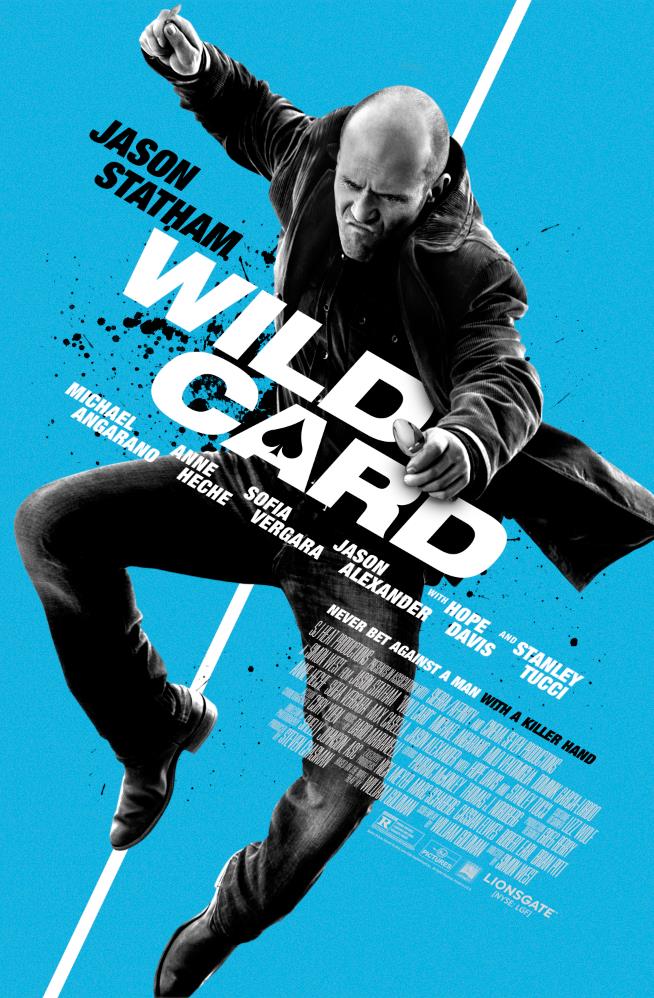 So a guy walks into a bar. He’s got a skuzzy mustache, a rug, and he’s about to meet his girl and beg her to come with him. Somewhere. Anywhere. She’s hesitant. Suddenly, a steely drunk comes up to the guy and starts kicking up some shit. The mustache man and his vixen bolt, and the drunk comes come out to keep at it. The mustache, takes offense, and knocks the drunk out. The girl fawns. Our hero.

Needless to say, all of this was a con.

Mustache man, well, he payed off the other guy, Nick Wild (Jason Statham), and it worked like gangbusters. And it’s just what Nick does for a living. This is the fun, quick little opening scene that sets the tone for Wild Card, an amusing potboiler that’s not a total bust.

Okay, yes, the fact that the lead’s name is “Nick Wild,” which serves the sole purpose of a chumpy pun title, does not bode well. But it’s all good, really. Part ‘70s crime caper, part character comedy, part hit-punch actioner, Wild Card plays the hands it’s dealt with an amusing and acceptable lack of ambition (faint praise, yes). It’s not blackjack, but it wins its hand at a low-stakes table.

Based on William Goldman’s lurid 1985 novel Heat, which was adapted into a 1986 Burt Reynolds mustache vehicle, Statham is the sort of eponymous Wild. He’s a Las Vegas bodyguard, with a compulsive gambling addition, and mercenary-grade fighting skills. Wild ekes out a living helping folks in need, then pissing it away at the tables. He’s surprisingly charming and quick-witted for someone who looks like ex-Special Ops. It’s a good role for Statham, because he uses his words in addition to his fists for a change.

When Nick fights, the movie is openly obnoxious; in one bit, “White Christmas” plays during an over-choreographed beat-down for full ironic effect. Director Simon West (a lot of heartless actioners) assembles stage combat with too much cutting, handheld camerawork and whip-and-crunch sounds. Oh, how stupid action scenes can get with slow-mo nose smashing and shin cracking set to techno-dance throbs.

Nick moves from archetype to archetype as he tries to get in and out of any situation. Normally, lack of screen time for character actors like Jason Alexander, Sofia Vargera, or Stanley Tucci might be a problem, but Wild Card leans on their strong presences in such a way that it’s not problematic. They all say or do something quick, even funny, and then on to the next scene and/or person. And it all works with Nick dolling out good lines, keeping cool. His charisma and addictions ring true. Of course, it’s all very cliché (a Ray Charles song during a gambling montage – how bold), but at least everything’s got some color to it. That probably has a lot do with William Goldman more than anything. It’s his first produced, official script in 12 years (some failed projects like Shazam! over here, some uncredited doctoring for Zombieland over there).

Goldman is easily considered one of the best screenwriters of all time (somewhere next to Ernest Lehman for durability), and his style is present, thank Gamblor. Not even Jason Statham, or Simon freaking-Quentin-Tarantino-makes-fun-of-him West, could torpedo Goldman’s voice.

The unique Goldman situations carry the film. Every scene has the slightest twist or surprise. Plus, the snappy word choices and attitude are there, his non-conventionally delightful way of speaking. You know, the smart-ass remarks of William Goldman. Take Nick’s interaction with a kind waitress, setting up his entire deal and ethos within three snazzy lines.

“Yeah, well, when it does, I’ll grab that fucker by the throat.”

Nothing on screen of late sounds remotely close to that clever or odd; Tony Gilroy or Joss Whedon films are the best imitators we have (funny, given that Gilroy is a protégé of Goldman, Aaron Sorkin too).

Singing “Ah, Sweet Mystery of Life” as a distraction? Potential castration with lines like “the envy of all mankind” purred by a scorned woman? A Santa cap in the face of gangsters? That opening with Nick and the cutest little ruse? All great stuff. It may be a remake of an adaptation, filtered through feckless hands, but it feels more original and confident than most movies out right now, even if it’s just as dumb.