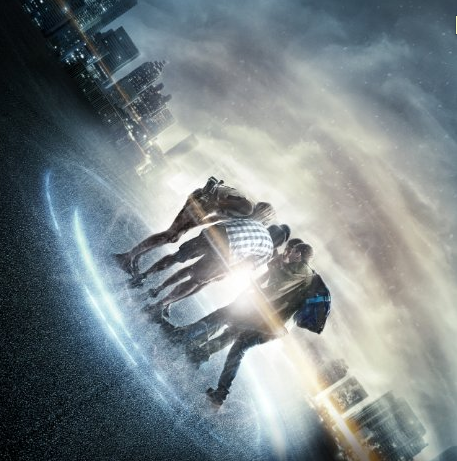 What would it take for you to go back in time? Most temporal rebels have one heck of a motivating force: the death of a loved one, in the case of the H.G. Wells novel that started it all, or the dire need to ace a history project, in the case of Bill & Ted. Maybe, like Marty McFly, they just get flung back there, and have to set everything right for the present again. In director Dean Israelite’s debut feature Project Almanac, our teenage time-hoppers go back in time, well, kind of just because they can.

Project Almanac is the story of five kids and the most durable camcorder in the universe. It borrows the found footage conceit from horror romps like Cloverfield, Paranormal Activity, and The Blair Witch Project, even though it’s a sci-fi teen romance, not a horror film. The characters aren’t filming everything in the hopes they’ll catch a ghost on tape; they’re documenting their progress in an unlikely series of experiments vaulting between timelines.

David (Jonny Weston) is a 17-year-old science whiz who’s just gotten into MIT on a partial scholarship. He lives with his mom and twin sister, and spends most of his time building app-controlled drones with his two best friends. Rummaging around his attic in search of a project that will convince MIT to turn that partial scholarship into a full one, he comes across his dad’s old video camera. The tape inside contains some of the last moments of his dad’s life, filmed at David’s seventh birthday party.

Something’s weird about the tape. He plays it back with his sister Chris (Virginia Gardner), and they both see a figure flash across the mirror in their living room behind the festivities. They look closer, and it’s an image of David — 17-year-old David, lurking just behind the 7-year-old one.

Together with his undersexed pals Adam (Allen Evangelista) and Quinn (Sam Lerner), David finds his dad’s blueprints for a time machine in his basement. Before he died, his dad worked for the government on a time travel device known as Project Almanac, because apparently the government likes making Back to the Future 2 references in its top secret project code names. After some trial and error, and with the help of one of the cool seniors, Jessie (Sofia Black-D’Elia), the gang get the thing going. They can zap themselves back in time at will.

Things go wrong, of course, once David and his friends realize that they can not only visit the past, but change the present. At first they’re happy to go full Biff, manipulating time to get rich, become cool, and ace their classes. But the more they jump, the more they realize that their temporal tweaks have major consequences.

It takes them a long time to get there, though, and most of the film focuses on all of the fun they’re able to have as tempo-nauts. They don’t have much reason to visit the past, other than winning the lottery and going to last summer’s Lollapalooza to hang with Imagine Dragons and Atlas Genius (seriously). David doesn’t even seem that interested in saving his dad from the car crash that claimed his life. He’s worked fervently on a seemingly impossible science project, but why? Even that scholarship is quickly forgotten.

Of the five actors in the main cast, only Black-D’Elia is given much to work with. Jessie has a studied cool and a natural sarcasm, and her fondness for David and the gang evolves naturally. Adam and Quinn are textbook dorks leering at the hot girls, Christina plays the negging sister who records everything, and David’s two character traits are “smart” (he wears glasses) and “awkward” (sometimes he says the wrong thing). It’s an ensemble film that doesn’t give its ensemble much to do beyond the perpetual pursuit of “awesome.”

Littered with references to the classics of time travel, Project Almanac does come from a place of love for the genre. It covers thematic territory that’s been better articulated by Donnie Darko, and ultimately it ends up feeling a lot like a mashup between Doctor Who and That ’70s Show, with a dash of late ’90s music videos thrown in for good measure. While it’s a slick film with fun visuals, it ends up dragging its feet where it should be sprinting to the next plot point. But as a blueprint for newcomers to the time travel corner of sci-fi, it’ll work just fine.