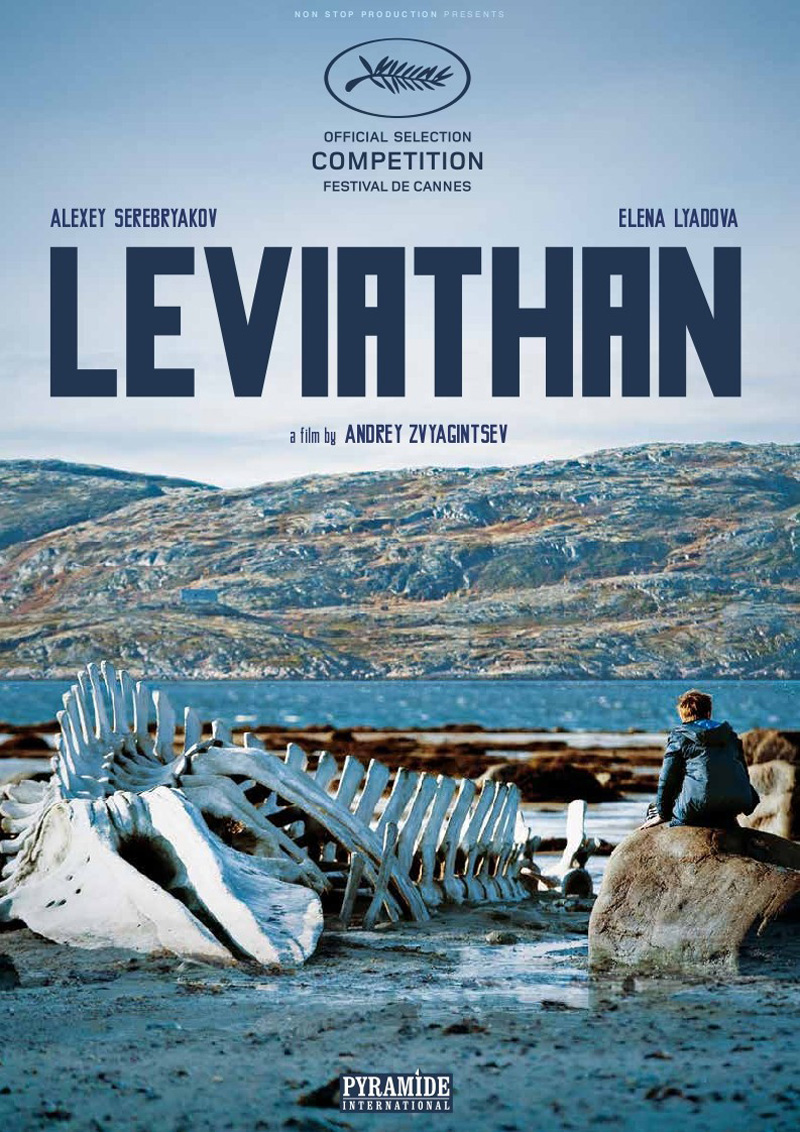 The mayor’s beyond angry. And drunk.

Vadim (Roman Madyanov, such an ugly presence that you can practically smell the liquor and feel the high blood pressure on him) is the corrupt and shameless mayor of a small peninsula by the Barents Sea, right off the northern coasts of Russia. It’s an eerie place, quiet and small. There are blue skies, gray landscapes, and whale skeletons littered about. But it’s simple and beautiful in its antiquated way. And it’s out of time. Anyway, Vadim shows up at a home, late, soused, cross-eyed, ready to fall over, and starts berating a local family.

“You people always make it hard.”

“You piece of shit. You have no rights, and you never will.” That last one is aimed at the father of the house that Vadim’s at — all of this hardly appropriate behavior for an elected official.

Vadim wants to tear down Nikolay’s (Aleksey Serebryakov) home, because the land has value. That’s where Vadim is tonight, and he just does not care what comes out of his mouth. He’s mad and impatient, good enough reasons as any to belittle a man and his family.

Nikolay won’t stand for being kicked out of his home and calls in a big Moscow lawyer, Dmitri (Vladimir Vdovichenkov). Nikolay’s lived on this land his whole life. How dare the mayor? This land belonged to Nikolay’s entire family lineage, and it’s all he has. And the mayor is clearly strong-arming Nikolay out of some sort of long-term spite. Out of greed. The whole situation becomes upsetting, fast. Nikolay’s lawyer has a wandering eye. Nikolay’s son is at teen-angst odds with his step-mother. Nikolay’s also drinking a lot, and his new wife is clearly bored and unhappy with their marriage. Everyone just seems unhappy, and the mayor is throwing gasoline on everything.

Leviathan is that kind of story: an exacting and bleak experience about the selfishness of power and how people act with self-interest, sadness, impulsiveness, or just make plain terrible choices when confronted with chaos. It is about an archaic place and about the loss of simplicity, and worse, purity. This isn’t a condemnation of the human condition but rather a startling and at times moving observation.

Despite its patient, long photography, Andrey Zvyagintsev’s Leviathan is not a subtle film. (It’s called Leviathan for God’s sake.) It’s a loose adaptation of The Book of Job, and it truly is about the monstrosities and suffering of everyday people. Nikolay suffers as he’s punished by a nasty and monstrous bureaucracy, one led by an angry, drunken “god” acting on whims. The state wants everything from Nikolay, and his friends and family keep betraying him or are on the verge of it. The story speaks to a very human and familiar nastiness. It doesn’t paint anyone as truly evil or shallow, just self-interested. It breaks your heart as you see how easy it is to test and destroy people. Nikolay’s tortured and tested until someone can destroy his house and everything that came with it. It’s almost poetic, really. Saddening too. One man’s legacy scheduled for razing, and there’s nearly nothing he can do about it.

Leviathan is almost reminiscent of Czech New Wave cinema. It possesses a naturalistic view of modern society in its native Russia and through its small scope takes on grand themes and ideas. It’s not obvious in its approach to one-man-against-the-universe, but you pick up on the film’s purpose before the end. When Nikolay and his friends go shooting, they opt to use framed portraits of past Russian presidents for target practice. It’s a mild reprieve, a cursing of past political gods (actually, it’s kind of a wonder that a film that could easily be considered anti-Putin got made in that country). No one gets hurt, but true to form, the scene ends in a spiritual tragedy.

Why Nikolay? Why? Because the mayor said so, that’s why. Through Nikolay’s suffering, we reach at something pure and deep and beautiful and depressing. In all its unrelenting bleakness, Leviathan is a commanding work.