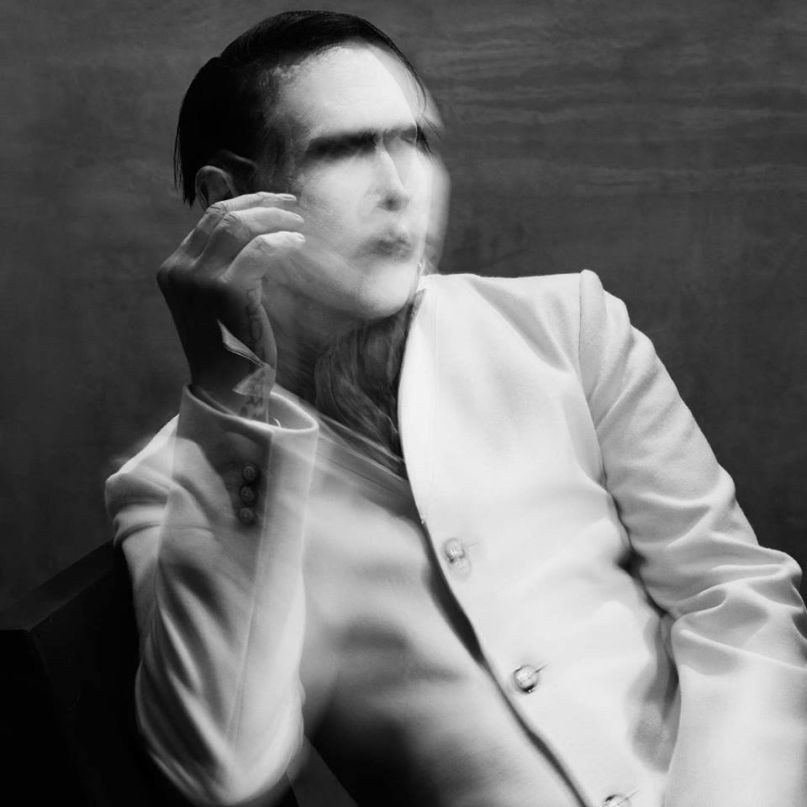 For fans, there is always a battle going on between Marilyn Manson, the group notorious for being accused of causing Columbine, and Brian Warner, the somber pontificator who urinates on fans but maintains intelligent conversation. To non-fans, they are the same person; over the past decade, Warner has tried to split the two in the public eye. Inevitably, the blurred edges that once worked in his favor continue to work against him. He’s a musician who only feels human around Johnny Depp, but he indulges the thrill of inviting Depp on stage with him. He disassociates himself from controversial video footage of Lana Del Rey and Eli Roth, but he can’t stop talking about it. Worse, even if the video didn’t come from Manson’s camp, the shock for shock’s sake could have; no one thought “Marilyn Manson would never do that.”

Where does the man end and the artist begin?

After a string of two questionable releases, Marilyn Manson was grasping at straws. He had gone from dark industrial icon to failed glam figure and then fumbled trying to make a dent with his return to industrial. His solution? Reveal just how fucked up the real human being is, mix the two sounds, and replace on-again-off-again collaborator Twiggy Ramirez with Tyler Bates, the composer behind Guardians of the Galaxy.

From the opening moments of The Pale Emperor, a title that echoes David Bowie’s “Thin White Duke” persona, you can feel Marilyn Manson’s human side trying to take off the mask. He plays into his own infamy — “We got guns, motherfuckers better run” — before turning it into a statement of who he really is: “We’re killing strangers so we don’t kill the ones that we love.” So many of the album’s lyrics work this way, as if Warner whipped up the first draft of lyrics by thinking “What would Marilyn Manson do?” and then turning the end around into what he would do. “They’ll never take me alive/ They’ll never fuckin’ take me alive,” he sings over simply programmed backing tracks on “The Devil Beneath My Feet”.

More so than past works, this album puts a faint coat of polish over the rust. Manson may have called the album dirty, “like the dirt under my nails, like someone who has dug a grave,” but all the mud and scum mixes in with the slick production. Sometimes it works glowingly; album closer “Odds of Even” is one of the strongest songs he’s written in years, and “Third Day of a Seven Day Binge” puts the best foot forward while stranded guitar eschews harmonics over a fat, funky bass line. Other times, the polish wears thin. About a third of the song titles read like what an uninformed mother would expect of Manson song titles: “Cupid Carries a Gun” and “Warship My Wreck” blur the lines between sounding familiar and beating predictability to a pulp.

A lack of “oomph” prevents the album from landing a gut punch that would cover all of its flaws. Like an aging boxer, Warner lands jabs and the occasional uppercut, but he never topples his opponent. He lands just enough blows to stay in the ring. But who is throwing the punches, Marilyn Manson or Brian Warner?

Warner avoids any association with Del Rey and says he was misquoted when he called her “a problem.” He talks about leaving his underwear on during sex and how he must do the deed five times a day but no more than ten. He reveals real mental disorders to try to explain how he’s boxed himself into the corner. After repeated listens, the two boxers blur: Brian Warner is Marilyn Manson, he just doesn’t want to be. Warner needs to be at the top, and the only way he knows is through the filth that turned off parents in the ’90s and made him iconic despite his flaws as both a hero and an anti-hero. In his own words, “Slave never dreams to be free/ Slave only dreams to be king.”

On “Odds of Even”, Manson sings, “This is the house of death where even angels die in the arms of demons.” Warner is trying to be the angel, trying to show he’s not as bad as advertised, trying to prove he isn’t evil. He’s showing regret for the cards he’s played before, all while trying to bluff the hand he has right now, still proud of his muck and glory. The character is fighting the man, trying to squash him. But then he shouts his final words: “No one is exempt from the odds of even.”

Not even Marilyn Manson.

Essential Tracks: “Third Day of a Seven Day Binge”, “Odds of Even”