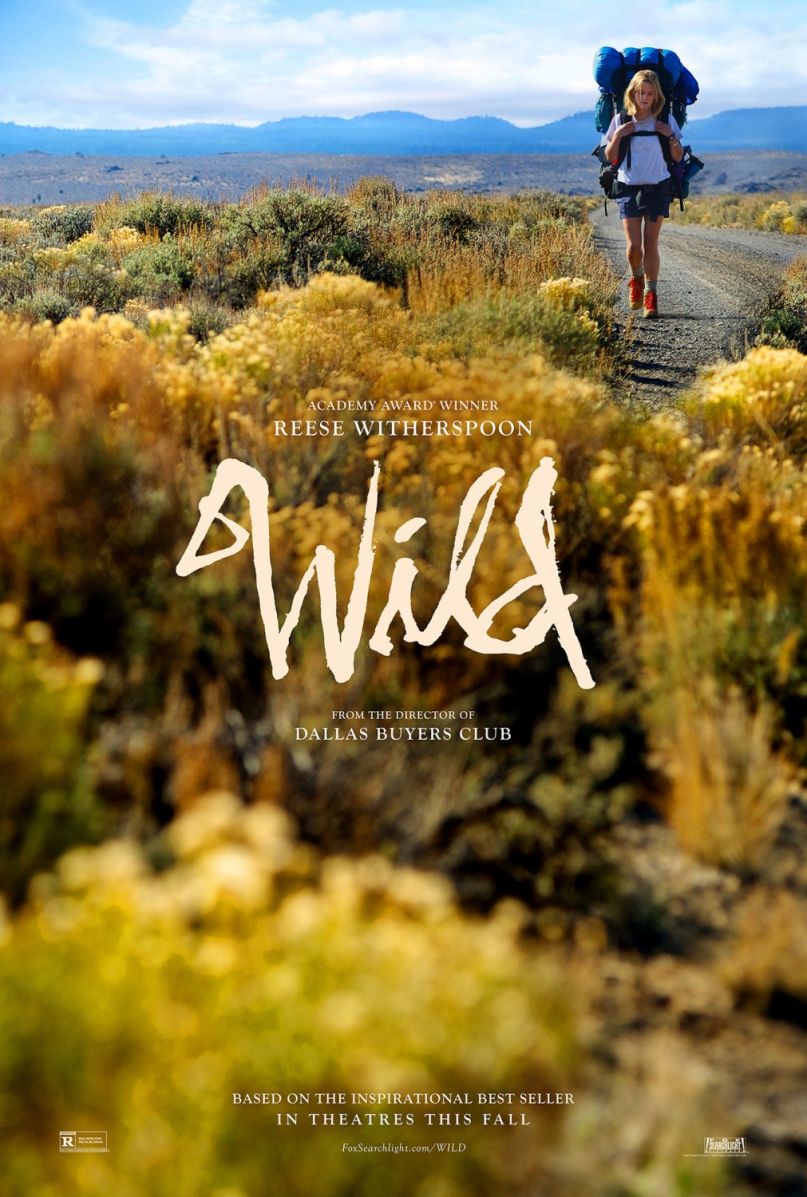 She’s stuck in her own head. It’s a 1000+ mile trip by foot in 1994, so what else is there to do? Cheryl Strayed (Reese Witherspoon) just up and decided to hike the Pacific Crest Trail. Yes, there are treacheries in the forms of venomous critters and dangerous stone formations and no engineered safeties for a person whatsoever, not to mention the prospect of sinister strangers in the middle of nowhere. Even Cheryl’s backpack might kill her at any time; it’s just so much bigger than her. The whole slog seems ludicrous the more you think about it. Seriously, what is there to think about when embarking on a giant, scary physical ordeal? “I’m going to rock?” “Come at me, nature?” “This will make for great photos and stories?” None of this, actually. Cheryl Strayed was honest with herself, as her head opened wide up to any and every thought:

Wild is loaded with whispers of voiceover, Strayed’s inner monologue. This makes absolute sense, not just from an adaptation standpoint (it’s a great way to cherry-pick the best lines from her memoir), but in the sense that Strayed was out there, in the wild, cleansing herself, clearing her head, primarily alone with her thoughts. Wild is less about dramatization, and more about rumination.

Taking the path more traveled, Wild is a somber and touching adaptation of Strayed’s memoir Wild: From Lost to Found on the Pacific Crest Trail. Depicted with empathy by director Jean-Marc Vallée, and carefully scripted by master humanist Nick Hornby, this is a biopic that goes out of its way in every sense, ignoring easy emotional catharses, big dramatic revelations, and shocking moments. With a showcase performance that invites you right into the inner life of a lost young woman, this very well may be the least sensational or sentimental biopic in ages.

Cheryl Strayed experienced a rocky path toward her eventual walk. She was fiercely independent, feminine, and intelligent. She was raised primarily by her mother, Bobbi (Laura Dern), an imperfect but strong figure who wanted very much to be everything to everyone. Bobbi’s passing broke Cheryl in many ways. Additionally, Strayed’s marriage devolved after seven years, and while the parting seemed amicable enough, her rampant drug use and infidelity during the relationship left all sorts of scars. She just needed to get away, to spend some time with herself. So, naturally, hiking to the point where toenails start needing to be ripped off seems like the perfect therapy.

Seriously, this isn’t a Walter Mitty yarn or a Tony Robbins empowerment seminar; it’s a chronicle of what goes on when someone picks up loads of baggage on the way to self-discovery. This is a great story in the form of an open travelogue. Strayed just keeps on walking, and talking, and the revelations about her past are gradually and patchily revealed with cross-cuts and momentary flashbacks. It’s a simple tactic, one that leads you to suspect that Vallée’s editing, along with Martin Pensa, was perhaps meant to break up any perceived monotony. However, it’s a willful and noticeable choice. How often do we think linearly? Vallée’s direction and stylistic decisions serve to help us understand Strayed, bit by bit, probably at the same speed as she did at the time. It’s Wild’s most beneficial characteristic.

Cheryl may feel bad about the things she’s done, but she never begs for forgiveness — she doesn’t need to. Not from the audience, not from herself. Is she atoning? Is she throwing everything away for a new start? Is something awful going to happen to her when she meets random men, or will she be able to overcome Aaron Ralston-like obstacles?  Yes, all around, but in subtle and genuinely unexpected ways. She’s figuring out the path, and we’re just privy to her breathtaking experience. There’s no grand tearjerker scene; Wild is total contemplation, beautifully represented as a constant plateau. The best Wild has to offer is a sense of total consciousness. Films this patient, or peaceful, seem to only come around in the late part of the year nowadays, but Strayed’s story is well told.

This is probably Witherspoon’s finest accomplishment as an actress. While she’s made a name with delightful comic performances in Election and Legally Blonde, and she won an Oscar for playing June Carter in Walk The Line, Wild offers her a chance to show off some grand range. Witherspoon has wonderful qualities as Strayed. She punishes her body. Watching her try to stand up under the weight of her own journey is comical, yet deliberate. Her red, patch-covered, cut and bruised body makes it a physical experience, and yet she endures, and comes out a stronger person. She exudes a nervous confidence, which even without the sensational backstory makes her universally relatable. Most people mean to do right, to be steadfast, but it’s just so hard. Witherspoon elicits Strayed a sort of beacon for every person that’s ever fallen astray. From the opening moments of her losing her shoes at high altitudes to Wild’s parting observations and soft wisdom, you’re with Cheryl Strayed every step of the way.