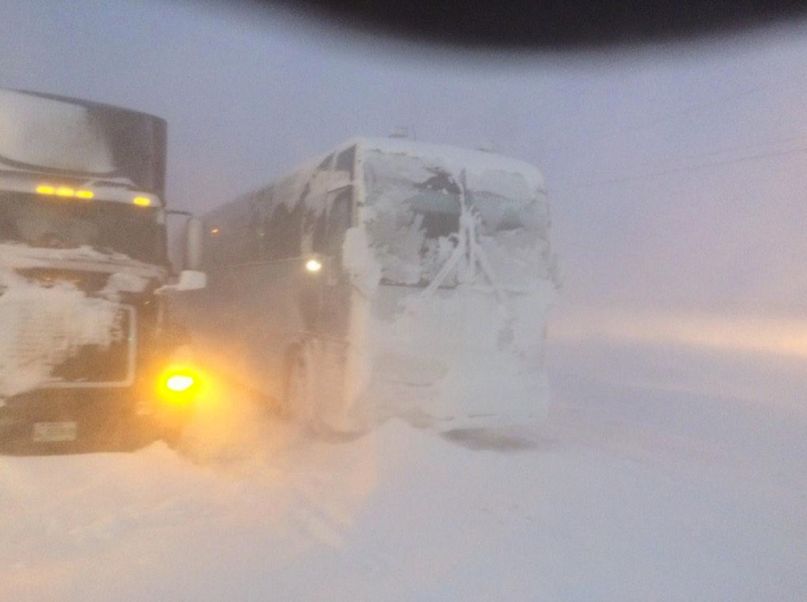 Seeing as how the entire country is currently in the midst of a deep freeze, chances are you’re wearing about 158,249 layers of clothing. Me? I’m in a down parka — whilst indoors, of course — cradling a mug of coffee like it’s my last hot liquid ration in this post-apocalyptic realm known as winter in the Northeast.

Still, as much as it pains me to walk across the tundra that is my tiled kitchen floor, the situation is about 100 times more dire for Interpol, who are caught in the icy grips of Buffalo, New York’s deadly and record-breaking blizzard. Walloped by blustery winds and besieged by upwards of 60-plus inches of snow, the indie rockers’ tour bus has been stuck in the same place for the last 30 hours. To put that number into perspective, that’s about 1,800 minutes (or, three full work days), 17 Interpol sets, 12 New York Knick games (where they presumably lose), and 32 full episodes of Game of Thrones.

The band were en route to Toronto, Ontario after playing in Columbus, Ohio on Monday night when Mother Nature struck with a vengeance. Interpol ended up canceling their Toronto show, and, since then, have been steadily documenting their November nightmare via Twitter. Suffice it to say, they’ve been handling the situation pretty well, thanks in part to dry food and plenty of tequila. Their next scheduled concert is November 20th in Montreal, Quebec.

Update 11/19, 5:15pm EST: More than 40 hours later, Interpol are still stranded and have announced the cancellation of their show in Montreal tomorrow night, saying they “still don’t know when we’ll be able to move from our current position.”

Update 11/20, 2:10pm EST: After briefly tasting the sweet nectar that is mobility, Interpol find themselves again squeezed by winter’s chokehold after a second wave of debilitating snow hit Buffalo. As the band were making their way toward the downtown area, they came face to face with a roadblock. So, if we’re keeping score here, that’s more than two full days spent battling this brutal weather system. At the very least, it looks as though frontman Paul Banks is using his time wisely. Wouldn’t that be great if they just emerged from the storm with a brand new album?

Below, check out some of Interpol’s tweets (in chronological order), and here’s hoping they’re able to get movin’ soon.

Unfortunately, we’ll have to cancel tonight’s concert Toronto due to snow… http://t.co/Sdhb7vTnSL pic.twitter.com/EoK9ee0vwl

#interpol #snowed in for the night! pic.twitter.com/DgKd1QXDsT

Hour 13 trapped in the snow. Dry goods and vodka. We will make it. -DK pic.twitter.com/bEQhaUokKi

Still trapped yo! Haven't really moved in 30 hours and we've been on the bus for nearly 40 hours. Nutso. Never seen anything like it.-DK

For kicks, here’s a look at that scary, jaw-dropping storm: