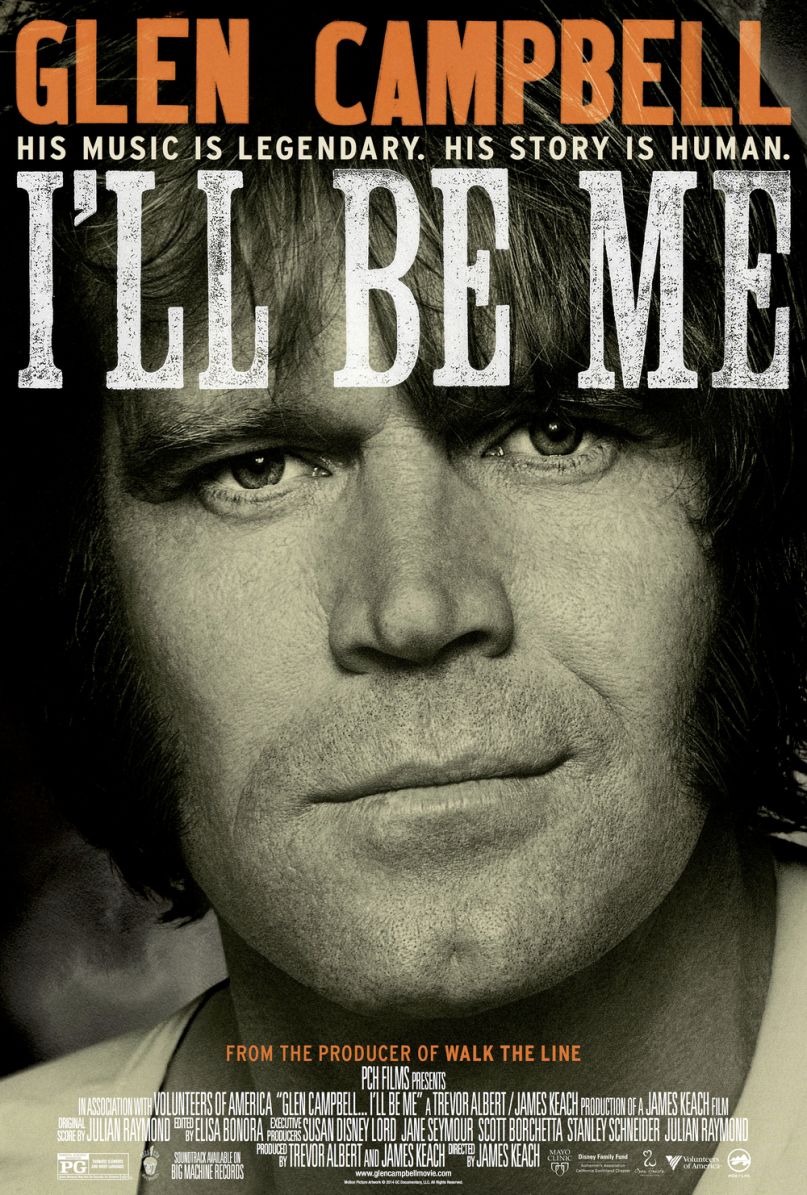 He doesn’t know what month it is. Doesn’t know the season. And doesn’t even realize he’s at the Mayo Clinic. He just doesn’t worry about things like that. In the first scenes of James Keach’s rip-your-whole-damn-heart-out documentary Glen Campbell: I’ll Be Me, Glen Campbell doesn’t know he has Alzheimer’s yet. He thinks his mind has simply been jettisoning the stuff he doesn’t need anymore. When the doctor asks him to remember and repeat four words (apple, Mr. Johnson, charity, tunnel), he immediately giggles them off. “I have no use for it now. I already passed it.” Then he says the truest words ever spoken: “I can play gee-tar.”

In 2005, I watched that Rhinestone Cowboy play the damned William Tell Overture on a freakin’ 12-string without breaking a sweat. He seemed immortal, a master showman firing on all cylinders who left the enraptured audience grinning from ear to ear. It was one of my favorite shows I’ve ever seen, a night where I would’ve thrown my panties at Glen if not for the polite elderly audience. And I’ll Be Me makes me even more grateful that I was there. Because it was one of the last times Glen was all there.

It’s not the life-story documentary you’d expect. Most of the biggest moments of Campbell’s career are capped up in a nifty opening credit sequence set to “Classical Gas”, and after that the film rarely looks back. Instead it’s a powerful testament to the strength of music, and a very, very painful study of a genius being disintegrated by a disease that often lends itself to punchlines. And there’s nothing funny about Alzheimer’s, but that doesn’t stop Glen from defying it through faith, unabashed goofiness, and a killer Donald Duck impression. As he says, “I have cried, and I have laughed. Laughter is a helluva lot better.”

Most people would stay out of the limelight when diagnosed with Alzheimer’s, but most people aren’t Glen Campbell. The only thing he knows how to do anymore is play. The talent is too just too deeply ingrained in the parts of his brain that haven’t shrunk, and it’s pretty much the only thing keeping him alive. That’s why the family, led by his extraordinarily devoted fourth wife, Kim, takes Glen out for his last big victory lap on “The Goodbye Tour.” The man can’t find his own bathroom, but he can still command the stage.

Most of I’ll Be Me is a tour film, following Glen, his longtime bandmates, and his three talented kids, as they try to go out on top. But you’ve never seen a tour film like this. You think Katy Perry had it tough with her non-stop tour in Part of Me? Try doing it while literally losing your mind. The movie is at its best during the tour sequences, as we see Glen becoming more and more incapable of making it through a show before the tour ends. And when the film gets to his final live performance, it’s a nerve-racking nail-biter that had me trembling and fighting back the tears. The same can be said of the scenes in which Glen drops his giddy guard and struggles to find the words to say how much he hates this disease. He makes us hate it, too. It’s devastating to hear this eternally cheerful man admit that he gets the blues. And it’s terrifying when he goes off his rocker, thinking there’s something stuck in his tooth and shoving a knife in his mouth to get it out.

As a salute to a musical master, I’ll Be Me does Glen Campbell justice. And as a rallying cry for the fight to end Alzheimer’s, it’s potent. But it falters a bit when that message gets repetitive; a sequence featuring John Boehner and Nancy Pelosi talking Alzheimer’s stops the movie cold. And for every great talking head extolling Glen’s genius (Bruce Springsteen, Vince Gill, Steve Martin), there’s too much blather from chumps such as Keith Urban, Chad Smith, and The Edge that pad the runtime. Still, there’s a lot of love in the film, both from the makers and its subject, that keeps it gentle on your mind. And if you haven’t gotten misty yet, the grand finale will do you in. You get to see and hear him record his final song, “I’m Not Gonna Miss You”. It’s a song nobody else could write, a elegant swan song to his wife and kids about how he’s about to forget who they ever were. Hell, I’m tearing up just thinking about it.