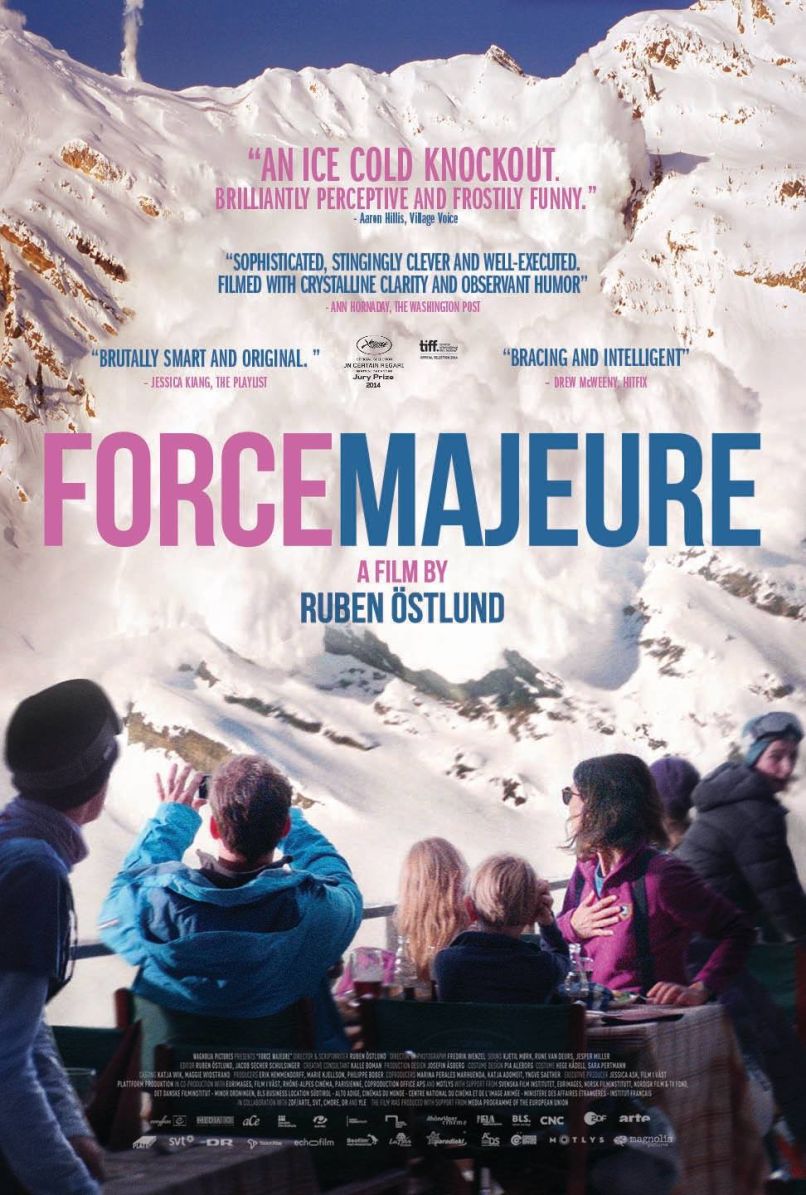 From its first moments, Force Majeure calls into question just how responsible you can hold people for the things they do when the flight response kicks in and they start to panic. It does this by establishing, in subtle strokes, two distinct details: the imposing power of the French mountains that surround Tomas (Johannes Kuhnke), Ebba (Lisa Loven Kongsli), and their children Vera (Clara Wettergren) and Harry (Vincent Wettergren) and the cracks in Tomas and Ebba’s marriage that already exist before everything rapidly goes to hell. When an overzealous, unseen photographer encourages the quasi-happy family to pair together in a series of increasingly ridiculous and elaborate tableaus, the overwhelming desire to not be touching each other, to not have to fake it for just a little while, is palpable.

And that’s before the avalanche, though in a sense it’s not the only one, or even the biggest on display. Force Majeure is at once a finely-honed dark comedy and a character study of a family in turmoil, all centered around one moment of terror that irreparably shifts the family dynamic. On the second day of their five-day family ski trip, they sit down to enjoy breakfast atop their lavish mountainside hotel. Occasionally, a pipe in the mountains emits a gunshot-like burst of snow, designed to control surface pressure. So when a small avalanche quickly turns into a much bigger one, Tomas simply calms his family, reminding them of how controlled it is. His calm gives way to Ebba’s panic, to a frightening scene of runaway tourists, and to Tomas grabbing his phone and gloves and speeding off, leaving Ebba and the children behind. They’re fine, physically; the actual avalanche stops before reaching the hotel, leaving a menacing but non-threatening whiteout in its wake that quickly gives way to the morning sunshine anew.

But Tomas’ panic hasn’t been forgotten, not by the children and least of all by Ebba, who’s now left to wonder exactly what kind of man she’s married to, and the unsettling scenario of what would have happened if the avalanche hadn’t stopped. Writer-director Ruben Östlund centers the film around the echoes of this incident and what it exposes in Tomas and Ebba’s already fraught interactions with one another. The film works in quiet strokes, the early idyllic scenes of relative domestic contentment (ones peppered with Tomas’ insistences that Ebba rouse herself from sleep to get the phone, or hers that he actually be present during family vacation) giving way to uncertainty, fear, and the unshakeable knowledge that what’s been done can never be fully undone.

The film depends heavily on its leading foursome, and the performances are great across the board, but the standout is Kongsli’s as Ebba, who’s already clearly struggling with the pressures of middle age and her ascribed role as mother, provider, and precious little else even before Tomas unwittingly justifies her growing doubts about their marriage. In one conversation-turned-argument with a more liberalized fellow vacationer/mother, Ebba grows increasingly agitated by the notion that other women her age still get to enjoy their sexuality and independence as autonomous human beings, while she bickers with Tomas over lavish ski trips that nevertheless leave her with a growing pit in her stomach. This is integral to Force Majeure’s perspective of marriage; as was the case in Gone Girl, Ebba and Tomas are just as frustrated with the roles they’ve been assigned by society as they are with one another.

Their frustrations begin to spiral in numerous directions. Harry worries that they’re on the brink of divorce as Vera grows ever more withdrawn out of her anger at having to protect her brother. Their friend Mats (Kristofer Hivju) and his decades-younger girlfriend Fanny (Fanni Metelius) offer a momentary reprieve from the events of that fateful morning, but are roped into the same fears, leading to Fanny developing parallel anxieties about her divorced lover and who he might be. After all, if the consummately perfect family on a ski holiday can’t keep it together, who can? Östlund and Force Majeure are less interested in answering this question and the many others it raises about the modern nuclear family in times of implosion than it is in exploring them with a careful eye, one that avoids judgment or simplistic resolution. The family has problems, and they’ve existed long before those first loving pictures were taken, but eventually the issue is less about having to crowd together for an awkward picture than it’s whether they’ll ever be able to convincingly fake those smiles again.

All of this unfolds against a harsh winter landscape, one of which Östlund takes full advantage. The sense of impending doom hangs heavy over the film right through its final scenes, and even when the film lightens up, it’s always with a bitter aftertaste quickly following. (One later sequence, concerning a family meeting in their hotel room, is an escalating masterpiece of embarrassment, poignance, and visual hilarity all at once. It’s as excruciating as it is perfect in context of all that precedes it.) The grand opulence of their distractingly symmetrical hotel and the unsullied mountains in every direction is one of Force Majeure’s biggest punchlines, one that it returns to frequently without ever overplaying the film’s skewed sense of family unity in the face of Tomas’ struggles with his diminished patriarchal authority. He might’ve screwed up, but he’s still a man. What Force Majeure considers, eloquently and often, is what that really means, and most of all, how much it really means, in the grand scheme of their lives.