Film Review: Beyond The Lights 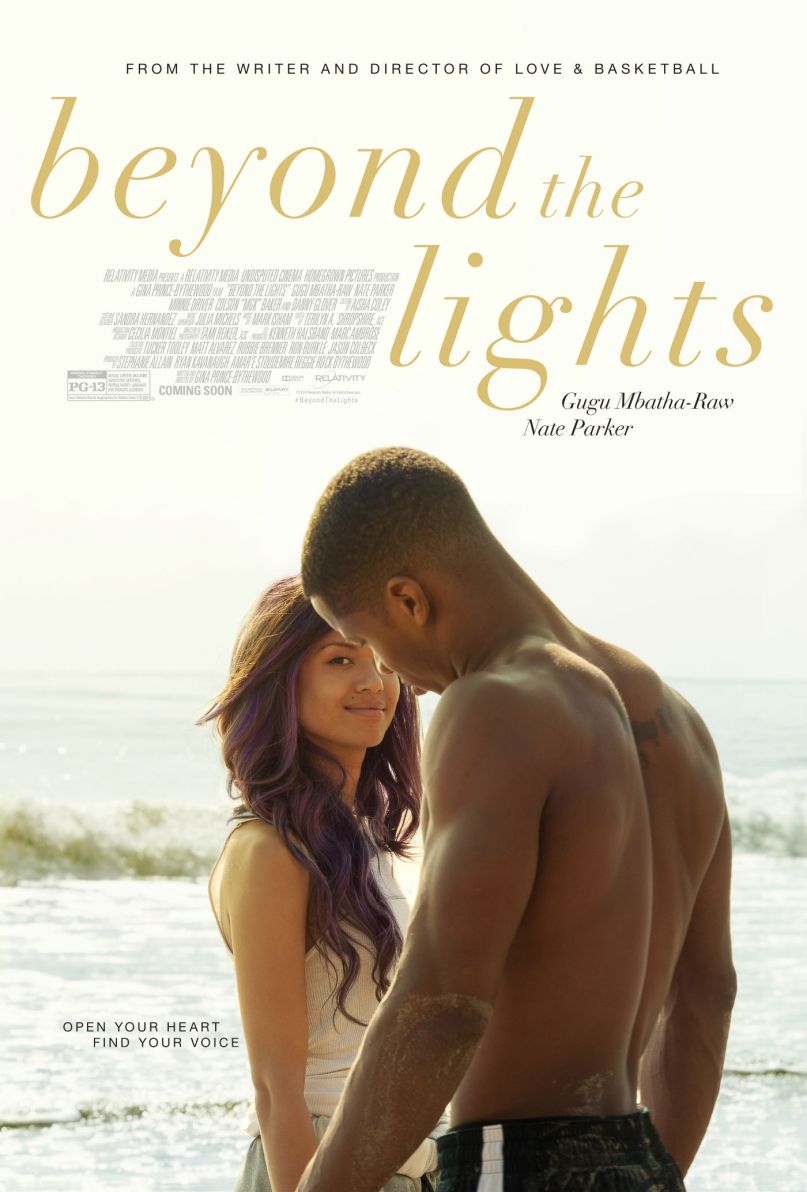 Echoes of The Bodyguard inform Beyond the Lights. It’s an only-in-Hollywood romance about star-crossed lovers from separate worlds. This time, the superstar is Noni (Gugu Mbatha-Raw), an up-and-coming singer who turns heads with a provocative media presence in the vein of Lady Gaga or Rihanna or whoever showed up to the VMAs this year. Her security is Kaz (Nate Parker), a soft-spoken, kind, disciplined, occasionally shirtless young police officer. However, don’t let the film’s BET Productions label fool you. This may look like another traditional movie of the week with an attractive African American cast, but there is more

Noni has some issues. She has the aspirations of becoming the next Nina Simone, but she’s taken the easy road to stardom through pop music and sleazy objectification — a legitimate and tangible issue that continues to plague today’s music industry. Early in the film, the depressed singer tries to commit suicide following an awards show by jumping off the balcony of her L.A. hotel room. Naturally, Kaz is on the scene, saves the day, and is vaunted as a hero, as the media spins the story into a drunken accident. Soon after, the two care for each other, and are tested by commitments (family, duty, executives, constituents, so much drama for these two). From there it’s obvious: a daring rescue, a whirlwind romance, and you should stop giggling now.

Despite this Hallmark-grade premise, Gina Prince-Bythewood’s Beyond the Lights is a tender, mindful, and soulful film that offers a modern take on a stale romance, all on the strength of two attractive yet sympathetic leads. The musical Romeo and Juliet-style drama is very specifically West Coast industry-based, with shades of Sofia Coppola, Dreamgirls, and again, The Bodyguard. However, it marches to a different tune. Kaz may be a hunky savior, but it’s consensually intimate, lacking in the usual alpha male crap. Maybe he’s amusingly sensitive, but he cares. Noni, on the other hand, commits to the “maligned artist desperate to break free” cliche.

Every artist struggles with self-expression, and Lights kind of pummels Noni. To abruptly cut from her as a little girl singing Simone’s “Blackbird” to her presently exposing herself in leather straps for some god-awful Hype Williams concoction … there’s zero tact there. But it’s still interesting, and Bythewood nails the emotional devastation one might feel in her shoes — that is, her likely expensive and painful record company high-heeled shoes.

Beyond the Lights distinguishes itself by letting its emotions run deep. Mbatha-Raw and Parker feel like fresh faces, ready to bring everything they’ve got. The former made a nice name for herself this past spring in Belle, and she’s ready for a big breakout role. As Noni, she does something incredibly hard: make you sympathize with her. It’s so easy to belittle our celebrities. We assume they crave attention, and resent them for their cushy status for questionable efforts.

It’s not quite like that with Noni; she’s a beautiful and talented young person, and you hope she finds what she’s looking for. Parker, who will be treated as eye candy (if the hooting and hollering at last week’s screening were any indication), has the chops to be a leading man. His smoky and comforting voice, his ability to express doubt and strength simultaneously, all of it makes Kaz a better and more interesting character.

Wait, we didn’t even talk about the corny Mexican beach love scene and the distracting cross-promotional aspects, and … you know what? Watch Beyond the Lights with a knowing smirk. That’s fine. Just keep an eye on the shining leads. It’s hard not to in all honesty.