Tears for Fears – Songs from the Big Chair [Reissue] 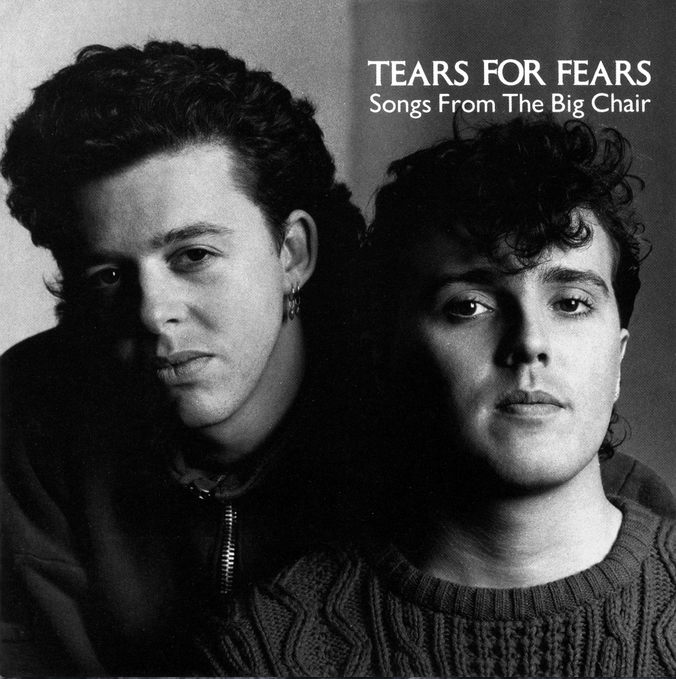 Great things often happen in curious ways. Stephen King’s Carrie only saw the light of day because his wife Tabitha picked the manuscript out of the trash. Han Solo’s “I know” to Princess Leia’s “I love you” was pure gut instinct on behalf of Harrison Ford. While Tears for Fears’ 1985 single “Everybody Wants to Rule the World” was a last-minute addition to their iconic sophomore album, Songs from the Big Chair, all thanks to two chords co-founder Roland Orzabal randomly played on his acoustic guitar for producer Chris Hughes. As the band’s other half, Curt Smith, explains in an interview on this reissue: “I came in one day, and they’d actually written this song around this beat and it was very commercial, so they said, ‘Here it is, you’re singing it, go and do it.’ So I did.” Easy come, easy go, right?

It’s the sort of mind-bending folklore that chaos theoreticians might get off on. Or, as Hughes once admitted to Mix magazine, “…as a piece of recording history, it’s bland as hell.” Not really, though. The way their minimal effort produced such a timeless and influential composition like “Everybody Wants to Rule the World” only adds to the song’s majesty. As a single for 1985, the UK outfit couldn’t have written a track more apropos for the times; it’s a meditative commentary on an era that was so corrupt economically and spiritually. “So glad we’ve almost made it/ So sad they had to fade it,” Smith wails in a tenor that’s equal parts nihilistic and tragic. Who knew three decades later that those same words would speak even louder? But they do, though a lot of that success is due in part to the song’s musical innocence, specifically its irregular tempo.

“The shuffle beat was alien to our normal way of doing things,” Orzabal explained. “It was jolly rather than square and rigid in the manner of ‘Shout’, but it continued the process of becoming more extrovert.” That last part sheds light on the real source of inspiration for “Everybody…”, and it traces back to the complicated DNA of Songs from the Big Chair. At eight tracks and 41:19, it’s technically a leaner album than their 1983 debut, The Hurting, but only by a shy 20 seconds. What’s extraordinary, then, is how Songs actually feels more expansive and sprawling and adventurous despite the band yearning to be commercial.

Much of that experimentation started with their 1983 single, “The Way You Are”, a buffer between two albums whose sole purpose was to keep Tears for Fears in the public eye. “Probably one of the worst recordings I think we’ve done,” Smith admitted to us last week, explaining that they “were basically coerced by the record company to go in and do something to release quickly after The Hurting was successful.” Though the production of the single strayed from their atypical style of writing — “what we prefer to do is just go away and make our own records” — it certainly sparked something within them.

(Interview: Curt Smith: Back in the Big Chair)

What came next was a continuation of their rare brand of R&B, in addition to an avant-garde interest in sampling, courtesy of the then state-of-the-art Fairlight CMi-2, an instrument that no doubt assisted in evolving their new wave sound. Case in point: First single “Mothers Talk” lifted strings from a Barry Manilow record, used James Brown vocal snippets, and plugged in other organic ambient noises. And, technically, they sampled their own live recording of “Broken” by tailoring it after other juggernaut single “Head Over Heels”, which acted as a curious bookend to the studio version that preceded “Heels”.

It’s this quirky manipulation that makes the album such a statement, not only about the band but about music being released around that time. In addition to synthesizers and MIDI programming, sampling was fairly new for popular music, and such sonic tinkering pushed Tears for Fears ahead of their colleagues, elevating the outfit as a legitimate forerunner of pop music. This sharp foresight also propelled the songs far past the crazy ’80s, instead becoming essential anthems for generations yet to come. Their worldwide hit “Shout” has been covered and remixed to death, while last year, Lorde delivered a spin on “Everybody…” for the Hunger Games soundtrack.

Much of that influence stems from the album’s stark poetry. Lyrically, Songs from the Big Chair remains their most focused effort to date, right down to its emblematic title. Inspired by the book and mini-series Sybill, about a woman with multiple personality disorder who finds comfort in the “Big Chair,” the title was “kind of an ‘up yours’ to the English music press who really fucked [the band] up for a while,” as Smith explained: “This is us now — and they can’t get at us anymore.” As such, the album touches upon their surroundings, from dusty Cold War paranoia (“Shout”) to the corruption of power (“Everybody Wants to Rule the World”) to parental guidance (“Mothers Talk”) to the uncontrollable emotions that romance warrants (“Head Over Heels”). In keeping with its titular themes, “The Working Hour” and “Listen” play to the modes of therapy.

But what’s really compelling about Songs from the Big Chair is how Tears for Fears were able to stack not one, not two, but three divine tracks under one roof. These aren’t just great songs, but some of the most important tracks to ever surface in mainstream pop. It would have been impressive if they penned these anthems over a decade, but they somehow managed to sequester themselves into a creative arc to produce these top-level compositions, which goes back to great things happening in curious ways. With Tears for Fears, it would appear that there was some sort of spiritual ignition prior to their 1984 arrival at Wool Hall Studios. Maybe it was re-teaming with Hughes, or perhaps it really was the irritable English press, but whatever pushed them woke up something fierce.

That spirit is alive in this reissue’s collection of B-sides, live performances, remixes, and demos, all curated by the band no less. It’s not always essential, but each track feels like a jagged piece of an eccentric puzzle that will never see completion. But that’s the beauty of an album as complete as Songs from the Big Chair. After all, we don’t always have to question why things are great; we just have to acknowledge they exist. So, act accordingly.