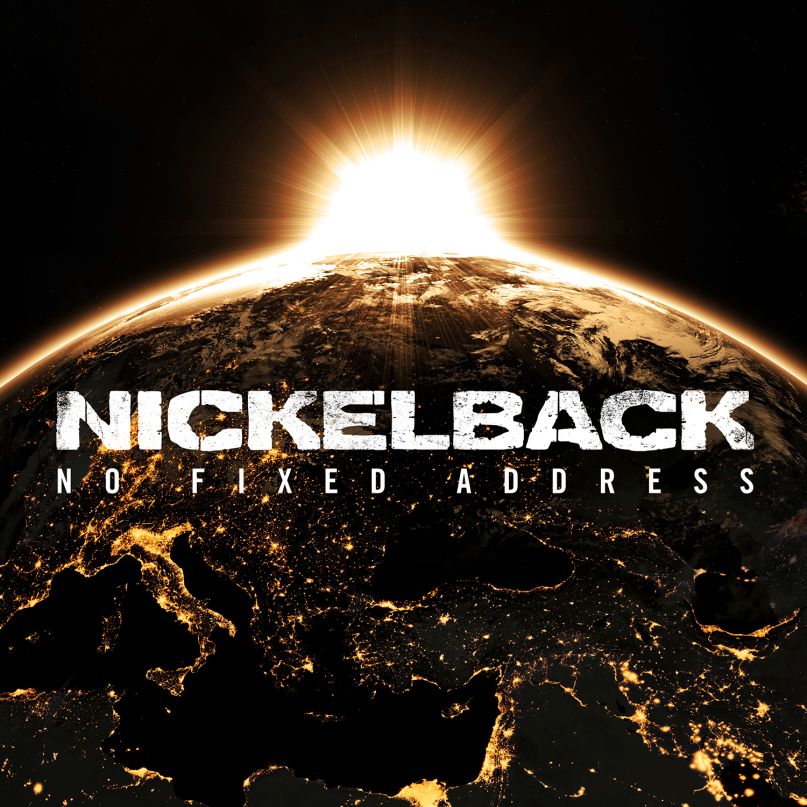 Why did Nickelback become Nickelback? This question is perpetually hard to answer from a critical perspective. Is there really anything inherently worse about the Canadian rockers than their peers Three Doors Down, P.O.D., or Daughtry? Probably not. But even as some critics warm up to them with time, Nickelback have found a way to remain the one band that everyone shits on. They still have the reputation of a one-trick-pony that rewrites the same hit over and over despite the fact that they’ve been changing their sound since, at the latest, 2007.

When it comes to No Fixed Address, Nickelback are acceptable. If you removed the terrible lyrics and the even worse singles, some people who berate Nickelback would openly love this album without a fear of being disowned by their friends. At its core, Nickelback’s new album is one almost anyone could enjoy if they wanted to. There are also things here that no one should ever like.

“What Are You Waiting For” sounds like a Corona-core country song written by Jimmy Buffett and covered by the worst DJ you’ve ever heard. It’s almost unlistenable to a serious music fan, but that’s why it works as a radio single; surely, there are people in clubs who dance to this and enjoy singing along to lines like “Everybody needs a leap of faith/ When are you taking yours?/ What are you waiting for?” The song’s production is torturously annoying: A squish effect pans from the left to the right channel, an a cappella swell hits at the most “meaningful” moment, and a bass drum fill finishes the thing. It feels like Nickelback have been poring over Dance Music for Dummies.

Yet not all of this album, a slickly produced mixture of club dance and cock rock, is … bad, exactly. Flo Rida shows up for a funk number with a horn section called “Got Me Runnin’ Round”. If it appeared on a Red Hot Chili Peppers album, people would say they were returning to their funk roots with a psychedelic beat. The meaningless, over-sexed pseudo-poetry that Chad Kroeger spews would be viewed as harmless and, to some people, charming. Because it’s Nickelback, the instinct is to dislike it, and that’s too bad. The song is like candy: Sweet, fattening, lacking in nutritional value, and something that should be kept away from children. But it’s a solid jam, with stylish percussion, a trumpet part, soul backing vocals that are cheesy in the most entertaining way possible, and a verse that makes Flo Rida in 2014 sound like Nelly in 2000.

“She Keeps Me Up” has funky guitar that, isolated, would make anyone dance; even with Kroeger’s macho drawl over the beat, it’s still a song you’d be hard-pressed not to nod along to on any given listen. “Get ‘Em Up” is difficult to resist as a heavier rock song. The doubled guitar and simple beat give its riff a deep edge, like something that would roll over the ending credits to an action movie — but, like most songs on the album, the song’s content is damn near worthless. There’s just no way a song about stealing a Mustang and robbing a bank, with lyrics like “This is a robbery/ Get down on the floor,” doesn’t feel like a contrived story written by men wholly full of themselves trying to look “badass.”

In between the terrible songs and the actually pretty good ones is most of the album: total filler. Though only 11 tracks long, No Fixed Address feels rushed and half-hearted. While this is somewhat common for radio rock bands, it’s unusual in that there isn’t a line of weak tracks preceded by a line of good ones. It’s hard to spot two songs in a row that flow together anywhere.

Most of the album ends up being totally unmemorable. Haters may find this redemptive for Nickelback — it’s almost entirely tolerable. Fans may find this destructive, as it could indicate the band isn’t doing their best to be themselves as musicians and songwriters. After all, if you don’t taste a distinctive flavor, is it even worth swallowing? Songs like “Miss You” are clearly included for older fans; they’re essentially the old Nickelback song-and-dance people have come to know and love (or hate) since their first appearance on the top 40, only with the production style of every other top 40 artist in 2014.

If you’re a Nickelback fan, No Fixed Address could be their strongest album in years. If you’re not, you’re probably not about to step up and say Nickelback is a great band — but isolate the music from your preconceptions, and it’ll be a fine ride, even if your friends shun you for it. Deep down, underneath all those layers of negative imagery (Canadians! Kurt Cobain led to this! Married to celebrities! Divorced from celebrities!), No Fixed Address serves as a strong, living reminder that things are rarely as bad as they seem.

Essential Tracks: “She Keeps Me Up”, “Get Em Up”