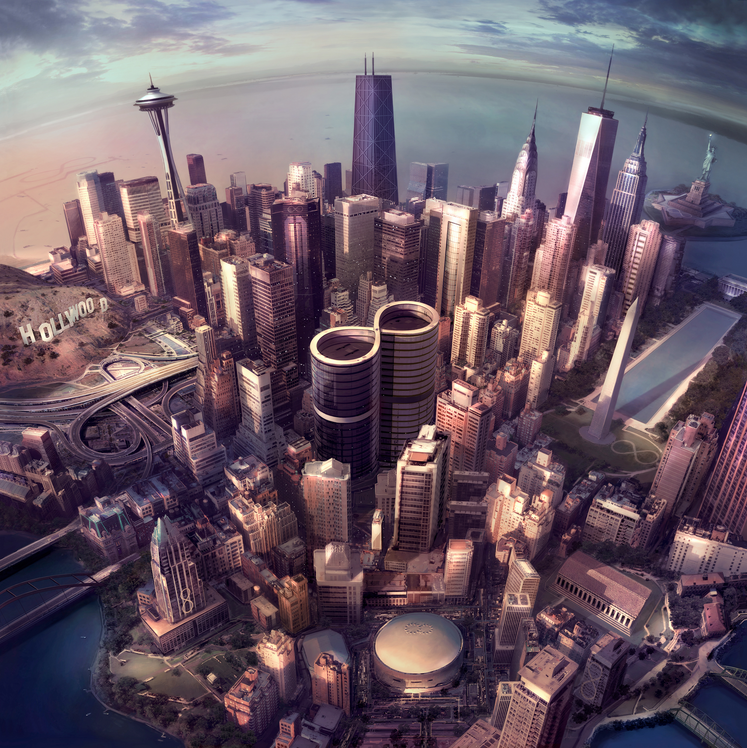 The story of Sonic Highways is both admirable and flawed in its conception. Foo Fighters, now nearing 20 years into their career as a rock band, decide to push themselves in new directions, traveling to eight American cities, recording with local legends in famed studios, leaving Dave Grohl to wait until the last minute to write the lyrics for each song, so as to be inspired by the surroundings, the experience. Foo Fighters wanted to make things new again, but something was lost along the way — their identity.

Though we are only three episodes into the excellent documentary series of the same name airing on HBO, Foo Fighters’ identity and their place in the fabric of American music history should never be in question. Dave Grohl was the fucking drummer of Nirvana. Foo Fighters can play stadiums around the world, packing their sets with songs that are simply a part of our collective consciousness at this point. Prince covered them at the Super Bowl.

Eric Harvey’s quite good essay on Sonic Highways points out that the album and documentary attempts to write the band into the musical canon, but this point is slightly off, as the band didn’t really need help being placed among their heroes. The documentary only illuminates their place, it doesn’t fabricate it.

Harvey also points out that Grohl takes this concept a step too far, and that, unfortunately, sinks the album in the same way it elevates the HBO series. It’s in Grohl’s lyrics that the concept frays, his assumption that he is a talented enough lyricist to whip out a memorable turn-of-phrase with unmasked historical references at the moment he is demanded. Frankly, he isn’t.

Grohl has never been a poet of a songwriter, with his best songs (“Everlong”, “Best of You”, “The Pretender”, “My Hero”, so many more) finding success in emotional honesty and urgency, in saying something simple in a plain-spoken, believable way.

On Sonic Highways, the references to Muddy Waters on “Something from Nothing” or the Bluebird Cafe on the album’s best track, “Congregation”, are more forced and distracting than inspired. Other lyrics are worse, like “beautiful earthling, blessed in cashmere” on the L.A. song, “Outside”. That track manages to capture some of the essence of the West Coast city, but the details of “canyons” and “sirens” seem hollow, lack insight, and reek of lyrics that were hammered out on instinct, not careful consideration.

This kind of a songwriting experiment keeps the Sonic Highways album from being essential listening. It’s more of a failed experiment, a diversion from a real Foo Fighters album. The band’s previous concept album, 2005’s electric/acoustic double-album, In Your Honor, didn’t suffer the same fate because the band stuck to the processes that have worked for them in the past. They revised, they sweated, they worked. They didn’t require inspiration to happen on their own specific deadline. They didn’t expect songs to be written on the spot and fit neatly in the Foo Fighters strong discography.

That isn’t to say that lyrics are the only problem with Sonic Highways or that the album’s a complete drag musically. “Something from Nothing” finds thrills in details, like the squealing feedback that the documentary reveals takes three people, including producer Butch Vig and the band’s resident shredder Chris Shiflett, to pull off. The brass section from the Preservation Hall Jazz Band on New Orleans’ contribution, “In the Clear”, gives the album a jolt of excitement, providing an easily audible distinction from the other collaborations. In the documentary, when Cheap Trick’s Rick Nielsen is asked to play guitar on “Something from Nothing”, he asks if they really need another guitar (as the band already has three and a bass). Guess what, they didn’t, but it was part of the project to have guests on each song, so that is exactly what each song has, whether it needs them or not.

And this is the folly for a concept album, one that demands a strict system to come to fruition, whether it benefits the music or not. A single listen to 2011’s Wasting Light reveals not only a more refined album, but a band accepting all parts of their identity, from the punk to the classic rock to the beautiful. The only song that attempts beauty on Sonic Highways comes at the end with “I Am a River”, a heavy-handed grab at the heartstrings, which is particularly jarring since Grohl and co. typically show such delicate taste when they decide to let their pretty side shine. Emotions aren’t requested; they are demanded. “Congregation”, on the other hand, actually achieves some success in this area though it tears away every chance it gets. Grohl’s voice sounds smooth and soulful when he sings, “I’ve been throwing knives to see just where they land,” only to be wiped away with his trademark scream seconds later.

That knives line is an easy parallel for the album as a whole. And, if we consider the documentary a knife as well, then the HBO series is a bullseye, a shot to the heart, the eye, the ear, and the brain. It’s a direct hit and everything a music fan would want from a virtual rock and roll road trip across America. The press release for Sonic Highways is careful to mention that it is not a soundtrack album, and that’s true, as the documentary features so much more music than just Foo Fighters. Instead, the album plays out more like a bonus feature, something that can enhance the series’ enjoyment or simply further inform the experience, similar to last year’s accompanying album for Sound City. On its own, however, Sonic Highways is the most glaring musical misstep in their career. But, as its creation makes the documentary possible, and will make another round of crowd-pleasing massive tours possible, is it worth it? Absolutely.

Essential Tracks: “Congregation”, “In the Clear”