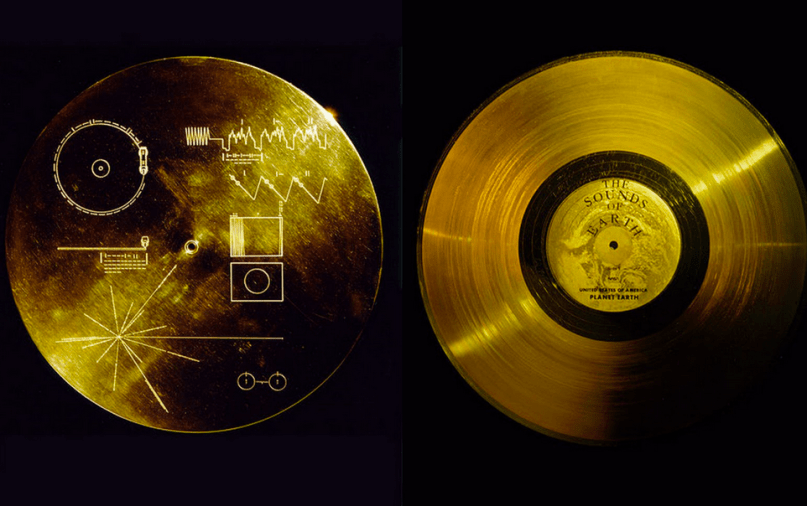 We already know that space generates its own deeply beautiful music. But back in 1977, as mankind thought about its place amongst the stars and the possibility of extraterrestrial life, NASA decided to add to the cosmic symphony with the launch of the Voyager I probe. There among all the radio gear and high-end cameras is The Golden Record, a disc containing a ginormous auditory archive representing our planet’s menagerie of sounds (via Death and Taxes).

From music to greetings in every language and even sorted animal grunts, the disc was created as a means of communicating with alien life, unseen individuals who are “coming to grips with the same laws of physics and chemistry and astronomy,” wrote project head and famed astronomer Carl Sagan. He added, “The greatest interest might be in communicating information on music, say, or social conventions.”

Musically, the bulk of the disc is comprised of European classical and World music, with just three songs from Western culture: Chuck Berry’s “Johnny B. Goode”, “Melancholy Blues” by Louis Armstrong, and the blues standard “Dark Was the Night”. Sure, it’s missing profound songs that were released at that time, and there’s been a billion more songs released since Voyager’s launch. Still, the Golden Record remains a romantic representation of Earth reaching out with our most powerful agent, music, and hoping someone reaches back. On the plus side, at least there isn’t any Skrillex.

Here’s the truly moving introduction message from the disc.

And here’s the disc’s playlist.