by Michael Roffman and Randall Colburn 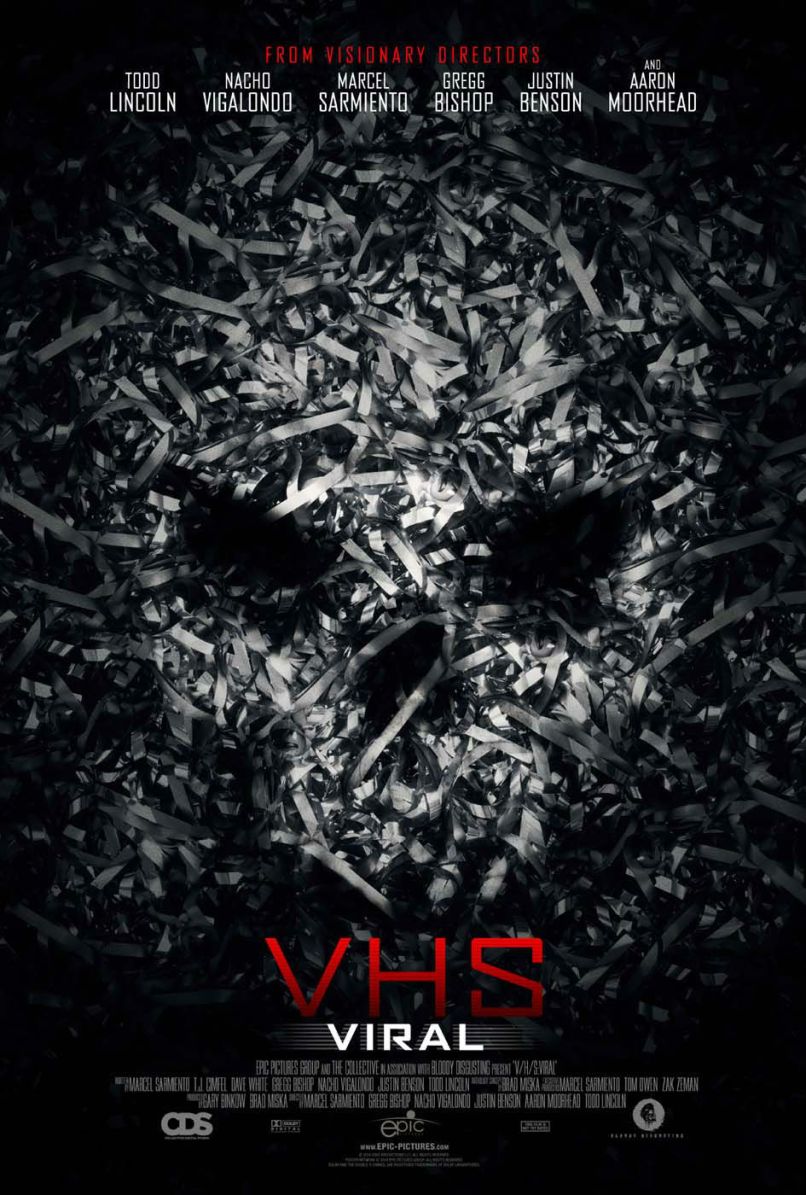 Michael Roffman (MR): Whether or not you dig the found footage genre, you have to appreciate the caliber of talent that the V/H/S anthology series has attracted. Over the past two years, we’ve seen short films by Adam Wingard (You’re Next), Eduardo Sánchez (The Blair Witch Project), Ti West (House of the Devil), and Joe Swanberg (Hannah Takes the Stairs), who have all flexed their respective talent with the format. While some of them have been disappointing, to say the least, a handful of gems are typically found in each installment, making this series an essential annual viewing for horror fanatics everywhere. The latest entry, V/H/S Viral, keeps that tradition alive, and although it’s by far the weakest of the three, there are some genuinely creative moments that spark the brain and fry the hairs.

Randall, last week you championed the found footage genre a little while writing about 2007’s [REC], arguing that “the first-person perspective is often thrilling, and the traditionally low budgets result in an embrace of minimalism, of ambiguity, of the glimpse – almost always more effective than prolonged exposure.” I feel that all three V/H/S films have supported that thesis. Even if each short didn’t succeed in being frightening, or if their narratives were a mess, or the acting was just downright awful, they always seem to work off a truly creative idea, which is something that horror’s been starved of for years. Sure, we’ve seen haunted houses, possessions, or cults, but to each director’s credit, they somehow find a spin on each trope, which is something I have to respect.

Randall Colburn (RC): That glimpse. I’m telling you, it’s key. It’s been proven again and again that horror is directly proportionate to demystification: the more you explain, the less you scare. When I wrote the aforementioned thesis, I pondered on several moments from the first two V/H/S series: the winged woman in “Amateur Night”, the grasping arms of “10/31/98”, the underwater creature in “Slumber Party Alien Abduction”. What these all have in common is restraint, the ability to tease a world that’s so much larger than the forced perspective of our protagonists. The V/H/S films, and found footage in general, benefit from this understanding: you don’t have to explain everything, because, from our fixed perspective, we can’t see everything.

V/H/S: Viral suffers most when it distrusts that perspective. That’s what causes too many segments in this movie to overstuff themselves with cameras; there are times when it seems everyone in this world walks around with a GoPro strapped to their head. One could argue that this lends itself to the film’s satire — hypocritical and passé as it may be — and perhaps it does. But the endless shifts in perspective go a long way towards demystification and utter incoherence. It’s no surprise that the best short in this anthology, Nacho Vigalondo’s “Parallel Monsters”, limits its perspective to one man — well, sorta.

And thank god for “Parallel Monsters”, not just the best entry in this sequel, but a standout in the series as a whole. Without it (and, to a lesser extent, Justin Benson and Aaron Moorhead’s “Bonestorm”), it would be impossible to recommend V/H/S: Viral. Gregg Bishop’s “Dante the Great”, for one, is a tonal mess that’s hard to even classify as a found footage film, a fact I’d probably disregard if it was entertaining. But the true offender is “Vicious Circles”, the anthology’s connective tissue. V/H/S‘s wrap-around segments have long been the series’ weakest link, but this one takes the cake.

Mike, care to elaborate? Since they’re not content to function as straight anthologies, what are the V/H/S films ultimately trying to say?

MR: Well, based on the moral bludgeoning at the end of “Vicious Circles”, it would appear that V/H/S Viral wants to be a condemnation on our collective obsession with startling and controversial media. What an old and tired message that accomplishes next to nothing. What’s the point? Are they tying to upgrade the age-old commentary of slasher films that sex, drugs, and rock ‘n’ roll lead to death, death, and death? It’s baffling that an anthology series would go so far to adopt any sort of morality lesson outside of being a buffer between short films. Do they really think anyone’s going to watch this and say, “You know, we do have a problem, guys.” Of course not.

You’re right that the connective tissue has always been the weakest link of V/H/S. From the get-go, I never understood why the producers didn’t just let the tape keep rolling, cut to black, or splice together. The unnecessary mythology that shrink-wraps each short film is so intoxicating at this point that I’m sort of glad these are VOD as I’d hate to sit through any more of this trash in future installments. They’re the equivalent of those irritating screen games that arenas employ during halftime — y’know, the ones that promise frivolous things like free foam hands or a T-shirt with a bank logo on it? Just sitting here trying to connect these awfully acted, undercooked segments is enough to run for a cold shower. No, no, no.

Instead, why not learn from the actual pros of found footage? During the film, we discussed the strength of MarbleHornets’ Slender Man series and how it’s managed to pique interest despite a crooked through-line and a rotating creative team. Simply put, they embrace the mystery without ever overselling it. Three films in, V/H/S has already fractured its format with gluttonous camera work, excessive CGI, and now pandering sentiments that are more preachy than legitimately frightening. It’s unfortunate, too, because there’s a lot of talent here that doesn’t deserve to be wedged between this trite nonsense.

RC: “Mumblegore”, as a term, can already be considered passé, as the filmmakers who made up the sub-genre have mostly moved on to bigger budgets and grander visions: Wingard already broadened his palette this year with The Guest, West is helming an epic Western with John Travolta, and Swanberg is back to the intimate, explicit dramedy he built his career on. Still, the term is helpful in delineating the filmmakers of the first film from those presented here, who, aside from maybe Benson and Moorehead, just don’t seem wholly comfortable in the confines of the aesthetic. Mumblegore was coined to reflect how the low-budget, improvised style of filmmaking popularized by the likes of Andrew Bujalski and Swanberg himself was being applied to horror; the found footage aesthetic lent itself to this approach, and shorts like V/H/S’s “Amateur Night” were horrifying because they clashed the banal and horrific so convincingly.

The most common question in found footage horror (aside from, “Why are you filming this shit?”) is, “Who edited this shit together?” That question becomes especially unavoidable during Viral, which is just a bit too slick for its own good. Especially the first short, “Dante the Great”, a mockumentary that betrays everything scuzzy and suggestive about the original’s best shorts. “Vicious Circles”, on the other hand, goes for slapdash, but crumbles under the weight of its excess (not to mention the horrible CGI gore; seriously, CGI blood never looks good). Even Vigalondo, brilliant as his entry is, boasts a vision that can’t be contained in the lens of a single camera.

When the original V/H/S presented a short filmed via Skype, it still felt visually consistent with something you’d find on a water-damaged cassette. Unfortunately, this isn’t the case with V/H/S: Viral, which may as well been called V/H/S: Blu-ray.

MR: Christ, where do you start? How about Justin Welborn’s pathetically histrionic performance as the title character? Or the unbelievable number of mounted cameras? Or the fractured tone? Gregg Bishop’s short was an absolute disaster and a total embarrassment for the cast and crew involved. How the producers of V/H/S Viral ever came to the conclusion that this should open up the film is about as baffling as the goddamn through-line. [Grade: F]

RC: A psychotic magician? A cape that’s truly magical? These aren’t bad ideas. Other V/H/S entries are great at finding inspired riffs on Twilight Zone archetypes. “Dante the Great”, however, is not. It’s hard to even classify it as a found footage film. Found footage thrives on a kind of controlled sloppiness; “Dante the Great” is presented as a polished documentary. Because of this, it lacks the stakes, ambiguity, and limited perspective of the series’ best shorts. [Grade: D-]

MR: Nacho Vigalondo’s sordid tale of parallel universes gone wrong was a perfect reminder of why the V/H/S series is worth celebrating. Similar to Timo Tjahjanto and Gareth Huw Evans’ “Safe Haven”, this short offers an expansive attempt at the genre by tickling the imagination with just enough details to keep the mind terrified and perplexed. There’s one shot midway through that will stick with me for years and a certain artifact that has left me wondering, What’s in the bag, what’s in the bag, what’s in the fucking bag? [Grade: A]

RC: Vigalondo’s brain must resemble an Escher painting. Twists, misdirection, and straight-up weirdness abound in the Russian nesting dolls he calls films, including his latest full-length, Open Windows. But Open Windows is practically a well-made play when compared to “Parallel Monsters”, a soupy bastion of perversion and body horror. To say much of anything is to spoil it, and that’s a compliment unto itself. [Grade: A]

MR: I guess it was only a matter of time before someone took the concept of skateboarding videos and applied them to horror. That’s exactly what Justin Benson and Aaron Moorehead accomplished with “Bonestorm”, which dumps a handful of bratty SoCal youths amidst a ritualized Mexican cult. In a way, it’s a crude re-imagining of “Safe Haven” with Raimi-esque tonal shifts, but the film itself has a grasp on its own terrifying isolation and keeps the mythos at an optimal level of mystery. Who knew skateboarders could rival Ashley Williams? [Grade: B]

RC: Benson and Moorhead are also behind 2012’s underrated mindfuck Resolution, which intrigued via looniness and meta-commentary. “Bonestorm” isn’t nearly as intricate as its predecessor, but benefits from the commitment and playfulness it provides its escalating insanity. Also, some of V/H/S: Viral’s best performances can be found in “Bonestorm”; the SoCal skater shits are rendered with a youthful vigor that absolves their obnoxiousness, and the rapport between the young actors feels thoroughly modern, helping to enhance the age-old horror they awaken. [Grade: B+]