Film Review: The Best of Me 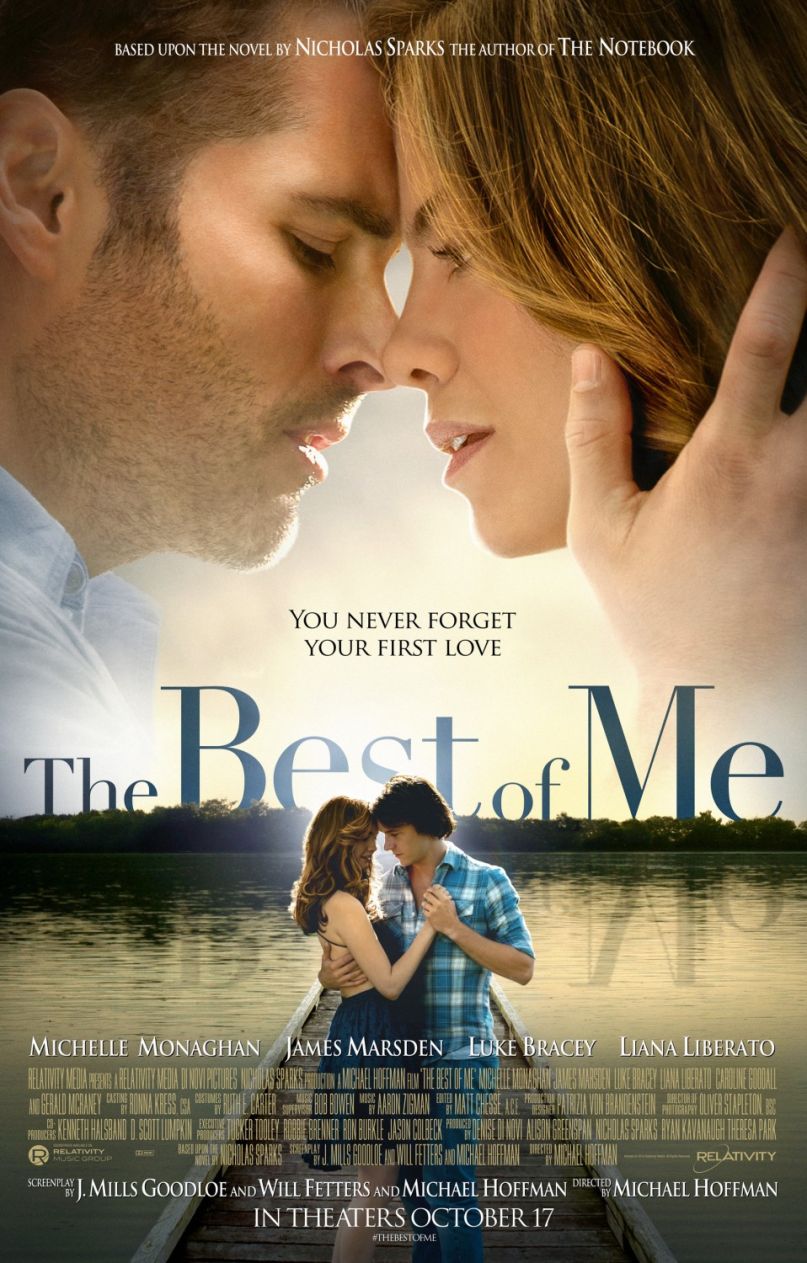 When the opening credits announce that “A Nicholas Sparks Production” is about to begin, prepare for at least one of the following:

— A love story set in the South.

— One of the paramours is rich and the other is poor. The poor one is a “rebel.” The rich one is said to be “slumming it.” The rich one’s parents disapprove.

— Displays of love include jumping into a body of water, kissing in the rain, cuddling by the fireplace, and using the words “fate,” “destiny,” “stars” and/or “the lucky ones.”

— The man makes a grand gesture (The Notebook: Noah builds Allie a house; A Walk to Remember: Landon names a star after Jamie; The Last Song: Will protects Ronnie’s sea turtles, etc.)

— A tragic accident or misunderstanding.

The Best of Me checks every item off of this list, with three extra checks for death.

In 1992, a couple of Louisiana high schoolers, wrong-side-of-the-tracks Dawson (Luke Bracey) and pretty rich girl Amanda (Liana Liberato), fall in love. They jump into a pond, kiss in the rain, and cuddle by a fireplace. A tragic accident tears them apart. Twenty-one years later, they reunite, now in the bodies of James Marsden and Michelle Monaghan. They banter and reminisce. He grows her a garden.

Can Dawson and Amanda rekindle their flame? Is it too late? Um, doesn’t this sound a bit too familiar?

Alas, the problems with this wannabe weepie from director Michael Hoffman (The Last Station) extend far beyond its paint-by-numbers plot. Let’s start with the casting.

Bracey looks absolutely nothing like Marsden, or even Paul Walker, for that matter, who prior to his 2013 death in a car accident was originally cast as the older Dawson. Marsden has ice-blue eyes, a slim nose, and chiseled features; Bracey has hazel eyes, a wider nose, and a mop of sandy-colored hair framing his much longer face. The disparity is so jarring that when Marsden is recognized as “Dawson” in his hometown 20 years later, it makes no sense; how could anyone look at Marsden and see an older version of Bracey? Liberato and Monaghan could pass for sisters, maybe, but even that’s a stretch. Suspension of disbelief worked much better in The Notebook, with the elderly couple being 50+ years older than their younger counterparts. Here, with just two decades removed, the differences are way too obvious and distracting.

(Read: The Curious Career of James Marsden: A Roundtable Discussion)

Another element that worked better in The Notebook and even The Last Song was the chemistry between the two leads, which also happened to be the best aspect of both of those films (unsurprisingly, Ryan Gosling and Rachel McAdams dated for years after filming The Notebook, as did The Last Song’s Miley Cyrus and Liam Hemsworth). By contrast, Dawson and Amanda are the revamped version of Dawson and Joey from Dawson’s Creek: sold as “destined” when they are actually as flat as week-old 7 Up, or, to be generous, pre-sliced Wonder Bread.

The Best of Me’s chemistry lives in the idea of a second chance at first love — would you take it if you could? — but not between the actors, unfortunately. Monaghan has hitched herself to some stellar projects over the years (Kiss Kiss Bang Bang, True Detective), but she is not the most appealing of actresses, and her cool, detached screen presence does not serve romantic storylines well. In fact, she and Marsden are downright painful to watch as lovers. From their first awkward “hi” to their stagey, vanilla missionary sex, they emit exactly zero sparks. And their grand romantic declarations, most notably Marsden’s “I’m gonna trust in the stars!”, got big laughs in my theatre. Another guffaw moment comes with Marsden instructing Monaghan to float on her back in the pond, to better gaze up at the sky in … awe? This is The Best of Me‘s attempt at a “Jack, I’m flying!” moment, and it fails spectacularly.

To Bracey and Liberato’s credit, they fare slightly better in the flashback scenes, digging with gusto into the script’s more meaty Romeo and Juliet material, but their charge is still fizzly at best. And the mean old fathers trying to keep them apart, a hick sociopath (Sean Bridgers) who beats Dawson bloody and a swarmy Southern tycoon (Jon Tenney) who offers Dawson $80,000 to stay away from his daughter, are so cartoonishly awful that everything else, including the love story we’re supposed to be rooting for, turns grotesque and unsavory as a result. Warning: This film contains gratuitous bouts of face punching, to the point that I wondered if Fight Club’s bruisers took less hits.

But wait! The Best of Me isn’t all bad. At least Liberato looks like an actual 18-year-old, despite Bracey looking a hard 25, and her chubby, cherubic face, pimples visible under her foundation and all, is by far the most expressive of the four leads. Dawson’s surrogate father figure Tuck (Gerald McRaney) delivers the film’s most heartfelt moment with one tear-filled line. And the hugely talented Schuyler Fisk makes an appearance towards the end as an old friend of Dawson’s, making me wish she had been picked for the lost love over Monaghan. Seriously, where’s her leading role?

Memo to Team Sparks: Try something different, if you’re up to the challenge, because the same old story is officially stale.