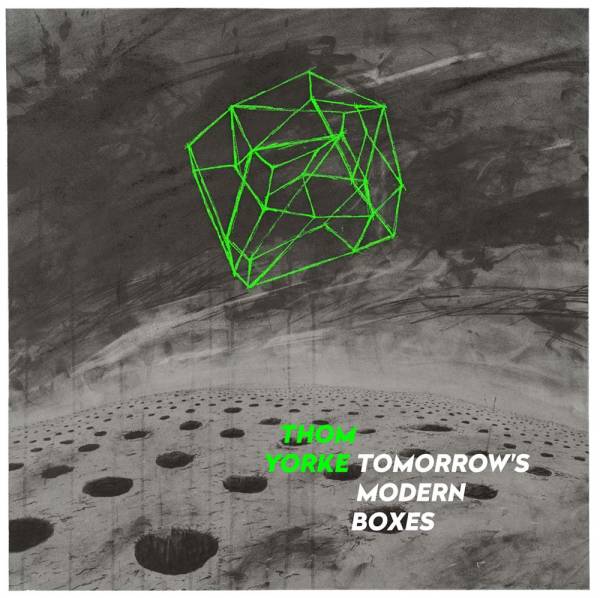 Thom Yorke dances. That’s what he does now. He dances through YouTube windows, through .gifs spangled across Tumblr, through well-lit arena stages. Even when he’s not performing any discernible moves, he’s dancing; look at the way his new video for “A Brain in a Bottle” was reported when it materialized last week along with the rest of Tomorrow’s Modern Boxes. Yorke thrashes in front of a lens, and we see him dance.

“Think I’m going to go to pieces now,” he sings over a beat that threatens the same. He leers close to the camera, the wrinkles on his skin captured in detail, twitching like an iguana filmed in time-lapse. His greying, unwashed hair is bunched at the back of his head. Later, he stands with two red boxing gloves on, pale arms sprouting from a black muscle tee, like he’s daring anyone to comment on the frailty he’s exposed. In his previous dancing videos, he seemed to play characters; “Lotus Flower” starred Black Hat Thom Yorke, while Brown Suit Thom Yorke dances with his twin in “Ingenue”. But Brain in a Bottle Yorke looks unshielded. The song was released under his birth name. This one might just be him.

For someone who used to bounce around under bleached locks in an effort to take the role of rock star very, very seriously, Yorke now wields his aging with grace. He’s a dad with a ponytail who would rather put a macro lens on his uncovered skin than brush away the wrinkles. Tomorrow’s Modern Boxes, his second solo album (following 2006’s The Eraser), doesn’t aim high or far from what he’s been working on with Radiohead and Atoms for Peace. It’s a muted album of subtle electronics clasped around the singer’s seemingly ageless voice.

Just as The Eraser felt in some ways like a preamble to Radiohead’s In Rainbows, Tomorrow’s Modern Boxes plays like runoff from 2011’s The King of Limbs. Yorke’s piano, as reliable as his lemony falsetto, rumbles throughout, paired with soft-edged beats and synthesizers that wobble in and out of focus. He’s more preoccupied with texture than structure; these songs wouldn’t hold up if played acoustically, like most of Radiohead’s and a few from The Eraser do, but they push Yorke’s talents to certain uncomfortable extremes.

There’s an uneasy Franken-noise at the back of “Interference” that corrodes the line between Yorke’s voice and an overdriven synth. On “The Mother Lode”, echoes and loops twist space between Yorke and the beats that enclose him. “There Is No Ice (For My Drink)” turns a brief vocal clip into a bristling drum pattern, as though mouth sounds and machine sounds were interchangeable, indistinguishable. Where does the human fit in when the mechanical has so much power? That tension can be hard to hear, but it keeps Yorke’s placid delivery from sinking into the grey.

The central conceit of Tomorrow’s Modern Boxes is a fertile one in theory, but Yorke does his best work when he has someone else’s engineering to play in. His vocals can add that last stroke of genius to a mutant electronic track, like “…And the World Laughs with You” from Flying Lotus’ 2010 Cosmogramma. On the 2011 single collaboration between Burial and Four Tet, Yorke’s voice let “Mirror” and “Ego” blossom into full club fodder. He’s got an anxious lilt that slides perfectly into Will Bevan’s irrepressibly lonely beats.

On his own, though, Yorke isn’t much of a beatmaker. His unassisted arrangements have always been cautious, almost polite, like he’d rather simmer indefinitely than let himself boil over. Tomorrow’s Modern Boxes works best on its A-side, where Yorke’s vocals mesh more naturally with the booby traps he sets up for them. But it runs out of steam by its midpoint, and its 39 minutes feel much longer. “A Brain in a Bottle” coils with the album’s only real sense of urgency. From there, it deflates.

As a $6 release sold through BitTorrent, and apparently a teaser for a Radiohead record in the works, Tomorrow’s Modern Boxes is perfectly serviceable. Yorke chose a modest delivery method for a modest album, hinting that the real goods have yet to come.

Essential Tracks: “A Brain in a Bottle”, “Interference”