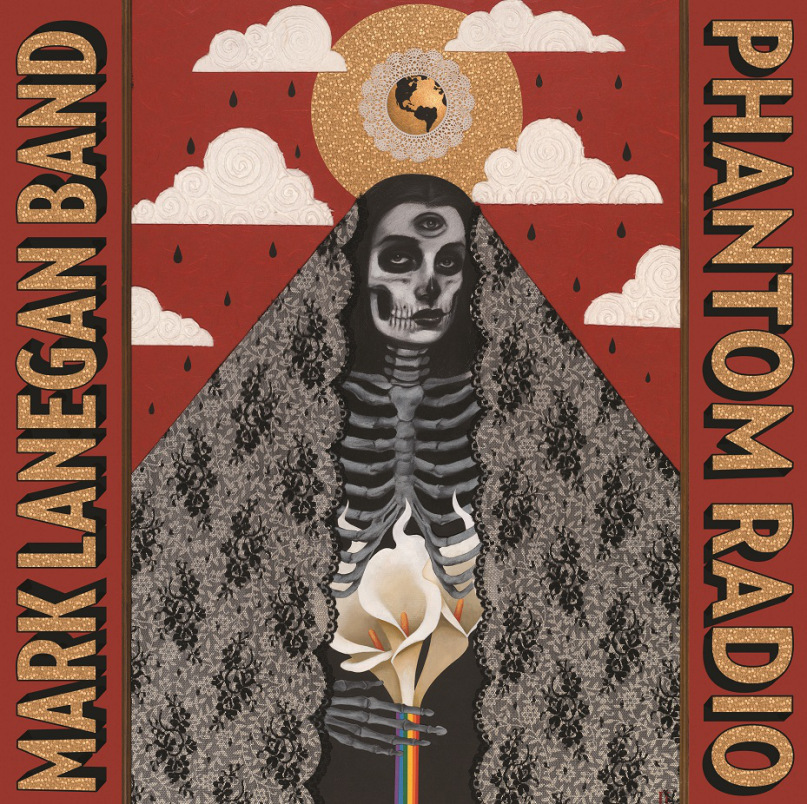 Mark Lanegan has traveled a long way from the germinal folk rock and acoustic blues days of his solo career, an outset that has made his recent detour toward more synth- and beat-driven fare both curious and intriguing. Phantom Radio‘s five-song teaser, No Bells on Sunday, confirmed where Lanegan’s true north currently runs, as he continued to tinker with and master the electronic arrangements that revitalized his patented dead-slow rock on 2012’s Blues Funeral. As on that album, No Bells revealed that Lanegan’s primary challenge remains negotiating the balance between instrumental stretches and vocals — not always discerning between when his silence creates tension and when it causes a song to bloat or lull. Those instincts have been largely refined on Phantom Radio, making for a finely tuned 38-minute album that wastes no time in delivering us down Lanegan’s dark stretch of highway. At the same time, though, the record can’t help but make one feel that the singer’s ongoing journey down this path, even the wrong turns, has been more compelling than this particular destination.

The driving opening song, “Harvest Home”, quickly reintroduces us to Lanegan’s dark environs on the back of glowing guitars and tension-ratcheting synths. Once again, we find him emotionally and spiritually on the lam. “Black is a color/ Black is my name/ I need something to help me chase the devil away,” he alerts us, drawing from his trusted lexicon of salvation, transgressions, and vice, the abundance of the latter two leaving the former seemingly always just out of reach. The more beat-oriented “The Killing Season” covers equally bleak and dire ground. “Skeletal hands around my throat,” snaps Lanegan before his perfectly aging voice slumps down into his throat. The most growth in Lanegan’s brave new world of drum app composition can be heard on “Floor of the Ocean”, which features his longtime girlfriend, Shelley Brien, on backing vocals, and “Seventh Day”. Both are the type of hazy, drifting songs that Lanegan might once have let wash right out to sea on a tedious recycling of beats, never to be heard or cared about again. Here, though, he reins in the arrangements, easing into and accelerating out of instrumental stretches with purpose, like a car gaining traction as it takes a curve.

The album’s shortcomings are less about what’s on the album and more what’s absent. So many of the musical gains Lanegan has made over his last couple releases — tested and hard-won styles and formulas you’d assume would be here — are missing, like hitchhikers picked up along an extensive journey and then dumped just a few miles outside of town. Nothing here runs white-hot like “Sad Lover” (No Bells on Sunday), pricks like the hypodermic “Quiver Syndrome” (Blues Funeral), crunches and rattles windows like “Riot in My House” (Blues Funeral), or sprawls and reimagines itself like “Smokestack Magic” (No Bells on Sunday), any of which could have helped maintain the drive and momentum that “Harvest Home” boasts coming out of the gate. Consequently, the stripped-down, acoustic interludes (“Judgment Time”, “I Am the Wolf”, and “The Wild People”) — though interesting enough and certainly within Lanegan’s wheelhouse — feel more like speed bumps than well-placed rest stops, and even the delicate, brokenhearted standout “Torn Red Heart” begins blending into the scenery of a second half stuck in one gear. Lanegan has clearly worked out a lot of the kinks on Phantom Radio; unfortunately, a smoother-running ride doesn’t always mean a better one.