Film Review: This Is Where I Leave You 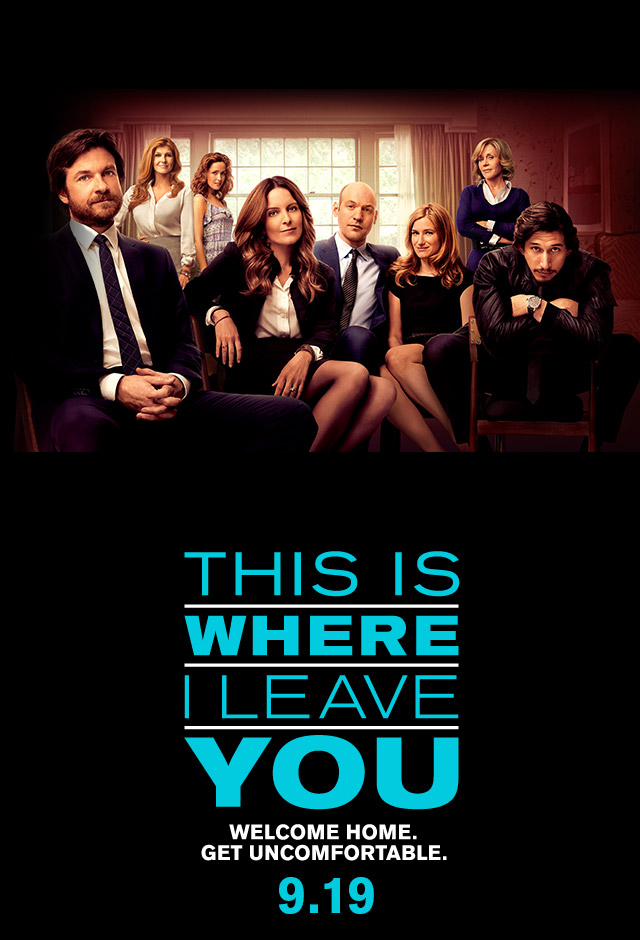 I should have left two seconds in, right at the first opening musical queue. It’s some song that sounds like Rusted Root, but with an Irishy guy that sings “time” as “tye-uhm,” and it tells you this is gonna be a movie with whimsy and melancholy n’ shit.

I should have left five minutes in, when Judd (Jason Bateman) walks in on his wife humping his horrible boss (Dax Shepard as a dickish shock jock). Any time a guy gets off work early in the first scenes of a movie, you just know he’s gonna walk in on his wife bumping uglys. But that happens (but only to movie characters. If anybody has really experience the hackneyed walk-in-on-wife-humping bit, my condolences, and I don’t believe you). But whatever. It gives Jason Bateman another excuse to get his hangdog on.

And then I should have left at almost every scene after that, because there isn’t a damn thing we haven’t seen 100 times already in 104 minutes of Stevia that is Shawn Levy’s This Is Where I Leave You. But, much like the characters who are stuck together in this paint-by-numbers Dramamine dramedy, I got a tiny touch of the Stockholm Syndrome being cramped in with them, all due to the years of goodwill earned by the wasted cast. But now that I’m free, I never want to go back.

The premise: dear daddy Altman dies. Mom makes the clan of kids come home for an unexpected Shiva, claiming it was Dad’s final wish for his family to spend seven straight days together. That’s a decent enough hook to hang a movie on, and luckily she gave birth to a cast that should make this work.

Judd’s the brother who acts like Jason Batemen. He’s been cuckolded. He’s hiding the fact that his wife boinked his boss from the family. And his life’s off-track. Tina Fey is a hard-drinking mom married to a dick. She pines for her high school boyfriend across the street (Timothy Olyphant) who she loved passionately until they had a car accident and he got a brain injury. And her toddler is having trouble being potty trained, but it’s sorta a metaphor for growing up? Boy, her life is really off-track. Poor Corey Stoll is stuck as uptight brother Paul, the responsible one running dead dad’s store. He can’t get his wife pregnant and nobody likes him. Oh, he’s off-track. And then there’s the runt of the litter, Phillip (Adam Driver). He’s so wacky and man-childish and will he ever grow up? Man, his life is off-track. Oh, and mom. She once wrote a best-selling book, cribbed from her kids’ diaries, called Cradle and All, and some of them are still sore about it.

Over the week, the family bonds, fights, bonds, and fights, all while sprouting out dialogue from what I guess is a good book, but which I have no interest in ever reading now. Eventually, everybody has an epiphany about something or other. They say stuff along the lines of “This family isn’t perfect, but it’s MY family.” Then jerks get their comeuppance. And our main hero, Judd, discovers that he just has to let himself go. He realizes, “I’ve spent my life playing it safe to avoid being where I am right now.” Natalie Portman surrogate and reignited high school flame Penny Moore (Rose Byrne) tells him, “Cut yourself some slack, Judd. Anything can happen. Anything can happen all the time.” Yeah, it’s that kind of movie.

In many ways, it’s Garden State, Parenthood, and Home for the Holidays with a splash of The Big Chill. And that’s a damn shame with a cast like this. I kept wishing I could pull some Purple Rose of Cairo magic and escort them all to a movie like Beautiful Girls, which shares the same sentimental coming-back-to-your-small-town hooey, but earns its hugs.

But there’s just no way for the cast to rise above this stock material. It’s a movie that goads you at every moment with its overbearing strings and twinkling pianos (the score sounds like the theme music to St. Elmo’s Fire), plus some Lumineers-esque folk anthems and Cyndi Lauper to remind you these characters are in their 40s. Nothing’s subtle. Every heart-to-heart is a huge moment, man, and “love should be unpredictable” and “love is a cancer” but we survive it n’ shit. There are so many attempts at profundity that ring as hollow, as some dolt telling you to “dance like nobody’s looking.” And 99% of the jokes just flop, and they’re usually about potty training or Fonda’s big boob job and libido (Klute’s all about the nasty because “It’s just sex,” and even lobs a titty-fucking joke that bombs).

Here’s what I want. First, a vehicle worthy of Bateman’s comic delivery and intrinsic pathos. He’s great in this, but dependably so. It feels like a script he’d make fun of. Also, Tina Fey should shy away from trying drama ever again. It just doesn’t suit Bossypants. When Tina cries, armies of the Fey-smitten fellas should feel like rushing to wipe her nose. But, nah, her big scene just doesn’t ring true. But it’s a notch better than Admission, and so is stomach flu. Adam Driver is, hands down, the best thing in the movie, and we should have spent more time with him and the scene-stealing Ben Schwartz. Plus, I want that magic movie pot, which comes in the inevitable scene where the brothers toke up. It’s the super pot that only exists in movies … the kind that makes you stand on tables, giggle uncontrollably, and then bond over profound thoughts n’ shit.

“It’s okay to cry or laugh. There’s no correct response,” sexy mama Jane says to her brood. She repeats it later, like she’s giving the audience advice, or perhaps permission. So I tried to follow her words of wisdom. I laughed once. I cried nil. I squirmed often. I felt no inspiration from its endless plodding platitudes. When I finally left This Is Where I Leave You, I was so saddened by all the squandered talent that I couldn’t help but do the Charlie Brown shuffle gag from Arrested Development.