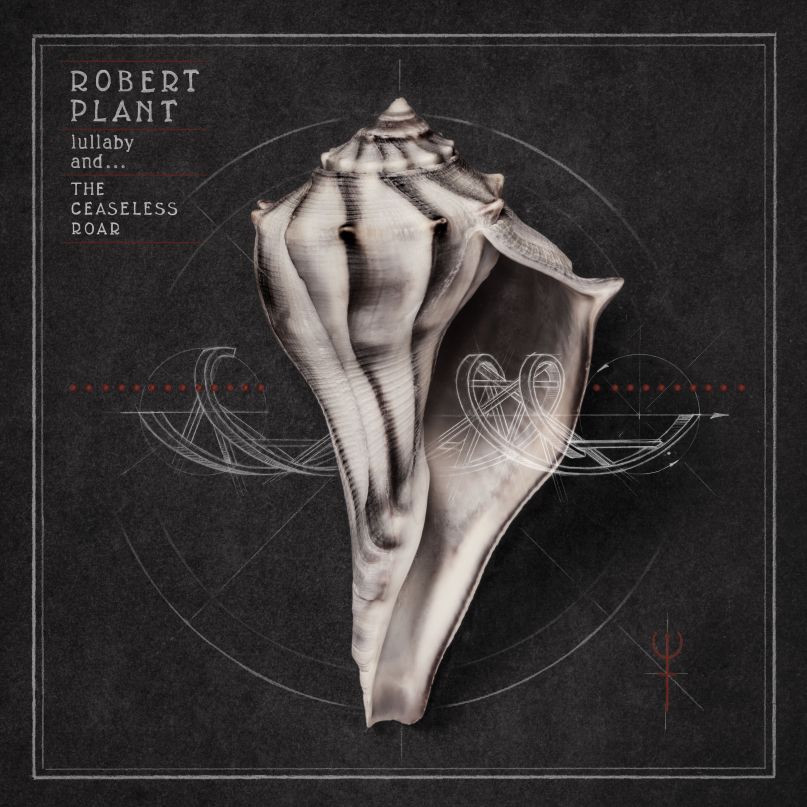 After half a century as a musician, most of which he spent as a primary deity in the rock pantheon, Robert Plant could have rested on his laurels. Few would have criticized him for continuing to rake in residuals and acclaim while retired in a comfortable cottage in the Elysian countryside. But instead of opting for the easy life afforded cultural icons, he has chosen what is surely one of the more difficult tasks of his long career: creating a contemporary album equal parts intimate and experimental. With lullaby and… The Ceaseless Roar, his 10th solo effort, Plant has masterminded an album of confidence and clarity that approaches his work in the halcyon days of Led Zeppelin.

In the process of embracing and expressing this contemporary vision, Plant chose not to speculate on the future and instead gazed back into his own history without filter or hesitation. “The thing is I am not a student, I am a thief,” Plant told The National last June. “I absorb all of it without having a name for it.”

Plant has long been fascinated, even driven, by American rock ’n’ roll, specifically the roots R&B and blues of the Mississippi Delta. Led Zeppelin’s earliest recordings are a thinly veiled homage to their blues predecessors. Later in his career with Zep, and again in recent years, Plant explored the musical traditions of Northern Africa. The music of these seemingly disparate regions is bound by a complex system of cross-cultural influences, but more essentially, both musics are rooted in the universal language of hardship, the triumph of hope, and the will to overcome.

“All I want to do is get that blue note out,” Plant commented in an interview with NPR. “There is a blue note inside my soul, and there are only certain music forms where that actually resonates.” Lyrically, lullaby and… The Ceaseless Roar represents a dark, intimate exploration of that particular “blue.” Certain elements of the album can allegedly be traced back to the dissolution of Plant’s longtime relationship with musician Patty Griffin, and when he purrs, “I often think of you/ The hour before it rains” on “Embrace Another Fall”, his despair is tangible but not overwhelming. Hope lingers at the edges of the darkness. Plant’s heartbreak is not the clothes-rending passion of young love gone bad, but instead the carefully observed and remarked-upon sadness of one who has loved and lost, but lives to love again.

The American South and the lands of the African Sahara are the two most obvious sources, but an intricate web of styles and unique contributions binds lullaby and… The Ceaseless Roar into a coherent whole. The album is full of individual musical flourishes — a twisting bass note, scattering drum fill, or quick but expert guitar solo — that demonstrate that the assembled musicians (collectively known as the Sensational Space Shifters) are more than faceless studio drones. These specifically selected contributors each have a role and the freedom to express themselves within Plant’s broader vision.

“Pocketful of Golden” opens with a scuzzy, industrial riff, an echo of bassist Billy Fuller and keyboardist John Baggott’s work with the likes of Massive Attack and Portishead, that resolves into a snaking figure courtesy of griot and riti virtuoso Juldeh Camara. The two elements, born of musical styles a world apart, connect seamlessly and effortlessly propel the song forward.

Fuller’s programmed beats and the live drumming of Dave Smith suspend an effect that is simply transportive, creating diverse moods that invoke West African landscapes, deep Southern blues jams, and scenes that simply defy categorization. With guitarist Justin Adams sharing composing credits with Plant, the group spins a tapestry of individual prowesses woven together into a whole far greater than the assembled threads.

Ever the icon, Plant’s presence is never at risk of being obscured by the talent of his bandmates. lullaby and… The Ceaseless Roar marks the return of Plant as principal songwriter; his last two albums, Raising Sand (with Allison Krauss) and Band of Joy, were almost entirely composed of selections from the Americana songbook.

Plant’s voice, which once boasted a remarkably high range, has now settled into a comfortable place. Content with observation without hysterics, he now sings in a casual middle register, delivering his lyrics with ease. On “Turn It Up”, a lost and desperate character (“Somewhere East of Tunica/ I’m close to giving up”) turns to the radio for salvation. Despite the encroaching dark, hope remains chaotic and random, but within reach. Snarling dual guitar leads and restless percussion show that Plant hasn’t gone soft with age. He’s simply more intentional with when and how he throws around his swagger.

Near the album’s close, Plant expresses the deepest sorrow on “House of Love”. A sequel/response to his Walking into Clarksdale song of the same name, the story picks up where the first left off. The original “House of Love” was written in the present tense, its narrator watching as a lover prepares to leave. Now, the response is in the past tense as Plant reflects on a once-powerful love that has been burned to the ground.

After a long life full of wild experiences and devotion to music, it should be no surprise that Plant has produced another album full of clarity and vitality. We’re lucky that he was able to create something so remarkable as his “House of Love” burned down around him.

Essential Tracks: “House of Love”, “Rainbow”, and “Embrace Another Fall”