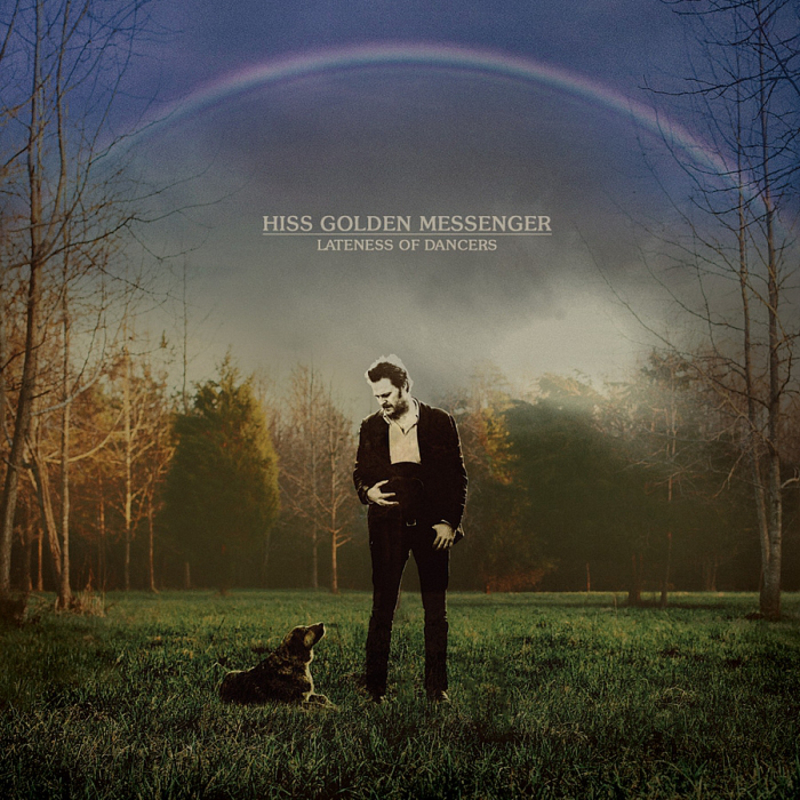 For M.C. Taylor, the longstanding traditions of American music have been a firm guide throughout his career. As the 38-year-old Southern California-raised musician behind roots outfit Hiss Golden Messenger (which he formed in 2007 with his longtime collaborator Scott Hirsch), Taylor’s not just taken on the rustic sounds of his adopted home of the South, specifically Durham, North Carolina, but done so with a fine grasp on the area’s history and folklore. His music is often painted with biblical allusion, detailed and almost mystical references to geography, and a finely tuned emotional perception in his grainy, world-weary voice. When Taylor sings, he delivers a gravitas that’s both room-filling and disarming. Beginning as a member of punk outfit Ex-Ignota and alt country rockers The Court & Spark, Taylor now approaches folk music with an all-encompassing dedication that makes it both transgressive and cleansing.

In 2010, taking in the turbulent economy and his responsibility as a new father, he recorded Bad Debt, his second album, at his kitchen table via a cassette player while his infant son slept. The result was a profoundly intimate, homespun collection of folk music that aimed toward spiritual and personal catharsis, but was largely left unheard after his distributor’s CDs were destroyed in the London Riots of 2010 (it was reissued in 2014). He followed that release with 2012’s Poor Moon, which included a sprawling and revolving cast of backing players, and 2013’s Haw, an earthy and exceptional album named after a river in his home state. With Lateness of Dancers, his fifth proper full-length, Taylor finds himself at his most content and self-assured, grappling with the same existential issues that permeated his earlier material, but now with more grace and ease.

Where most of Hiss Golden Messenger’s work has dealt with themes of redemption, each release felt like a clean slate, songs pursued with a renewed vitality and vigor. Lateness of Dancers, the outfit’s debut for Merge Records, marks another new chapter in Taylor’s quietly constant evolution. Here, he enlists a wide cast of new and longtime collaborators to color the album. Along with Hirsch, who contributes mandolin and pedal steel, Lateness of Dancers finds Taylor reuniting with his now-labelmate William Tyler, whose crunching guitar leads gave Haw its rustic edge. Also joining him are vocalist Alexandra Sauser-Monnig of Mountain Man, whose airy coos pair nicely with Taylor’s gruffness, Megafaun’s Phil and Brad Cook, and many others. These players prove to be Taylor’s best backing group yet, intimately enlivening the songs.

“Lucia”, an old song from The Court & Spark’s discography, opens the record. It’s reimagined and amplified, going from the subdued, ethereal twang of its 2004 original recording to full-fledged Americana à la The Band. While it’s certainly not processed or too sleek, Lateness of Dancers is by far Hiss Golden Messenger’s most polished release. Gone is the homely recording quality that gave efforts like Bad Debt and Poor Moon their bucolic charm, replaced instead by lush and expansive studio flourishes that enhance each folk instrument with clear-eyed engineering. “Saturday’s Song” highlights this new, full-throated sound. Punctuated by Tyler’s bluesy, barreling, Allman Brothers-inspired guitar leads, a spritely strummed mandolin, and a warm piano, the song feels simultaneously lived-in and fresh. Taylor also showcases some of his lyrical prowess in one of his most-straightforward songs yet, a song about being ready for the weekend. “When Saturday comes, I might lose control,” Taylor slyly warns. “I’m gonna get a little crazy/ I might drink some whiskey, let me be.” While the song covers well-trodden territory, Taylor adds nuance to the trope with some melancholy (“I’m gonna wake up Sunday, wanna be happy”) and warmth (“Oh I got my babe, waiting at home for me”).

Lateness of Dancers sees Taylor coming back to various themes from his previous work. Songs like highlight “Mahogany Dread” take on apocalyptic imagery, like “The dead are here, they never go away,” while others, like “Black Dog Wind (Rose of Roses)”, find him again taking in the geography: “We gotta cross that river with that black dog wind.” Like he did with Poor Moon and Haw, Taylor reworks Bad Debt material for the new album. Here, he takes closer “Drum” and spruces it up. On Bad Debt, the song’s ramshackle recording made it breathlessly immediate, with Taylor’s call to “take the good news, spirit it away” like a dinner table request. Lateness of Dancers‘ version, with its exuberant fiddle and backing vocals, give the song a joyful, triumphant shine.

Though he grew up with the West Coast sun and palm trees, Taylor’s relocation to North Carolina proved to be a much more fitting home for the songwriter. He’s documented the region by teaching a folklore class at the University of North Carolina Chapel Hill as a day job, along with his stint as a contract folklorist for the state, setting up live field recordings of traditional music in the Piedmont region. With his new home so profoundly shaping his music, he’s laid his case as one of Americana’s most essential songwriters. Channeling the traditions of Southern music without getting caught up in it, Lateness of Dancers proves the genre’s vitality.